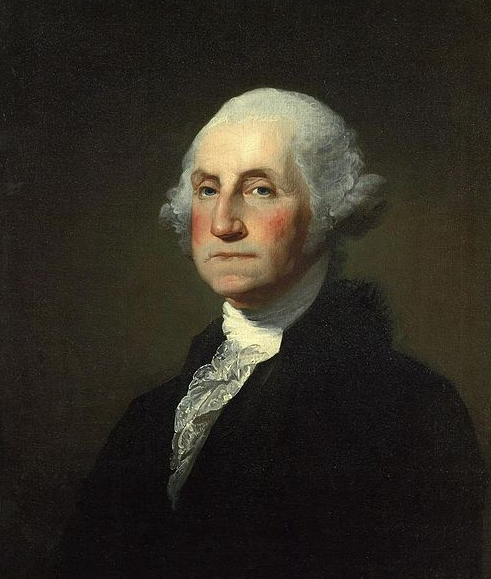 The following recount of this historic visit is from the Touro Synagogue website, read more here – http://www.tourosynagogue.org/history-learning/gw-letter

The President had visited the New England states the previous fall “to acquire knowledge of the face of the Country the growth and Agriculture thereof and the temper and disposition of the Inhabitants towards the new government.” He deliberately bypassed Rhode Island, which had refused to call a state convention to ratify the federal Constitution at that time. He decided to make a public trip to the state only after May 1790 when Rhode Island ratified the Constitution. Such a special visit would not only focus the goodwill that Rhode Islanders felt toward him as the hero of the Revolution, it would lend his personal prestige to the state’s leaders.2

Washington, Jefferson, and the others had a second agenda as well. Twelve amendments to the Constitution had been proposed in the Congress. The third amendment addressed the issue of freedom of religion and of the press. Congress passed and sent all twelve amendments to the states for ratification on September 25, 1789. State legislatures were required to consider the amendments one by one and ratify them individually. Over a period of months, the state legislatures sent the amendments back to Congress, ratifying some and disapproving others. On December 15, 1791, Virginia approved ten of the twelve proposed amendments and became the tenth and last state required to do so before the amendments became law. The first two proposed amendments had been rejected by three-quarters of all the states and could not be adopted. Therefore, the original Third Amendment, prohibiting the establishment of a state religion and freedom of the press, became the newly ratified First Amendment. Virginia, Massachusetts, Connecticut and Georgia were still debating the amendments in August of 1790 when the President visited Newport.

We now behold a government, erected by the Majesty of the People …

Washington and his group were greeted by Newport’s leading citizens and representatives from the many religious denominations present in the city, including the Jews. Included in the throng that greeted Washington may have been some of Newport’s slaves, for individuals of African descent made up one-quarter to one-third of Newport’s population during the colonial period. Politicians, businessmen, and clergy read letters of welcome to the President. Among them was Moses Seixas, one of the officials of Yeshuat Israel, the first Jewish congregation in Newport. The address read by Seixas was an elegant expression of the Jewish community’s delight in Washington as leader and in a democratic government. Seixas wrote:

Deprived as we heretofore have been of the invaluable rights of free Citizens, we now (with a deep sense of gratitude to the Almighty disposer of all events) behold a Government, erected by the Majesty of the People—a Government, which to bigotry gives no sanction, to persecution no assistance—but generously affording to All liberty of conscience, and immunities of Citizenship: deeming every one, of whatever Nation, tongue, or language, equal parts of the great governmental Machine…4

A few days after leaving Newport, the President wrote to the citizen groups who had addressed him at Newport, thanking them for their hospitality and graciousness. First among them was his letter to the Jews. More than simple courtesy, the letter reflected the policy of the new government toward those whose religious beliefs were perceived as different. Washington echoed Seixas’ phrase “which to bigotry gives no sanction, to persecution no assistance,” thus confirming the sentiments expressed in the Seixas letter. The President’s words also helped to define the role of the Federal government in matters of conscience.

The Government’s role in issues of religion was a particular sticking point in the debate over ratification. In Europe and in England, state-sponsored religion was the norm. If one’s beliefs were different from those of the official Church, the consequences could be severe. While there was no “official” religion in the original states, their colonial charters often did not make a distinction between religion and government. It was understood that a just government was built on “Christian” principles and that non-Christians were to be “tolerated” for their beliefs (frequently with the hope that “Jews, Turks, and Infidels” would become Christian). A few states taxed their citizens to support religious organizations; in others, the rights of minority groups such as Baptists, Presbyterians, Catholics and Quakers were restricted. In most states, non-Christians were denied the rights of full citizenship, such as holding public office. Even in religiously liberal Rhode Island, Jews were not allowed to vote or become naturalized citizens, although their status as merchants and economic contributors protected them from overt discrimination.

The clause in the First Amendment that reads “Congress shall make no law respecting an establishment of religion, or prohibiting the free exercise thereof” did little to erase these injustices. Its intent was to prevent the government from creating an official “state” religion and to guarantee the absolute right to a free exercise of religion – at least at the Federal level of government.

However, to get this and the other amendments passed by the required majority of the states, Washington sought help from both politicians and clergy. Following his inauguration in April of 1789, Washington received many letters of congratulation from religious organizations (particularly those that had experienced discrimination in this country) each praising his leadership in the fight to maintain religious liberty in the new country. Washington responded to these letters, clearly expressing his desire to see religious freedom as the law of the land. He wrote to the United Baptist churches in Virginia, the General Assembly of Presbyterian churches, the Methodists, the Congregational ministers, and in March of 1790, wrote to the Roman Catholics. Each letter stressed the principle of religious liberty and, as in his address to the annual meeting of the Quakers, pledged that the new country would preserve the right to worship “each according to his conscious and to his God.”

American Jewish congregations were also eager to send greetings to the new President. In June of 1790, the leaders of New York’s Shearith Israel (following up on a proposal offered by Manuel Josephson of Mikve Israel in Philadelphia), circulated a letter to the Hebrew congregations of Newport, Philadelphia, Richmond and Charleston, asking that the congregations join together in writing to Washington. This effort was apparently prompted, in part, by the address sent in May 1790 to President Washington by the Mikveh Israel congregation of Savannah, Georgia, acting alone. Writing on behalf of the Hebrew congregation in Newport, Moses Seixas replied on July 2, 1790 that his congregation, while sympathetic with the idea of a joint address, was reluctant to give offense to the state legislature by addressing the president before that body had done so. Consequently, his congregation waited until the President visited Newport in August of 1790 to address him separately. The remaining congregations in New York, Richmond, Philadelphia and Charleston prepared a joint letter that was not sent until December, 1790.

Washington’s response to the Newport group’s address, the Letter to the Hebrew Congregation of Newport, Rhode Island, was sent August 21, 1790. As in other letters to Jewish congregations, the President explicitly acknowledges Jewish participation in the new nation. However, the Newport letter stands out for its clear and unequivocal language. Washington writes, “May the Children of the Stock of Abraham, who dwell in this land, continue to merit and enjoy the good will of the other Inhabitants.” He goes on to oppose the mere “toleration” of religious differences and instead emphasizes religious liberty in “the exercise of inherent natural rights,” echoing the Declaration of Independence.

Although this letter carries with it a unique and cherished significance for American Jewry, in many ways it is a treasure of the entire nation. America, as de Tocqueville [a French political thinker and historian who visited America in the early 1800s] famously wrote, had been “born free,” unfettered by the religious and social bigotries of medieval Europe. The United States, although initially founded by people from the British Isles, had well before the Revolution become a haven of many peoples from continental Europe seeking political and religious freedom and economic opportunity. The new nation recognized this diversity for what it was, one of the country’s greatest assets, and took as its motto E Pluribus Unum—Out of Many, One…. The separation of church and state, and with it the freedom of religion enshrined in the First Amendment to the Constitution, has made the United States a beacon of hope to oppressed peoples everywhere.5

Washington’s commitment to religious liberty, the involvement of all people in the new democracy and the campaign for passage of the Bill of Rights combined on that August day in Newport, Rhode Island. The result is the Letter to the Hebrew Congregations of Newport, a profound statement of the values that make America an example to the world.

While I received with much satisfaction your address replete with expressions of esteem, I rejoice in the opportunity of assuring you that I shall always retain grateful remembrance of the cordial welcome I experienced on my visit to Newport from all classes of citizens.

The reflection on the days of difficulty and danger which are past is rendered the more sweet from a consciousness that they are succeeded by days of uncommon prosperity and security.

If we have wisdom to make the best use of the advantages with which we are now favored, we cannot fail, under the just administration of a good government, to become a great and happy people.

The citizens of the United States of America have a right to applaud themselves for having given to mankind examples of an enlarged and liberal policy—a policy worthy of imitation. All possess alike liberty of conscience and immunities of citizenship.

It is now no more that toleration is spoken of as if it were the indulgence of one class of people that another enjoyed the exercise of their inherent natural rights, for, happily, the Government of the United States, which gives to bigotry no sanction, to persecution no assistance, requires only that they who live under its protection should demean themselves as good citizens in giving it on all occasions their effectual support.

It would be inconsistent with the frankness of my character not to avow that I am pleased with your favorable opinion of my administration and fervent wishes for my felicity.

May the children of the stock of Abraham who dwell in this land continue to merit and enjoy the good will of the other inhabitants—while every one shall sit in safety under his own vine and fig tree and there shall be none to make him afraid.

May the father of all mercies scatter light, and not darkness, upon our paths, and make us all in our several vocations useful here, and in His own due time and way everlastingly happy.