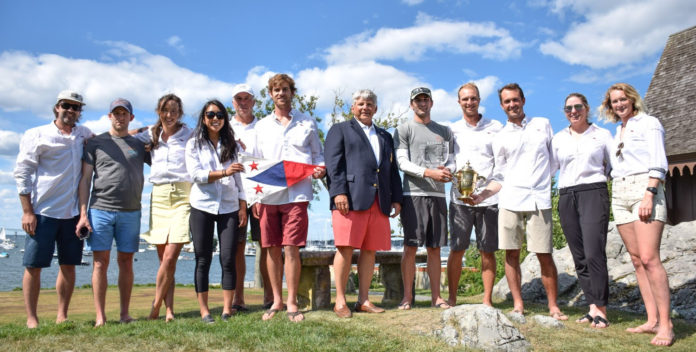 In keelboat team racing, where so much depends upon a dozen sailors acting as if they are sharing the same brain, familiarity and consistency are a recipe for success. With a roster that included nine returning sailors from last year’s winning team, the St. Francis Yacht Club (San Francisco) successfully defended its Morgan Cup championship, beating Corinthian Yacht Club (Marblehead, Mass.) and Yale Corinthian Yacht Club (New Haven, Conn.), which tied on points for second, with Corinthian winning the team breaker. The win by St. Francis is the fourth straight Morgan Cup championship, and the fifth in the past six years, for a yacht club from the West Coast of the United States.

“In team racing, things happen a lot more quickly than in fleet racing; you have to be a bit more spontaneous and bit more ready to do a tack, a jibe, a 360, a pin, a hook, etc.,” says Michael Menninger, St. Francis team captain (at right, red shorts). “Things are changing constantly in team racing, and communication is really key, having a crew that is able to keep calm under all the pressure and execute the maneuvers.”

The New York Yacht Club Invitational Team Race Regatta for the Morgan Cup was first run in 2003 and has become one of the most prestigious trophies for keelboat team racers. Clubs from around the country, and abroad, apply for an invitation, and the field regularly includes numerous collegiate All-American sailors along with former Olympians and world and national champions. The regatta is sailed out of the New York Yacht Club Harbour Court in the Club’s fleet of identical Sonar sailboats, with each team composed of three crews of three or four sailors. The Morgan Cup was presented by the members of the New York Yacht Club to J. P. Morgan as a token of esteem and a mark of appreciation of his service to the club as Commodore, 1919-1921, and is dedicated as the perpetual award for the winning team.

Two days of sparkling sunshine and reliable breeze enabled the race committee to whip through two complete round robins for the 10 competing teams. St. Francis was the strongest team over the first two days, winning 15 of 18 races to carry a two-point lead into the third and final day. The field was split in half for today with the top five teams racing for the overall championship while the bottom five competed in a separate round robin. With each of today’s races worth double points, all five teams in the Gold Round Robin started the final day with a mathematical chance at the championship. But St. Francis held serve, winning two and losing two, while none of the teams behind were able to run the table and challenge the San Francisco team for the title.

“I felt like we, on average, had really good starts and good first decisions,” says Menninger. “By the first mark, we were into a winning position most races and able to hold on. You always have an advantage when you start better than the other team. And then, of course, we did have a few races where did start behind or find ourselves in losing combinations, but somehow we were able to claw our way back.”

According to Menninger, the team set its sights on winning this year’s Morgan Cup shortly after claiming it for the first time in the club’s history in 2018.

“After winning last year, we decided we wanted to keep ideally the entire team together,” says Menninger, “but there was a crew change [a new event rule required each team to have at least four sailors of each gender], which we were excited and happy about because we have a deep pool of women members. So we brought on a few new women, and they did a fantastic job. We had a great team again.”

The New York Yacht Club’s series of elite team races will continue next weekend with the Hinman Masters, and conclude August 23 to 25 with the Grandmasters Team Race. Full details on both of those events can be found here. 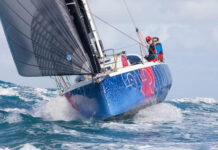 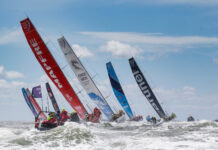 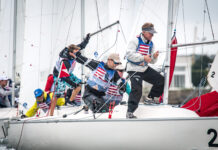