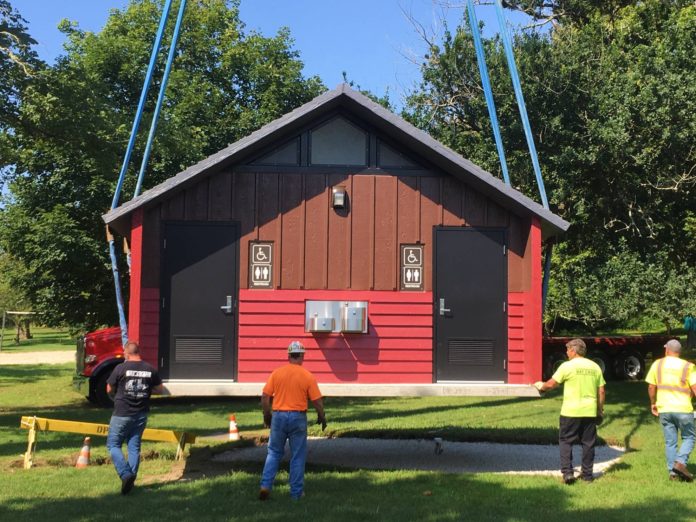 New restrooms are coming to Miantonomi Park this month, the City of Newport announced in a press release today.

Earlier this month, a new restroom building, which is identical to the unit found at Cliff Walk’s 40 Steps, was craned into place just off Hillside Avenue.

The new facility represents not just a needed amenity to support existing activities such as the Miantonomi Park Farmers Market, but is also expected to help bring expanded programming to Newport’s largest public park.

City staff are currently completing installation of the utility hookups and an opening is anticipated as soon as next week. A new ADA sidewalk, bike racks and a bottle filler are also in the works to complete the project.

Funding for the double unisex restroom building was secured through a $100,000 Rhode Island Department of Environmental Management Recreation Grant and is the latest in a series of investments the City has made at Miantonomi Park in recent years.

Other recent improvements include the completion of a multipurpose playfield project funded through a 2016 RIDEM Grant, the restoration of an original trail network, and the construction of a new gravel trail linking the park to the Bike Newport Bike Barn with material provided through an ALT Merit grant.

Work is also complete on a Miantonomi Historic Interpretive Plan that will serve as the basis for a new park trail.