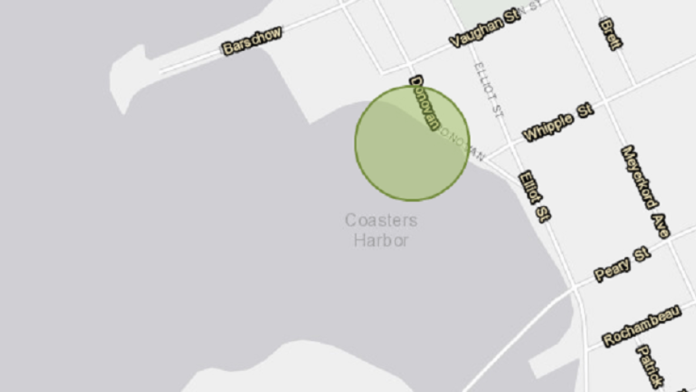 Since notifying DEM of the failure of the force main on Monday morning, Navy staff have used septage haulers and their own vacuum truck to keep the plant’s wet well from overflowing again. A force main is a pipeline connecting wastewater from the discharge side of a pump to a discharge point. Navy staff indicated that repairs of the force main will be completed tomorrow.

Based on the information available, DEM doesn’t expect the overflow to further affect shellfishing in the area; “DEM just heard from Naval Station Newport that they finished repairs at 7:40 PM yesterday, replacing about eight feet of pipe,” Micheal Healy, Chief Public Affairs Officer for DEM told What’sUpNewp on Tuesday morning. “Our calculations are that this spill dissipated quickly within an area of the harbor that is closed to shellfish harvesting and will have minimal environmental impact”.

The sewage overflow site is just east of a large area that already is prohibited to harvesting shellfish because of the Newport wastewater treatment facility’s outfall, activities at the Naval Station, and other potential pollutant sources to Newport Harbor.

“There was an accident with a ruptured sewer line underground on the west side of the Chapel of Hope on Monday morning which triggered immediate clean-up actions by installation personnel, Lisa Rama, NAVSTA Public Affairs Officer, told What’sUpNewp on Tuesday morning.

“It was discovered at approximately 9:30 when water was seen seeping out of the ground in that area.  Prompt action was taken to secure the valves and stop the flow of water through the pipes and vacuum trucks were brought to the location.  Our environmental department was on the scene with Public Works and remained in contact with the RI Department of Environmental Management throughout the incident.  By mid-afternoon the City of Newport had secured their valve to the line eliminating any chance of backflow to the site of the rupture.  By that time, an estimated 10,000 gallons of water had run into the Narragansett Bay.  Repairs were made on the ruptured pipe last evening and there is a contractor on the base cleaning up what residual residue from the spill is still evident, especially after the severe storm last night.  All work in the area will be completed by tomorrow,” Rama continued.

“Naval Station Newport is very sensitive to the health of Narragansett Bay and our teams routinely train to insure we are prepared to do everything we can to keep the water clean”, Rama concluded.

This story is developing and will continue to be updated as more information is received.