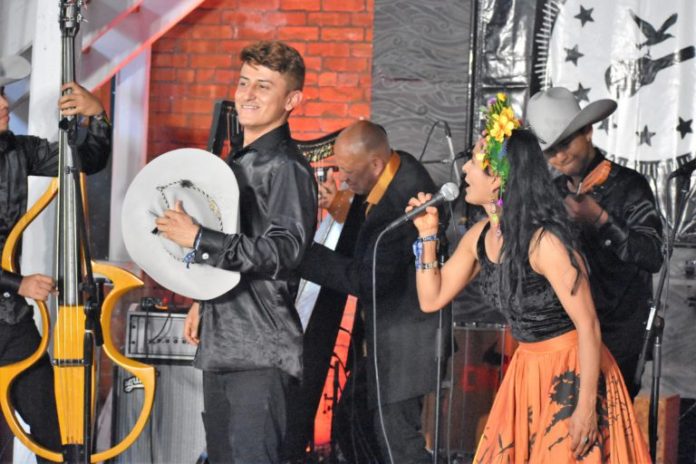 Which band travelled the farthest to the 2019 Newport Folk Festival? The answer would probably be Cimarron, a band that travelled all the way from the plains of Eastern Colombia. We spoke to band Director Carlos Rojas Hernández via e-mail (and google translate) to learn a little more about this unique act.

1. What are the origins of Cimarron? How did the band come together?

Cimarrón began 20 years ago when musicians from the Eastern Plains of Colombia came together with the dream of showing the entire world the traditional music of our land, called Joropo. Our music is made with harp and guitar-like instruments such as cuatro and bandola. We began to explore new sounds in live performances like foot-stomping dance as another percussion component and that woke up the interest of diverse audiences around the world. Since then, we have had the opportunity to tour around 35 countries on five continents.

2. Tell us a little about the music… how is it a mix of traditional and modern?

Our Joropo music is an incredible mixture of sounds from Spanish conquerors, Native American Indigenous, and African ancestors, and that has allowed us to explore traditional and modern in the best possible way. On our new album, called Orinoco, (named for) the river that crosses the Eastern Plains of Colombia, we present to the world for the first time the sound of an old Indigenous deer-skull whistle in a milking-song called “Tonada de la Palomita”, which was made under a concept similar to electronic music production.

3. How have things changed for the band since you’ve gained international attention?

Our first international concert was at the Kennedy Center for the Performing Arts in Washington, a very special place to which we had the opportunity to return on July 23. We have also played at festivals such as Morocco Mawazine Festival, Malaysia Rainforest World Music Festival, Switzerland Paléo Festival, Rajasthan International Folk Festival, Abu Dhabi Culture & Heritage Festival, Førde International Folk Music.

Then we earned our first Grammy nomination for a Colombian traditional music band for Best World Music Album. We also won 2012 Independent Music Awards and again in 2019 with “Zumbajam,” an instrumental song from our new album Orinoco. All this international attention has allowed us to take Joropo to the farthest corners of the world. Singer Ana Veydó and I are the only permanent members of the band, but every year musicians from Orinoco Plains join us from small towns plagued by armed violence. They have an opportunity to show the world how music has touched their lives.

4. How do you feel about playing at the legendary Newport Folk Festival?

When we were invited to play this year at the Newport Folk Festival, we couldn’t believe we were going to be at the oldest festival in America where Bob Dylan and Janis Joplin have been before. We are very grateful for this opportunity to show all the power of Joropo from Eastern Plains of Colombia and this Sunday July 28 we will deliver on stage singing and dancing directly from our land.