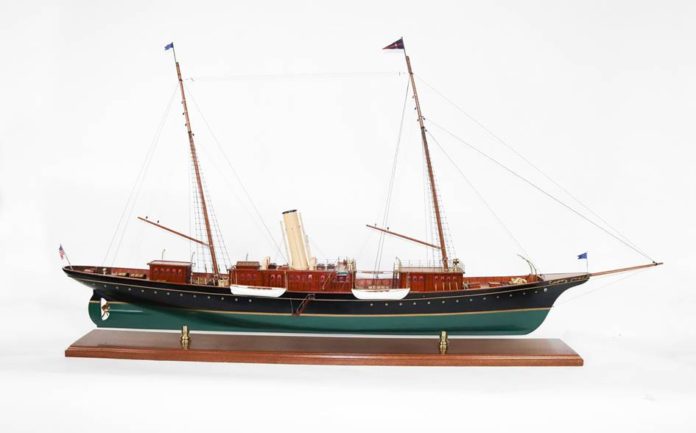 While a number of lots in the sale will be coming directly from IYRS, several important private collections constitute the bulk of items to be sold. These include the former collection of noted maritime author Mark D. Warren, the Sam Taylor and George McMath collections, and items from the collection of the late accomplished wreck diver, Bart Malone. The categories of items in the sale will include Marine Art, rare Artifacts and Ephemera, and fine Ship Models.

Of great interest to many collectors and enthusiasts will undoubtedly be Ella White’s walking stick. A Titanic survivor, Mrs. White made her way during the chaos of that fateful April 15, 1912 evening into a lifeboat carrying her black enameled walking stick complete with an amber-colored bakelite, battery-illuminated crown. Walter Lord, in his landmark book A Night to Remember, wrote “Mrs. J. Stuart (Ella) White didn’t help row No. 8, but she appointed herself a sort of signalman. She had a cane with a built-in electric light, and during most of the night she waved it fiercely about…” Attempting to signal rescue ships, Mrs. White was a star witness in court hearings that followed where newspapers recounted her tale of the illuminated walking stick (cane). It could be argued that Mrs. White’s walking stick is far and away the most significant item ever recovered that had been on the Titanic. Remarkably, that walking stick remained with her family which now, more than a century later, has consigned it to Guernsey’s!

Though the Titanic is clearly the most fabled of all ocean liners (and the sale features several other important items from the Titanic in addition to the walking stick), this auction also features iconic objects from a wide array of other noteworthy ships including the Lusitania, the Normandie, the SS United States, and the ill-fated Andrea Doria. Liner treasures including rare ephemera and artifacts from vessels in the White Star Line to the nuclear-powered Savannah, an Empress of Ireland porthole and the bronze quarter deck bell from the Normandie will be sold without minimum.

What certainly will be one of the highlights of the auction will be the sale of a 23’ 10” meticulously-crated sailboat made by IYRS students to the exacting standards of a Nathaniel Herreshoff design. This is only the third example of this Herreshoff boat, known as Wee Winn, ever built. It was Herreshoff’s creations that led to the building of magnificent yachts that dominated America’s Cup competition from 1893-1920. His smaller crafts, considered by many as the very epitome of yacht design, are treasured family possessions, passed along from one generation to the next. The sleek and beautiful sail boat to be sold was hand-built by IYRS’ most experienced students and staff over the course of a school year. A true nautical treasure, the proceeds from the sale will indeed go, in their entirety, to supporting the education of future boat builders. For the complete history of this beautiful boat, along with photographs of the boat while it was being built at IYRS, please visit www.Guernseys.com.

Although many choose to bid at auction today via the internet (this event will be featured on both LiveAuctioneers.com and Invaluable.com), this Guernsey’s A Century at Sea Auction will be conducted within IYRS’s classic boatbuilding facilities only yards from magnificent Newport Harbor. Indeed, it would be hard to imagine a more appropriate setting for an event such as this. Naturally, when in Newport, one can take advantage of the many sights and activities that make Newport such a compelling summer destination.

For more complete information, please visit www.guernseys.com or call the auction house (212-794-2280) with any questions or to discuss the possibility of a late consignment.