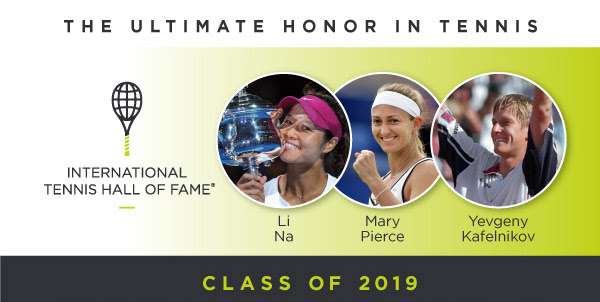 Chinese tennis great Li Na, France’s Mary Pierce, and Yevgeny Kafelnikov of Russia, each a two-time Grand Slam singles champion among their many career accolades, have been elected to receive tennis’ ultimate honor in 2019 – induction into the International Tennis Hall of Fame.

Li Na, China’s first global tennis star, reached the world No. 2 ranking and was a champion at both the French Open and the Australian Open. Pierce is a former world No. 3 in singles and doubles, and four-time major champion, having won a singles title at the Australian Open, singles and doubles titles at Roland-Garros, and a mixed doubles title at Wimbledon. In addition to his two major singles titles, Kafelnikov is a former world No. 1, Olympic Gold Medalist, and the winner of four major doubles titles.

The new inductees will be celebrated on Tuesday, January 24 in a special ceremony in Rod Laver Arena at the Australian Open, joined by many other Hall of Fame tennis legends who will gather to welcome them for the first time as Hall of Fame inductees. The ceremony will take place at approximately 6:40 pm, just ahead of the first evening match.

In becoming Hall of Famers, Li Na, Pierce, and Kafelnikov join an elite group of just over 250 individuals hailing from 23 nations who have received the honor, which recognizes their careers as being among the most accomplished and impactful in the history of tennis. The three are being inducted in the Player Category. This is not a year of eligibility for the Hall of Fame’s other two categories – Contributor and Wheelchair.

“It’s a pleasure to congratulate Li Na, Mary Pierce, and Yevgeny Kafelnikov, and to welcome them into the International Tennis Hall of Fame,” stated Hall of Fame President Stan Smith in an announcement. “They are three incredibly hard-working athletes who set and achieved goals at tennis’ highest levels. This is a well-deserved honor, and we look forward to celebrating them as Hall of Famers in Newport in July.”

Li Na, Pierce, and Kafelnikov will be officially inducted into the International Tennis Hall of Fame on July 20, during Hall of Fame Weekend in Newport, Rhode Island.

New for 2019, ticket packages for Hall of Fame Weekend, inclusive of the Induction Ceremony and other special events, are on sale now on tennisfame.com/enshrinement. Individual Induction Ceremony tickets will go on sale on February 1.