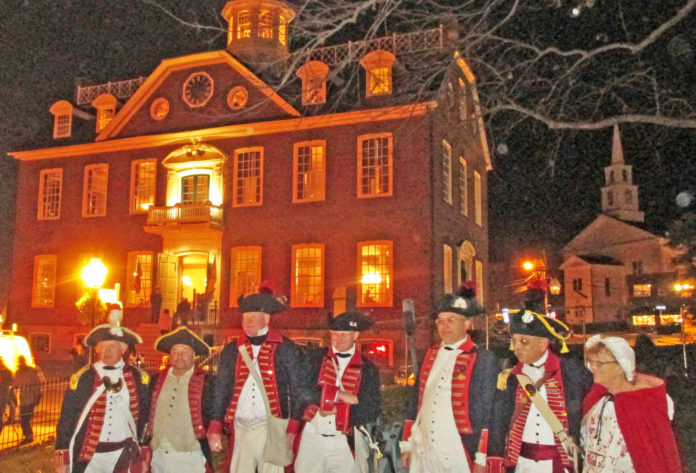 Washington Square was at the heart of colonial-era Newport and this important district was anchored by two structures: the Brick Market and the Old Colony House. These two buildings are both operated by the Newport Historical Society, which has long been the keeper of important artifacts and documents relating to the settlement and growth of Newport since the late seventeenth century. Their work in preserving and making these great colonial buildings available to scholars and the general public alike makes this institution an important partner in the preservation of Newport’s architectural heritage, which is also a critical piece of America’s architectural patrimony.

The Old Colony House represents the civic side of the early Newport community. Designed and built by the former shipwright Richard Munday in 1739, the building displays a mix of Baroque and Georgian influences. The brick structure, with its rustic quoins, proclaims the building’s self-importance and grandeur in a time when the vast majority of Newport buildings were humble wood clapboard. The railing and dormers however give the building a Georgian residential feeling that probably made the Colony house feel right at home with the many Georgian houses that were being built in the area at the time. The broken pediment looks like a grand entrance door that had been elevated high above the Parade which it overlooked. It is from the balcony of this very building that the Declaration of Independence was reportedly read to the assembled crowd below in 1776. This building continued to have a civic function, serving as the part-time home for the Rhode Island legislature for more than 150 years until the grand state house was built in 1901, at the beginning of the twentieth century. Of the several hundred buildings described and photographed in Ron Onorato’s excellent survey of architecture, the AIA Guide to Newport, it is not coincidental that the Colony House is the very first to be listed as it among the oldest and most important existing in the community.

If the Colony House is the “Civic” monument, sitting high on the Square overlooking the common, then the Brick Market sitting at the base of the square represented the commercial side of life in colonial Newport. This sat directly at the end of Long Wharf were the commercial vessels docked. It was to the Brick Market, which was once open at the ground level, to which the goods and produce from far and wide were brought and sold. This building, also made of precious brick to proclaim its importance and permanence, was designed by Peter Harrison in 1772. Peter Harrison is often considered to be among America’s first “architects” in that he designed structures that were then built by others—a novel concept at that time. The building shows a strong awareness of the work of Inigo Jones, an English neo-Palladian architect whose work was documented in books, where his works could influence the designs of people who had never had the opportunity to travel to London or Europe themselves. The sides of the building show the strong influence of the design for the Royal Banqueting House in the development of the building into horizontal layers and in the shapes and arrangement of the windows and dormers. This small building holds a wonderful museum documenting the history of Newport and the ground level still sells goods daily to Newporters and visitors alike, just as it did when it was first built

Since 1971 “Christmas in Newport” has celebrated the holiday in a traditional and lovely way. On December 1, from 3-5pm, the Colony House will be open to the community for a “Holiday Open House” to kick off this annual celebration. In addition to being able to tour this important structure, visitors have the added inducement of being able to join together to begin the start of the advent season and to encourage Newporters to shop locally during the Christmas holiday so that our precious resources stay in the community.  With the continuing improvement of Washington Square (and the buildings which surround it) these two buildings are wonderful destinations during the holiday season and serve as both places to celebrate the city’s great history but also as spaces for Newporters to live, work and shop themselves. Come and celebrate Newport’s rich past while sharing in its hopeful economic future! Come celebrate the season in the place where Newport was first founded.

Ross Sinclair Cann, AIA, LEED AP, is an historian, educator and practicing architect at A4 Architecture who lives and works in Newport, Rhode Island.