The sun had disappeared behind the Rhode Island mainland before the competitors in the 2018 Resolute Cup could finally pack away their spinnakers and head for the dock. Three days of light and shifty breeze has forced the race committee to work overtime to get in races at the Corinthian championship for U.S. yacht clubs. Today that meant starting the day’s seventh and final race after 6 p.m.

With 12 races in the books, and each team having sailed nine, the rankings are starting to crystallize. However, the race for the Resolute Cup, and the berth in the 2019 Rolex New York Yacht Club Invitational Cup, is still wide open. Austin Yacht Club continued to show its class in the lake-like conditions, picking up four top-four finishes today to lead the regatta by 6 points over The San Francisco Yacht Club. Eastern Yacht Club, San Diego Yacht Club and the Storm Trysail Club round out the top five. 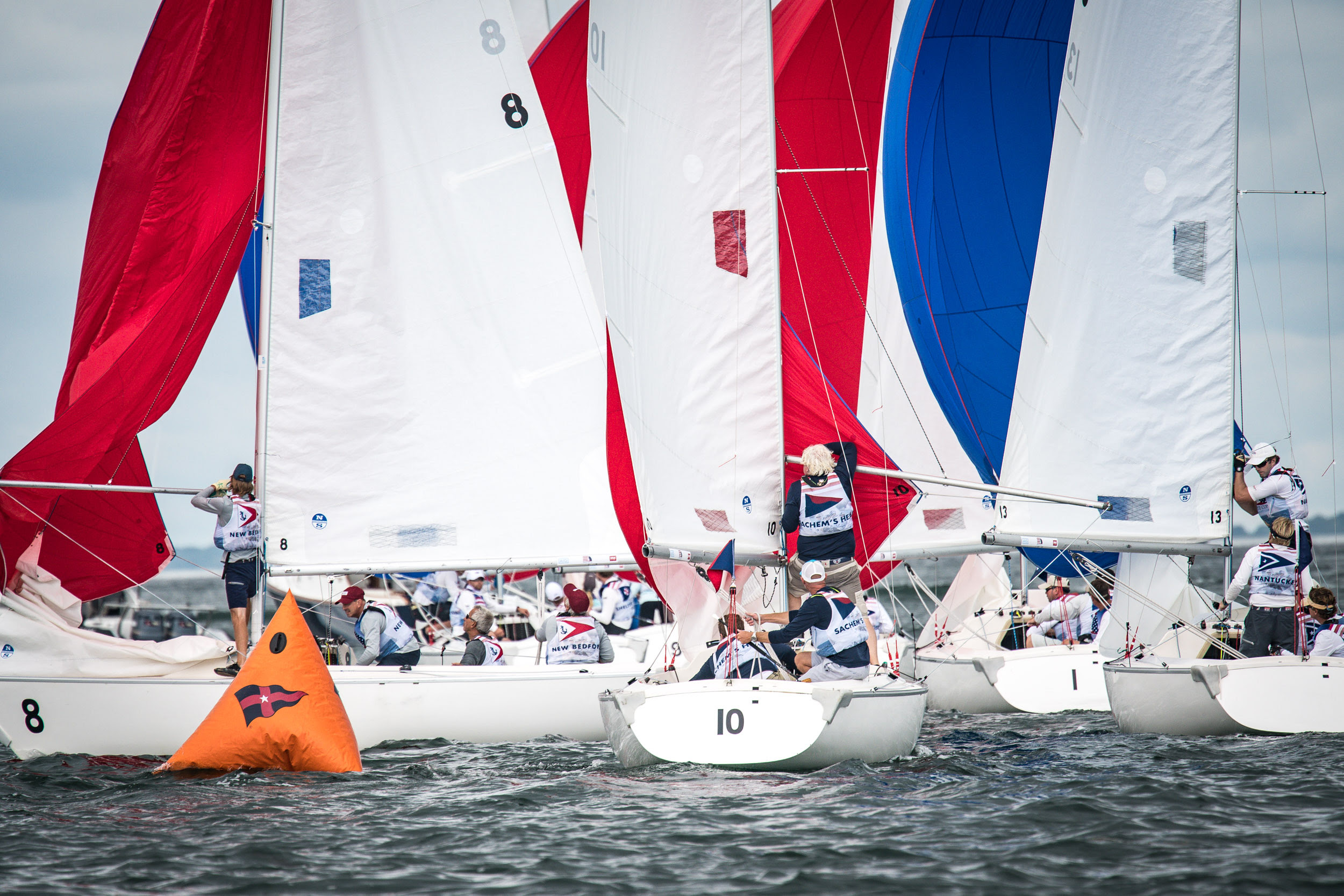 The Resolute Cup was first run in 2010 as the U.S. Qualifying Series for the Rolex New York Yacht Club Invitational Cup. The biennial regatta, which is sailed out of the New York Yacht Club Harbor Court, has since developed an identity of its own as yacht clubs from around the United States send their best amateur sailors to Newport, R.I., to compete for national bragging rights in addition to a potential trip to the Rolex New York Yacht Club Invitational Cup, sailing’s premiere international Corinthian big-boat regatta. The 2018 Resolute Cup will be sailed in the New York Yacht Club’s fleet of 23-foot Sonars. With provided sails, equalized rig tune and a regular boat rotation, it’s a true one-design event. The regatta takes place Sept. 10 to 15 and is sponsored by AIG Private Client Group and Helly Hansen. The final day of the event will be broadcast live via Facebook.

Day 3 of the regatta was all about mental fortitude. The breeze never pushed past 10 knots of windspeed and the strong fall tides kept everyone on their toes as teams tried to string together pockets of wind and maximize any advantage that could be found in the variable tidal flow.

“It was a long day,” says Hannah Lynn, of Eastern Yacht Club, in perhaps the understatement of the regatta considering the first race went off shortly after 10 a.m. and the last race finished at 7 p.m. “With the gaps between the races, it’s hard to keep the focus, to stay in that racing mentality. It was a day to test your patience, and it was more of a test of the toughest mental team. We battled the conditions for a little while. It was hard to stay in it when the breeze got super light and shifty, but you have to shrug those races off and hope the breeze fills for the next one.”

With three strong finishes today, Eastern stands 7 points off the pace set by Scott Young and the team from Austin Yacht Club. But that margin could evaporate in a flash tomorrow. The plan for the final day of the regatta is up to four full-fleet races and then a double-points medal round of up to three races for the top 14 teams.

“The medal races are going to be interesting as there’s going to be a lot more weight placed on them now with us getting in [fewer than expected] opening races,” says Lynn (top photo, at right). “If we end up waiting around in the morning there’s going to have to be some way to get back into it mentally before that racing starts. With a lot of sitting around, it’s hard to get up and go without some kind of routine, something that you can come back to in your boat.”

Lynn is sailing with her father, five-time Resolute Cup skipper Bill Lynn, and is thoroughly enjoying the experience.

“It’s fun,” she says. “I feel like out of all the coaching I had in junior sailing combined, I probably learned more sailing with my dad. I feel like we work really well together.”

And the Lynn duo is far from the only family connection in the Resolute Cup fleet. The Storm Trysail Club team has three brothers, Erik, John and Ian Storck, on the crew. Melissa Purdy Feagin and her brother Tom Purdy are sailing for The San Francisco Yacht Club. Club Nautico de San Juan and Houston Yacht Club also have team members who share a surname. 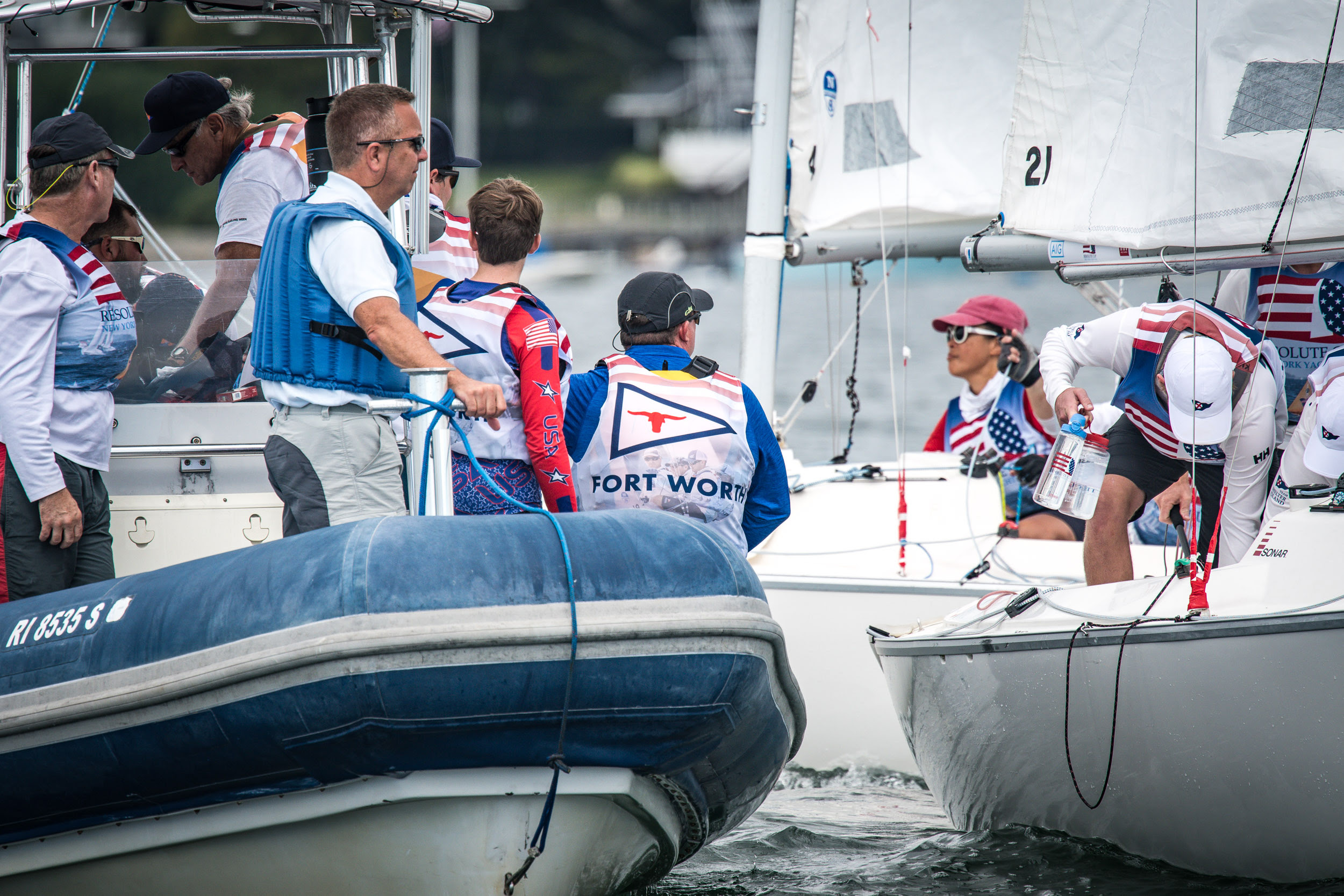 Fort Worth Boat Club (right) is being represented by Marc Nilsson and his son Max, along with skipper Fred Meno IV and Mike Schwinn. The Texas team struggled through the first two days of the regatta, but found something of a rhythm on Day 3, with three top-10 finishes, including a second in Race 10, which the crew was leading until being overtaken by their fellow Texans from Austin Yacht Club on the run to the finish.

“He got me into the sport,” says Max, the youngest competitor in the regatta at 14. “We became members at the Fort Worth Boat Club around 2000 and my mom hooked him up with a sailing class there. The skipper asked him to race with him after the first day [of lessons]. I became a sailor in 2014 in the Optimist. But this is pretty fun.”

Not surprisingly, Marc Nilsson was even more enthused with the experience.

“I love being able to sail with Max in this event,” he says. “This is such a prestigious event, and he’s going to remember this when I’m long gone. It’s really special to have him here with me.”

Competing Clubs in the 2018 Resolute Cup