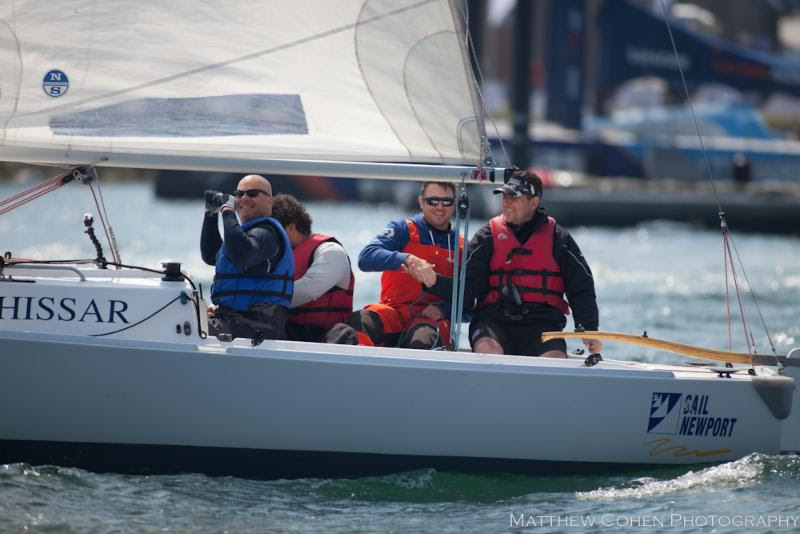 The MetLife Veterans Regatta, a therapeutic event for veterans of active service duty, brought together 12 veterans from around the country for training and racing at the Volvo Ocean Race Newport Stopover on Mondayand Tuesday. Racing in Sail Newport’s fleet of J/22 sailboats, the veterans’ crews also included a representative of race teams Vestas 11th Hour Racing, Team Brunel, Dongfeng Race Team, AkzoNobel and Turn the Tide on Plastic.

Inaugurated during the 2014-’15 Volvo Ocean Race Newport stopover, it is the second time that MetLife and Sail Newport have partnered to host the regatta. Warrior Sailing, a program of the U.S. Merchant Marine Academy Sailing Foundation led by
Ralf Steitz, Corey Kapes and Ben Poucher was also involved in recruiting and training sailors for the event.

“MetLife is proud to work with Sail Newport to bring this exciting event to our veterans’ community,” said Kishore Ponnavolu, president, MetLife Auto & Home. “MetLife has a long legacy of supporting the veterans’ community through various programs and initiatives and we were happy to help make this racing experience truly memorable.”

Nearly all veterans suffer some form of post-traumatic stress disorder which, in the worst cases, can lead to the veteran withdrawing from society. The Warrior Sailing program aims to the veteran that life offers great opportunities despite their injuries.

Team Brunel skipper Bouwe Bekking addressed the veterans before racing and stressed the importance of teamwork. Bekking said that his father fought for the Dutch during the Indonesian National Revolution in the late 1940s and also volunteered during the Korean Conflict. Bekking said that teamwork was as necessary for his father in conflict as it was for him as skipper of a round-the-world racing yacht.

“That part of his life was so important to him, especially his mates and friends,” said Bekking, whose father passed away last fall. “Sailing is based on teamwork. Without the team you can’t perform.”

“You have to stay in shape to a certain degree,” says Steitz, a co-founder of Warrior Sailing. “If you let your body go and you become a slave of your body, that’s a bad thing. The couch is not your friend.”

The Warrior Sailing Program has graduated more than 250 veterans since its first Basic Sailing Program in 2013. Two of them, Dan Brown and Brian Stewart, took part in today’s regatta. The electricity in their eyes and the wide smiles on their faces after a day of challenging Mother Nature and their fellow veterans illustrates how well sailing works as an active sports therapy.

Brown, 33, of Dallas, Texas, was a special ops medic with the 1st Marines Raider Battalion. Three years removed from active duty, he suffers brain trauma from repeated concussions. He had never sailed before joining Warrior Sailing, but now has a goal of completing a trans-oceanic passage.

“I love the water. I love Warrior Sailing,” said Brown. “Due to my concussions I lose my train of thought easily if I’m reading. But with sailing there are so many tactile functions, like grinding winches and pulling lines, that I’m able to focus. It’s great brain exercise.”

Stewart, 36, of Boston, Mass., is a veteran of the Navy who’s been discharged since 2013. He found out about the Warrior program from Corey Kapes, a Certified Therapeutic Recreation Specialist who joined Warrior Sailing after working with the VA. Stewart and Kapes were on a skiing trip when Kapes mentioned that he was transitioning to Warrior Sailing. Stewart had never been sailing before, but he immediately said, “I’ll try that.”

Stewart has found sailing to be exhilarating and likes that he’s expanding his horizons. “I love the water. I like extreme weather. I love it when the boat heels over. I like learning and moving forward. It’s very aspirational.”

Adapting to sailing is easy for the veterans because of the teamwork required for success. The old adage in sailing “you’re only as good as the guy behind you” holds true in combat. It’s that camaraderie that is especially appealing to the veterans.

“This group learns faster than any other group,” says Hugh Freund, a 30-year-old coach of the Warrior Sailing Program. Freund was diagnosed with bone cancer and lost his leg while still a student. He competed in the 2016 Paralympic Games and won a silver medal as crew with
Rick Doerr in the Sonar class.

“The veterans are used to working in small teams,” says Freund. “They are used to problem solving and take accountability for their actions. We go out and practice for one day, come in, discuss what can be done better and the next day they go out and do it. It’s super rewarding.”

Freund and Brown were part of the winning crew along with veteran Nick Trado and Ruben Donne, a project coordinator for the Volvo Ocean Race. There were no losers on the day, however, and with events such as the MetLife Veterans Regatta, group therapy in a sporting contest goes a long way towards healing the men and women who sacrifice their lives for their country.

COMING UP NEXT AT THE VOLVO OCEAN RACE STOPOVER

Daily activities include “Try Sailing!” where an experienced Sail Newport helmsman will take guests of all ages sailing in a J/22.

Highlights of the Race Village include the One Ocean Exploration Zone, presented by
11th Hour Racing. An educational destination offering hands-on opportunities to discover ocean science and the environment, the One Ocean Exploration Zone features an array of exhibits from interactive displays to experiments with micro-organisms, hydrobotics and coastal sustainability designed to fascinate school children to grandparents alike.

The Race Boat Experience features a full-size half hull of a VO65 race boat cut in half. It provides a unique insight to the spartan living conditions aboard a stripped-out race boat and the opportunity for visitors to stand at the helm. The Globe theater will feature 15-minute movies about the Volvo Ocean Race and ocean health.

Aside from the many shoreside activities are four days of sailing on Narragansett Bay by the VO65 and M32 pro sailors. Much of the action will take place in the East Passage, between Fort Adams and Castle Hill. The North Lawn of Fort Adams is a great vantage point for fans and amateur photographers who want to watch professional crews completing tacks, gybes and sail changes. On-the-water action will be accompanied by live commentary through a public address system with simultaneous coverage on the outdoor giant screen.

The Gurney’s Resorts In-Port Race and Leg 9 Start each will be preceded by a Dock Out show beginning at 12:00 p.m. adjacent to where the race boats are when the crews will be introduced and the skippers will address the crowds. Ceremonial fanfare and entertainment will accompany both Dock Out shows on Saturday and Sunday.

The 2017-18 Volvo Ocean Race officially resumes on Sunday with the start of Leg 9, a 3,300-nautical mile passage across the North Atlantic Ocean to Cardiff, Wales. The leg is estimated to last 10 days, and will be a fierce battle as the top two boats are only separated by a few points and the trans-Atlantic leg is worth double points.

Other highlights of the Race Village include: