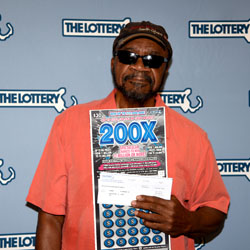 A Middletown man is $650,000 richer after purchasing a lottery ticket in Fall River.

According to Massachusetts State Lottery, Robert Lawrence Jr. of Middletown purchased a “200x” $30 instant game ticket at Sunny Hill Mini Mart in Fall River in June and soon after he discovered he had hit the $1 Million prize.

Lawrence chose the cash option on this prize and received a one-time payment of $650,000 (less tax withholdings).

There are four $15 million prizes and sixty-nine $1 million instant prizes remaining in the “200X” game, which went on sale Tuesday, April 25.