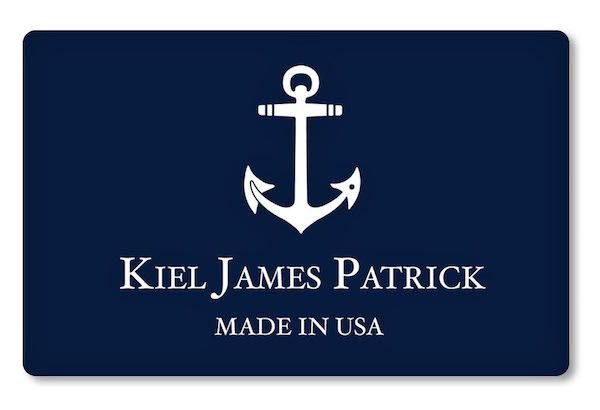 This story was originally published on March 22, 2017.

Well known as “KJP”, the Pawtucket-based lifestyle clothing and accessories company will open their first self-owned and operates store in Newport this May at 5 Bowen’s Wharf. Currently, their products can be found in more than a dozen stores across Rhode Island and more than a hundred across the United States.

The Narragansett moved to a waterfront spot on Bowen’s Wharf that was formerly Destination Chocolate.

With the new storefront, fans of the brand will receive a better glimpse into the world of Kiel James Patrick. “I’m excited to open up our shop in Newport and give customers a look into the brand that they were only able to see through social media and images of our factory in Pawtucket. Customers can expect to see a few familiar faces hanging around the store,” said Kiel Patrick.

The new space will unveil an expanded line of clothing for men and women. “Up until this point, our brand has been best known for the anchor bracelet. With this expansion we’re thrilled to release the next phase of our company. This has been years in the making,” said Jeremy Savage, President of Kiel James Patrick.

Some of the highlights of the flagship store include colorful Victorian style beach cabana dressing rooms, nautical flags on the exterior spelling out Kiel James Patrick, RI, and a brass golden retriever modeled after founders Kiel James Patrick and his wife Sarah Vickers, dog Bennie.

Inspired by the rugged charm of New England, Kiel James Patrick takes pride in creating timeless American-made fashion and accessories, according to their website.

Kiel James Patrick started in 2008 with a single sewing machine and a vision of creating a lifestyle brand that spoke to the classic style of coastal New England. The American-made line, which includes clothing, shoes, bracelets, women’s jewelry, and pet accessories, is sold in over 20 countries worldwide.

Kiel James Patrick is currently seeking a manager for its Flagship Store Director for their new Newport location.