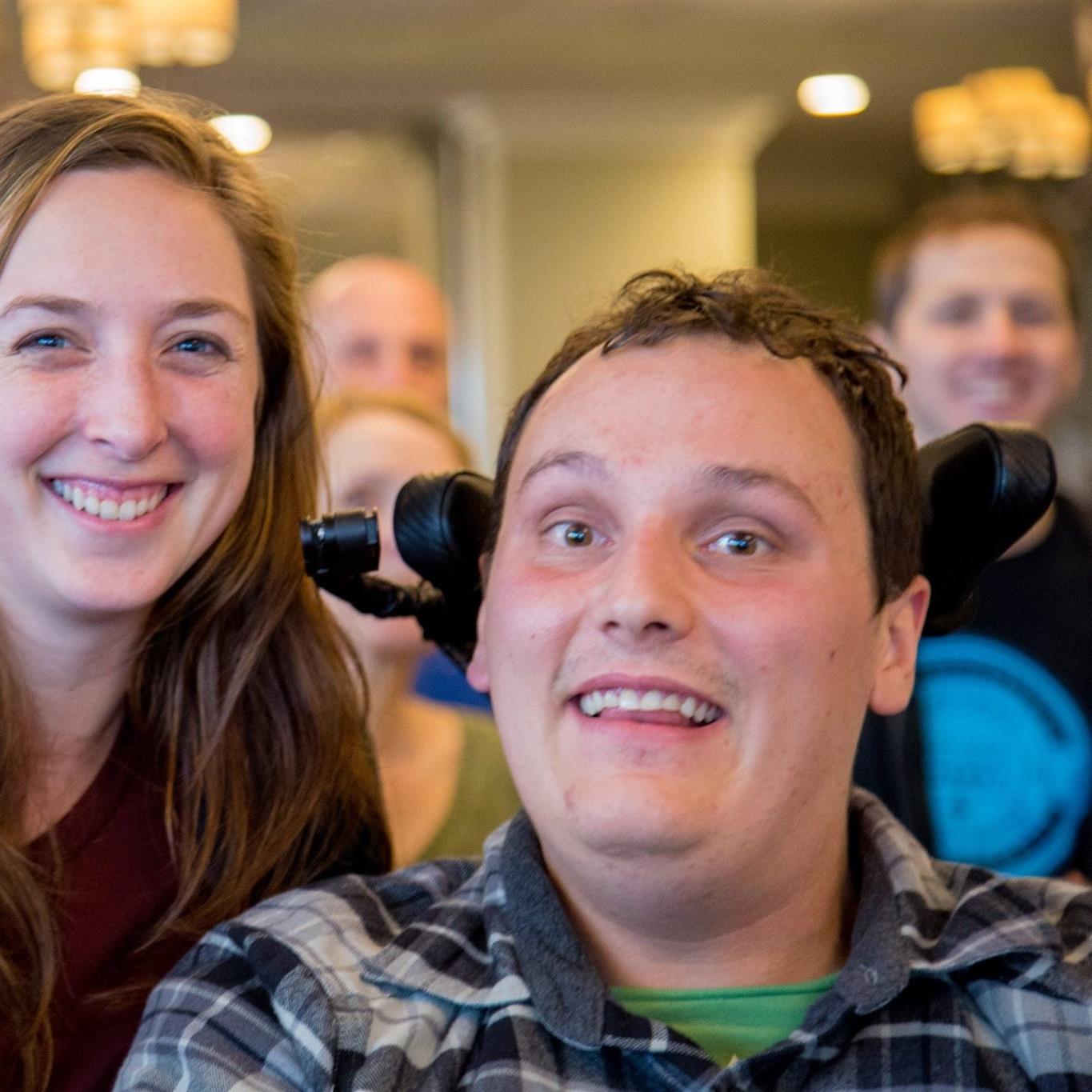 What About Bobby is a column that is written by Bobby Forster, a 27-year-old Newport resident living with ALS.

In case you’re new here and missed the first story in this series, here it is – What About Bobby: What Would You Say If You Were Told That You Would Be Dead In Two to Five Years?

What about Bobby? In his owns words (that he typed using his eyes to communicate with his computer), this is his story….

A thank you to my hero

I would like to introduce you to my hero, she is my best friend and I am so incredibly lucky and honored to call her my wife. Casey and I met the summer of 2013. Funny enough, we actually met online. I had moved back to Newport a few months earlier and wanted to meet someone new. To be honest, I was pretty skeptical about online dating at first, but damn am I happy I did.

We had our first date at Perro Salado and boy did we hit it off. Before we knew it, it was late and they were closing. We just got so caught up in each other. A few months later, I had planned on moving back to New Orleans for the winter as I waited for my new job to start. Anyone who knows me knows that I absolutely hate the winter months. I am just not a fan of cold weather. We had decided we would try to make it work long distance as we really liked one another and it was only going to be for a few months.

Ten days into me living in New Orleans, I had a great realization. What the hell was I thinking? I had just met an incredible lady who I was crazy about. So I packed up all of my stuff back in my truck and I headed back. Casey was thrilled and I could not have been any happier. We really fell head over heels for each other. Everything was going awesome. That next May was when our lives began to change forever.

It started with a twitch. I first noticed a sign of ALS when I had twitching in my right bicep. The first few weeks I didn’t think anything of it. It was a little annoying but that was it. A few weeks later I noticed that my right hand was getting weaker. This is when I started to freak out. What was going on with me? Would I lose the ability to use my right hand? That would be devastating. I was so active. I was young, healthy and exercised regularly. Why on earth was this happening to me?

Over the next few months I saw a lot of doctors and they did a ton of tests. I did MRIs, EKGs, EMGs, spinal taps and blood work, lots and lots of blood work. I was like a pin cushion. With everything that they were testing me for coming back negative, it was becoming increasingly more likely that I had ALS. That is when we had the talk.

Casey came down after work and I thought it would be a good idea to go somewhere and have a serious talk. I drove us out to Ledge Road and walked out onto the rocks. It is a pretty amazing spot right there, especially on a warm summer night. I was terrified going into the talk. I was going to give Casey a way out. It was becoming very likely that I was going to be facing a pretty devastating disease and I didn’t want it to affect her life too. So we sat down and with tears in my eyes I told her that I didn’t expect her to stay and that I fully supported her if she wanted to leave. I was so scared; I really didn’t want to lose her. But I also didn’t want her to go down this path with me because I cared so much for her.

She had already made up her mind though, she was sticking with me. What a brave and amazing woman. I felt such a tremendous sense of relief knowing that I would have her by my side. Suddenly it seemed much more doable. In August was when I got my first diagnosis. I still didn’t believe it or maybe I was in denial. Either way we were still holding out hope. We met with a neurologist at Mass General Hospital just a few weeks later, and again we started the tests. Months later on December 23rd we got some test results back that we couldn’t argue with. We tested my genome and found out that I have a genetic mutation that causes ALS.

This was devastating for a week or two. I was bumming. Then I just got tired of being sad and was able to say F this, I am not going to let this ruin my life. A couple months later, we went down to Mardi Gras where I asked Casey for her hand in marriage while marching in a huge parade surrounded by some of our closest friends. A few months later we were wed and it was absolutely perfect.

We celebrated our one-year anniversary this June and though a lot has changed, our love for one another remains as strong as ever. This woman is literally the strongest person that I have ever met. It is her love and care for me that keeps me going and keeps me motivated to keep pushing. I don’t know if I could stare this disease in the face every day and say fuck you without her by my side. We make an incredible team and there is no doubt with her by my side that I can beat this thing. So Casey from the bottom of my heart I thank you for everything you do for me. I love you with all of my being.

Look for another installment of What About Bobby on What’sUpNewp soon.