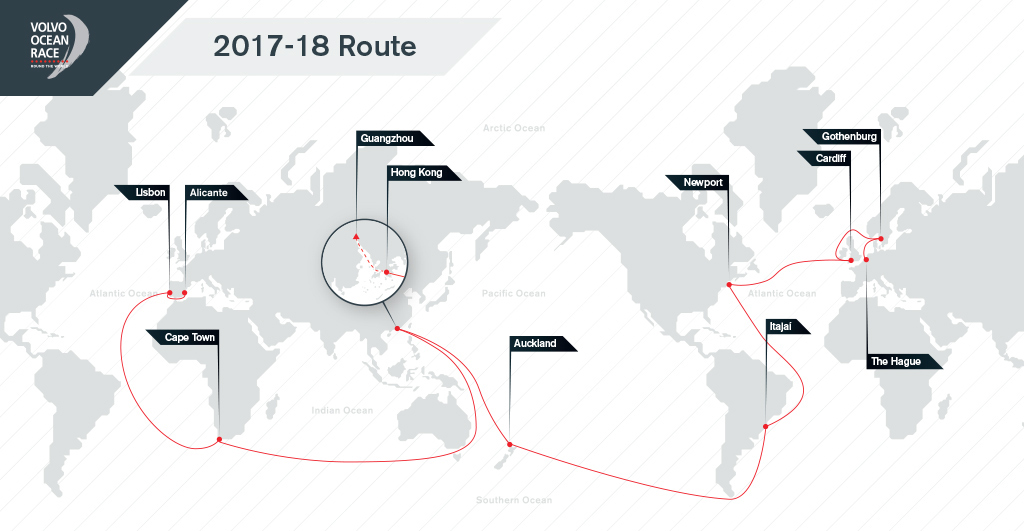 The route the fleet will take for the 13th edition in 2017-18 will, at nearly 45,000 nautical miles, be the longest course ever in the 43-year history of the race.  It will be tough, intense and feature almost three times as much Southern Ocean Sailing as the previous editions.  It will cross four oceans and take in 11 major cities on five continenents. Alicante, Lisbon, Cape Town, Hong Kong, Guangzhou, Auckland,Itajaí, Newport R.I., Cardiff, Gothenburg and The Hague.

The 43-year-old race around the world – the ultimate ocean marathon, pitting the sport’s best sailors, against each other across the world’s toughest oceans – will start from Alicante in late 2017 with a 700nm sprint to Lisbon, Portugal that will provide the first test of the form guide.

From the Portuguese capital, the fleet will plunge south towards Cape Town, South Africa, before an epic few weeks racing through the Southern Ocean and then back north across the equator to Hong Kong SAR, China in what will be one of the longest legs in Race history.

After a non-scoring transition to Guangzhou, China where an in-port race and full set of stopover activities will be held, the ocean racing will resume from Hong Kong to Auckland, New Zealand. The fleet will then head back through the Southern Ocean, around the most famous landmark of them all, Cape Horn, and up through the Atlantic Ocean to the southern Brazilian city of Itajaí.

From there, as in the last edition, the boats will head back in to the northern hemisphere to the Eastern Seaboard of the USA, Newport, Rhode Island, before a blast across the North Atlantic on the blue riband transatlantic leg, which will see them make a first return to British shores in 12 years.

The fleet will arrive in Cardiff, capital city of Wales, in May 2018, before beating its way around the top of the British Isles on a short but potentially brutal leg to the penultimate stopover in Gothenburg, Sweden. The 2017-18 race will end with a grand finale into The Hague, Netherlands.

At nearly 45,000 nm, the total distance of the racetrack is longer than in any of the 12 previous editions of an event which was born as The Whitbread Round the World Race in 1973.

But while the teams will sail more nautical miles than ever before, the race itself is scheduled to be one month shorter than in most of the last 12 editions.

Around 12,500 nm of the race will take place in the Southern Ocean, the fast-moving, ice cold waters around the Antarctic where, unhindered by land, some of the deepest weather depressions circle the bottom of the global, generating giant waves and punishing, heavy winds that can peak at over 70 knots (130 km/h). In the previous edition, the teams spent around 4,500 nm racing in the Southern Ocean.

The Southern Ocean has played an huge role in the history of the Race. In the early years of The Whitbread, the fleet would head as deep into the Southern Ocean as possible, braving the icebergs and ferocious winds of the Roaring Forties and Furious Fifties in order to shave as much distance off the route as they could.

In more recent editions, the boats have raced north through the Indian Ocean, towards the Middle East and have only returned to the south and its more extreme weather for the shorter leg across to Cape Horn.