In what could be the most relevant in Rhode Island’s history, the Rhode Island Presidential Preference Primary will take place on April 26, 2016.

A voter who wishes to vote in the Presidential Preference Primary must have been registered to vote by March 27, 2016.

The Newport Canvassing Authority, which is comprised of three bi-partisan members and two alternates appointed by the City Council, is charged with conducting all elections in the City of Newport. It is the goal of the Authority to ensure the will of the majority of the City’s citizens is accurately voiced in each Municipal, State and General Election; and to serve the City Council and the citizens of Newport by registering as many new voters as possible and encourage all citizens to vote.

Under the direction of the State Board of Elections, and in cooperation with the Secretary of State, the Authority is involved in all phases of the electoral process, from voter registration to tallying the votes after the polls close on election day.

There are approximately 13,985 registered voters in the City of Newport. 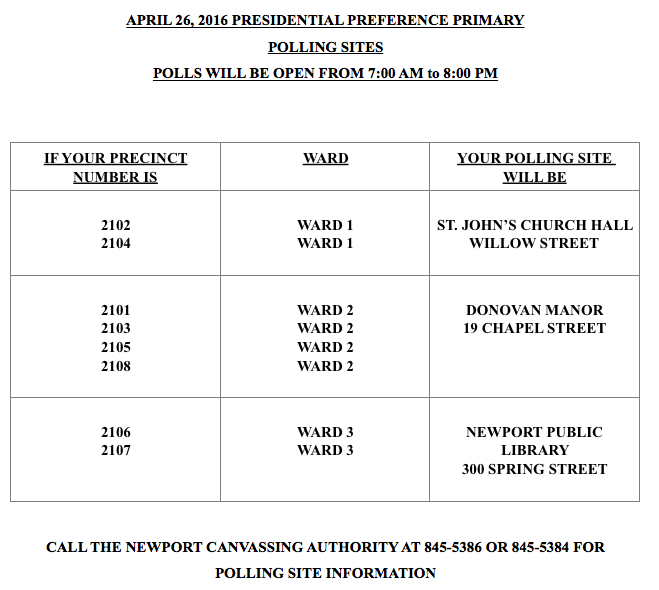 A voter that cannot make it to their polling place on account of circumstances that manifested twenty days or less prior to Election Day can vote by emergency mail ballot between April 6 – April 25, 2016. Contact Newport’s local board of canvassers for more information.