The following items of business, filed with the City Clerk under the Rules of the Council, will come before the Council at its regular meeting to be held on March 23, 2016, at 6:30 p.m in the Cafetorium of the Pell Elementary School.

PLEDGE OF ALLEGIANCE TO THE FLAG

(Speakers must sign in with the City Clerk).  The Citizen’s Forum period shall be no longer than fifteen minutes, and citizens may address the Council on one subject only and for no longer than three minutes. Issues to be discussed shall not include matters to be considered or discussed as part of the regular council agenda and must be related to substantive city business.  No comments regarding personnel or job performance are allowed.

(THE CONSENT CALENDAR IS APPROVED IN ITS ENTIRETY UNLESS THE COUNCIL REMOVES AN ITEM FOR DISCUSSION.  ALL LICENSES ARE GRANTED SUBJECT TO COMPLIANCE WITH ORDINANCES #31-80 AND #98-40.)

Board of Tax Appeals

3.   APPOINTMENTS TO BOARDS AND COMMISSIONS

Note:   Vacancies currently or soon will exist on the following Boards and Commissions:

ADJOURN AS COUNCIL AND CONVENE AS BOARD OF LICENSE COMMISSIONERS

BOARD OF LICENSE COMMISSIONERS

As has been past practice, the Council will meet at 6:20 p.m. to discuss docket items. This pre-meeting will be held at the Pell Elementary School first-floor conference room…  The public is invited to attend.  The docket, along with all supporting documents, can be viewed on the City of Newport website:  www.cityofnewport.com – “Services” – “Council Agendas & Minutes.”  Council Meetings can be viewed on Cox Cable, Channel 18; check local listings for dates and times.  A DVD of the Council Meeting will be available at the Newport Public Library within 48 hours of the meeting.

The Pell Elementary School is accessible and meets ADA requirements.  INDIVIDUALS REQUIRING INTERPRETER OR OTHER ACCOMMODATIONS MUST NOTIFY THE CITY CLERK’S OFFICE (845-5351) OR CITY MANAGER’S OFFICE (845-5429) ONE WEEK IN ADVANCE OF THE MEETING. 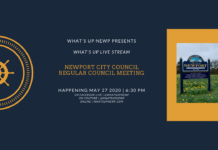