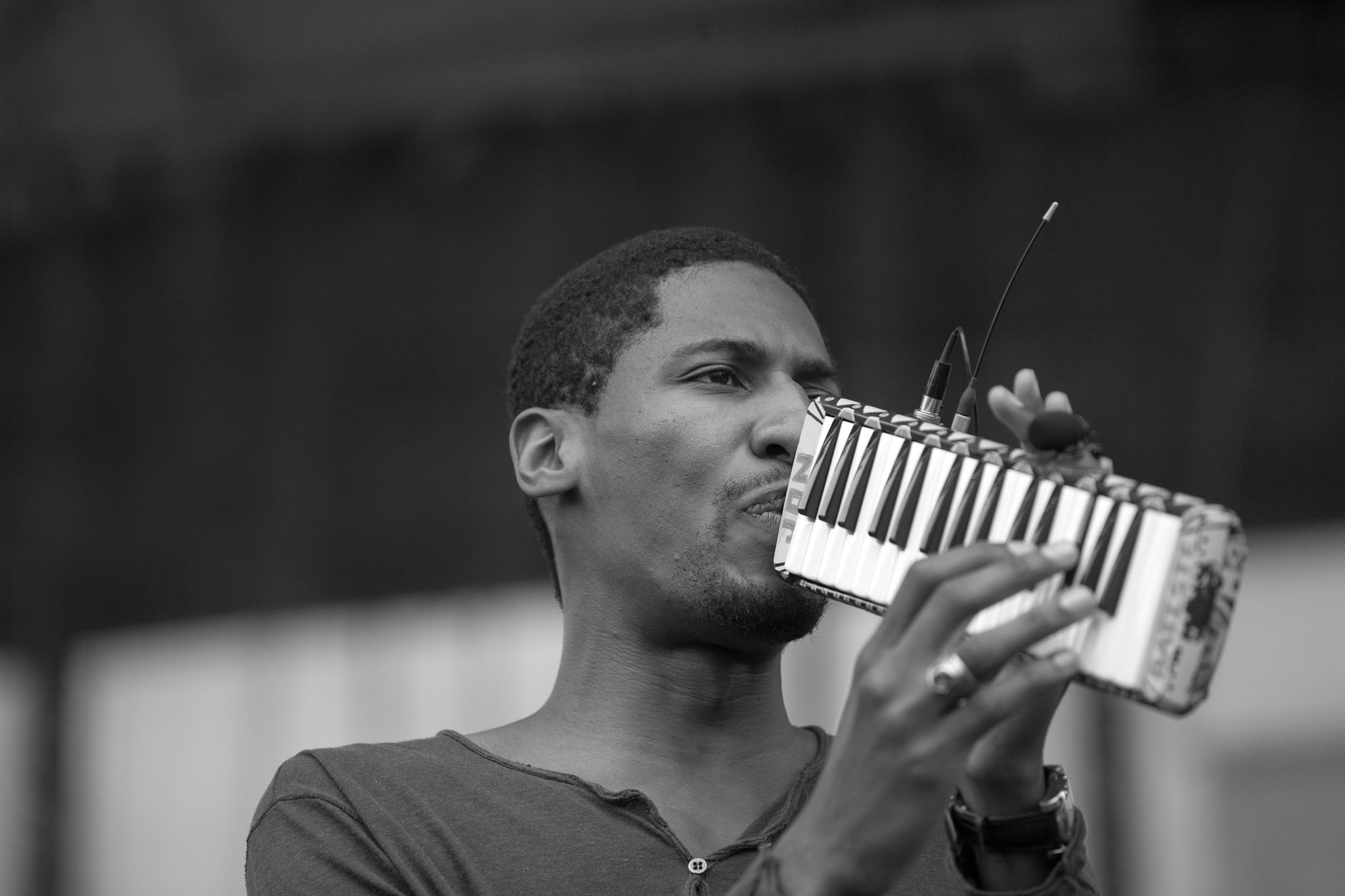 A Newport Jazz Festival favorite, Johnathan Blake returns to Fort Adams State Park with his “chordless quartet”. This explosive group swings, grooves, and explores all different ways to get to the heart of a tune, they will certainly get all those at the Fort Stage on Friday up on their feet and moving!

Fusing the elements of 1970s jazz with today’s blend of and hip hop and pop, Kneebody brings a lot of energy to their debut at Newport.

After an unbelievable show on the Quad Stage of the 2014 Newport Jazz Festival, Snarky Puppy will return to Fort Adams and will take over the Fort Stage. Simply stated, they groove like there’s no tomorrow.

Cécile McLorin Salvant with the Aaron Diehl Trio is something that must be seen on Saturday on the Harbor Stage. Salvant’s presence on stage and beautiful voice is incomparable, enjoy this collaboration with Aaron Diehl Trio.

Jonathan Batiste is certainly a Newport favorite. Coming off of his first Newport Folk Festival, he is the first artists to play both the Newport Folk and Jazz Festival in the same year. The future Late Night with Stephen Colbert Band Leader is an iconic artist, unique in this generation. .

From her first time ever playing Newport, Hiromi has been a crowd favorite. One of the most dynamic and boldest pianists around, it’s only fitting that her trio should make as big a musical statement as she does. With powerhouse fusion bassist Anthony Jackson and Simon Phillips, of Journey fame, on drums, the three are a quintessential Power Trio.

Cassandra Wilson incorporates blues, country and folk music into her work, it will be interesting to see how this talented musician celebrates Billie Holiday.

One of today’s most lauded pianists, Aaron Diehl returns to Newport again in 2015. Aaron Diehl performed at Roger Williams University and the 2014 Newport Jazz Festival, his career is growing fast and this trio is going places!

Few guitarists have as identifiable a tone as Bill Frisell’s Music. Delicate, yet commanding, dulcet, yet unconventional, it is a band in and of itself. With Tony Scherr and Kenny Wollesen rounding out the rhythm section, any type of material is fair game for this trio, from jazz to surf rock.

Although Dr. John and the Night Trippers couldn’t make it to the festival last year, all should be stoked that he will make his return to Fort Adams in 2015. Few artists are as inimitable as Dr. John, so it’s fitting that his new album should pay tribute to another inimitable musician: Louis Armstrong. The Newport Jazz Festival is sure to take on the spirit of the bayou during the good Doctor’s set.

One of the most esteemed electric guitarists of his generation, Mike Stern has distinguished himself over a four-decade career that has encompassed musical partnerships with Blood, Sweat & Tears, Billy Cobham, Miles Davis, Jaco Pastorius, the Brecker Brothers and Joe Henderson, as well as 16 recordings as a leader (six of which were nominated for GRAMMY Awards).

Jamie Cullum brings a Hendrix-like intensity to the piano and returns to the Newport Jazz Festival in 2015. His performance in years past has been nothing short of memorable from first note played.