NEWPORT, R.I. — Naval Undersea Warfare Center (NUWC) Division Newport researchers have been employing different techniques to develop an accurate map of Narragansett Bay’s underwater environment to collect data on how that environment affects sensors and sonar systems and how the area might be used to assist with testing systems used by the U.S. Navy fleet. Understanding what lies beneath the ocean’s surface and identifying any potential hazards or opportunities for adversaries is accomplished through underwater mapping.

One significant aspect of the Narragansett Bay is the eelgrass [Zostera marina] that grows in clumps and forms thick underwater beds with leaves that can grow up to 3 feet long. These eelgrass beds in nearshore waters provide a vital habitat for flounder, bay scallops, and crabs and they also help prevent shoreline flooding and erosion by acting as a wave buffer. In the past few decades, pollution, boat traffic and hurricanes have compromised eelgrass beds but efforts are underway to restore, maintain and expand existing eelgrass areas. Division Newport oceanographers are interested in identifying eelgrass beds throughout the Narragansett Bay testing range not only to protect the beds but to learn more about how they affect readings from sensors and sonar systems.

Division Newport oceanographers Sarah Blackstock and Emily Chandler, from the Ranges, Engineering and Analysis Department, and ocean engineer Frank McNeilly, Corporate Operations Department, recently conducted two different tests in an effort to yield the same results as part of an ongoing effort to characterize the dynamic ocean environment where the Navy tests and operates.

“Our specific focus for this work is submerged aquatic vegetation in Narragansett Bay,” Blackstock said. “The equipment employed in this survey is already owned by NUWC and has been used for UUV detection and classification. For this survey, however, we modified the system to collect information about bottom depth, submerged aquatic vegetation and fish population density. This methodology will enable efficient collection of bathymetric and vegetation data in areas of interest for harbor defense, mine-hunting operations and environmental assessment, allowing optimal sensor layout and greater understanding of the operational environment.”

The goal for this survey was two-fold — to confirm that sonar can in fact serve as an environmental surveying tool and to conduct a detailed environmental survey of the Stillwater Basin area, Division Newport’s waterfront range. This information will be made available to range users to facilitate testing events.

“This time of year, we expect to see eelgrass in shallow-water areas,” Blackstock said. “These eelgrass beds will have started developing early in the summer, and will reach maximum density in August or September. Other species of macroalgae may also be present.

“Eelgrass can be a nuisance for shallow-water acoustic operations because it can produce backscatter and masking effects,” Blackstock said. “The best thing to do is avoid eelgrass beds, which is usually possible since local beds do not grow in depths greater than 15 feet. Survey techniques like this are important because they enable us to map known locations of submerged aquatic vegetation, so that we know where not to put our equipment in the future.”

The sonar team collected their data using a Biosonics split-beam sonar (active at 76 kHz) mounted on the hull of a small boat so that the acoustic beam bounces off the ocean bottom. Based on the acoustic return, the team was able to determine the bottom depth and the height of submerged vegetation as well as see any fish in the water column.

For this survey, the team targeted known locations of eelgrass beds, based on a 2016 survey. At each survey location, they ran survey transects with the system pinging until they had covered the whole area. The sonar’s software helped to interpret the data and generate maps of bathymetry, plant coverage, plant height, etc.

Following the sonar survey, a team of divers conducted a vegetation survey in the same sampling regions in order to duplicate the sonar results. Specifically, they confirmed the vegetation coverage and species.

“The original objective was to develop methods to produce georeferenced video and still images allowing high-definition mapping of areas of special interest,” McNeilly said. “Collaborating with the aquatic vegetation mapping sub-project was a natural fit.

Fathom Resources, a dive services company contracted by NUWC, used a commercial system called Smart Tether that provides GPS coordinates of a diver position. The first stage of testing involved evaluating the accuracy of the Smart Tether system by having divers locate underwater markers along the pier. The diver position data were compared to the surface position of the markers measured with a highly accurate GPS device.

In the second stage, divers were provided a map of two eelgrass beds generated by the Biosonics system: one bed along the west side of Gould Island and one along the shoreline of Coasters Harbor Island. Divers walked the outer perimeter of the bed, stopping to record position waypoints and make eelgrass height measurements. After the perimeter was marked, divers measured eelgrass height in the middle of the beds to provide data to compare with the Biosonics’ vegetation height measurements.

In addition to position and vegetation height, in-water video data was captured as well. A small camera was mounted on the diver’s helmet and recorded GPS data while on surface, as well as pitch/roll/yaw orientation data. The goal was to capture high-definition video and still images that contain georeferencing in the metadata resulting in very accurate underwater position information.

The video and metadata was processed by Laura Sparks, an analyst in Division Newport’s Environmental Branch.

“My part of the project explores the use of Esri’s ArcGIS full motion video add-in in an undersea space,” Sparks said. “Once the video data is georeferenced, the user can watch the video in ArcGIS and create geospatial data either in the video or in the mapping application. For example, if the video captures a section of eelgrass, I can capture that location geospatially and know where it is along the survey line. This will be used to compare to the Biosonic results and ideally to map out features captured in the video.”

Ideally, the next steps would be to employ a wireless system that would provide the same data to support the team’s results.

“We’re hoping to have data from three different systems,” McNeilly said. “If we could go wireless that would free us up to larger areas, take in more data, and collect the data faster. This type of underwater analysis for the Navy is important to mission planning and understanding the performance of technology in different environments.” 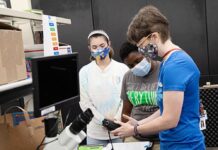