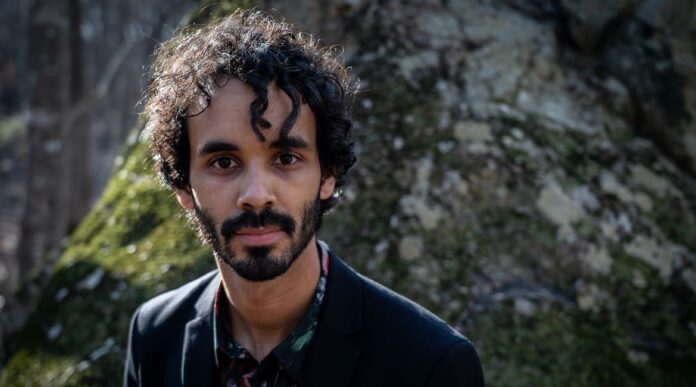 There’s an exciting new voice on the local music scene, an artist who has already achieved critical acclaim. Recent Providence transplant Jake Blount is a Roots/Americana musician who emerged nationally about three years ago.

His new album, Spider Tales, was released last Friday to outstanding reviews and his cover of Leadbelly’s “Where Did You Sleep Last Night” was featured on Rolling Stone Country. The album has been favorably reviewed on popular music sites including No Depression, Folk Radio UK, and The Guardian, who called it “an instant classic, (one that) reinstates folk’s black, queer roots.”

I spoke to Blount last week by phone, while still in lockdown mode, something he certainly didn’t expect when he moved to RI in February. The Washington, DC native explained.

“I reached the conclusion that I was going to leave DC for a number of factors late last year, and went through my list of all the places that I’ve played shows that seemed like they could be good spots. I’ve had the opportunity to see a lot of cities. I wound up landing in Providence, a place where even when it was a house show, it was always packed to the rafters – people filling the room, sitting on the floor, people who didn’t (necessarily) know anything about the type of music I was playing, but were just down to see a cool new thing. You don’t see that very often. Providence is affordable, it’s beautiful and it just seemed like the right call. I knew enough people to not feel totally adrift, but few enough people that I felt like there were no expectations on me being here.”

Spider Tales is a brilliant album that reaches to the core of America and core of your soul. Blount explained that he had a sort of spiritual awakening in high school which led to his interest in American roots music. “I grew up in Washington, DC and I played electric guitar in rock/punk bands. When I was in high school, someone introduced me to modern folk music. That sound kind of resonated with me.”

He continued, “Later on, when Black Lives Matter really started to heat up, and the decision came down that George Zimmerman would not be indicted for the killing of Trayvon Martin, I had a personal crisis… how to deal with this, how have we dealt with this? I didn’t really know what to do, so I went and looked for the music of my ancestors that were enslaved in the Chesapeake Bay region. I went through a bunch of spirituals and eventually found my way to banjo and fiddle music, which it turned out was kind of their thing for a while. I landed there and decided to give it a try and found this awesome community of people.”

Blount is an outspoken activist who has worked to heighten awareness of the LGBTQ+ role in Roots music.

He explained, “I think its exciting to see the embrace of people like me in all different parts of that industry. I’ve had the opportunity to be on the board of this awesome organization called Bluegrass Pride. We’re doing a ton of work to try and provide more visibility and opportunities for LGBTQ artists in the Bluegrass scene and make it clear that other folks are welcome to join… and starting to work more in the old time circles that I run in where being queer has been more accepted for a longer period of time.”

“If you look at the album I’m putting out, the entire band is queer people. We are perfectly gender balanced despite having five people,” joked Blount. It’s a pretty cool thing to look at whats happening and realize that there’s such a change.”

“For me the process of choosing songs for an album is something that happens organically while I’m building my repertoire between releases. I put out my first solo EP about three years ago and in the time since have built it out with my duo partner Tatiana Hargreaves. We developed a bunch of new stuff and wound up playing it on the road opening for Rhiannon Giddens, so we had to develop a lot more material than we had. A lot of that made it onto the CD.

There’s a serious tone to this release, noted Blount.

“Lots of times when you come across activist music or political music particularly in the context of traditional songs, it winds up being about these very happy, uplifting and empowering perspectives, which I think obviously is valuable and has its place, but it hasn’t been what I’ve felt in the past few years. I wound up with album which focuses on the dark part of this canon, these songs are about grief, loss and retribution, zeroing in on that.

Mindful of the current situation, Blount said he has no plans to tour until 2021.  “I moved here in February then I went out on tour for a month, I came back in March and then all this happened. I’m not sure when local gigs get will started again, but people are getting creative. Who knows whats going to happen here – this is a creative city, that’s why I chose moved here. Meanwhile, I’m working on getting my streaming capability to be as good as can be. The Bluegrass Pride activities have moved online – we’re having Porch Pride this year on June 27th and 28th and I’m doing a set for that with my neighbors,  the Vox Hunters.”

We’ll be sure to remind you when Porch Pride happens – meanwhile, look for Jake Blount’s new release on your favorite music service.