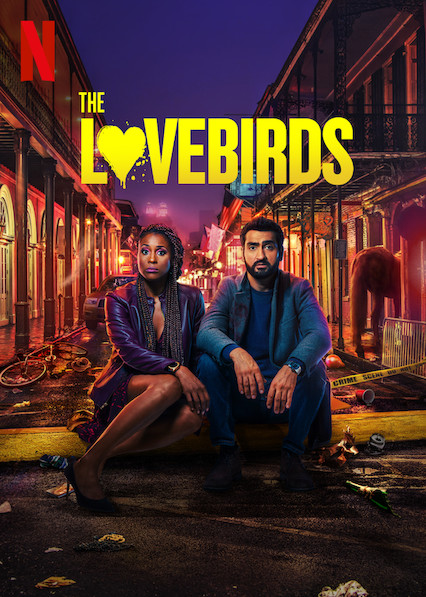 Michael Showalter’s The Lovebirds, which stars Issa Rae and Kumail Nanjiani as a couple on the rocks who find themselves tied up in a criminal conspiracy, was one of the first films to have its release plan blown up by COVID-19. Originally set to premiere at “South by Southwest” and hit theaters in early April, it was instead sold to Netflix and can now be seen from the comfort of your own home.

Whatever hope there might have been that generating festival buzz would lead to a big take at the box office, in this case, I think the pandemic helped this movie find its ideal landing spot— it’s fun and worth seeing, but not exactly for the price of a full ticket. Under normal conditions, I would’ve recommended waiting until it was made available for online rental, but now you don’t have to! Thanks, Corona.

The Lovebirds is what happens when the leads of a romantic comedy are dropped into a crime thriller and decide to solve the mystery themselves. Jibran (Nanjiani) and Leilani (Rae) have been together four years, but after an argument that escalates from trivial to harshly cutting, they decide they’ve reached the end of their relationship. But when a car accident leaves them framed for a murder, they are forced into working together to clear their names, learning more about their true feelings as they stumble deeper into a city-wide conspiracy. While that synopsis might sound somewhat serious, this movie is comedy through-and-through, only using the traditional scenarios of a crime film to explore how funny it would be if the characters involved continuously mishandled them.

Showalter’s film is essentially a showcase for the comedic talents of Nanjiani and Rae, each scene little more than a new backdrop for their bickering, and this reliance on their chemistry is both a strength and a weakness. It’s clear from the first few minutes that both are worthy of the attention, their rapport consistently natural and their rapid-fire, almost improvisational delivery helping a lot of jokes land harder than they would in other hands. The first section of the film is hilarious, entertaining, and momentarily poignant, but as the extent to which the two stars are elevating their material becomes clear, the laughs start to taper off. That Jibran and Leilani don’t ever overstay their welcome, remaining firmly in that coveted inept-but-endearing zone, is a testament to their chemistry.

What’s frustrating is how little the film gives them to work with. The conspiracy plot itself is paper-thin and largely uninteresting, something you only really start to notice when the script devotes some time to answering questions you realize you didn’t really care about. The supporting characters are very hit-or-miss, depending on how they fit into the Nanjiani-Rae dynamic— the antagonist provides neither humor nor menace, for example, and the anticlimax of the final confrontation leaves a bitter aftertaste. Pushing everyone but the two leads far into the periphery pays off in this respect, since the weaker characters rarely get the chance to disrupt the central relationship— but they wouldn’t feel like disruptions in a better film. Luckily for viewers starved for fresh content to get them through this lockdown, Rae and Nanjiani do succeed at carrying The Lovebirds, and it makes for an enjoyable eighty-ish minutes. They just deserved better, is all.