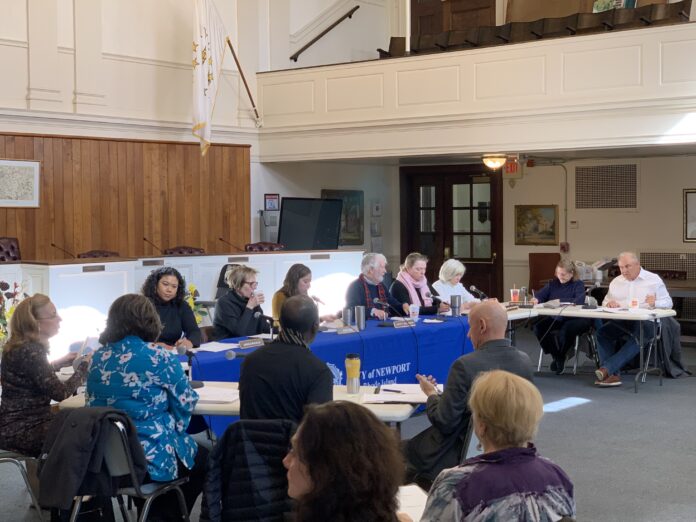 Present for the meeting was all seven members of Newport City Council as well as Representative Carson, Senator Euer, Representative Abney, and Senator DiPalma.

City Council provided the State Legislators with an agenda and several highlights and items that they wanted to discuss and bring attention to.

Infrastructure needs, City challenges, and revenue was certainly on the top of the mind and agenda for the City Council and the City Manager throughout the meeting.

Ryan Belmore from What’s Up Newp was the only member of the media present at the meeting. Here are some highlights and notes from the meeting;

The meeting began with a discussion regarding the Governor’s budget items and impact on municipal government as gleaned from the First Look Senate Fiscal Office Report.

Joe Nicholson, Newport City Manager, shared the following concerns with the First Look document (dated January 21, 2020) with with City Council during their workshop this morning between 9 am – 10 am and with State Legislators between 10 am – 12 pm;

2. Hotel Tax – the Governor is once again proposing to increase the hotel tax by 1% for the purpose of putting that money into the state’s coffers. The City has been trying for several years to get the GA to pass a resolution increasing hotel tax for desperately needed revenue to support City infrastructure and schools. This proposal makes it unlikely that our proposal would ever pass.

3. Collection Fee for Pass-Thru Municipal Revenue – The Division of Taxation will be allowed to deduct a 2% administrative fee for collection the pass-throughout aid of local share of meal and beverage tax and local hotel tax from the municipalities. No municipality including Newport is allowed to collect meals and beverage tax so we can’t avoid the fee. We are the only municipality in the state allowed to collect hotel tax. We don’t think the state should keep any portion of our share of the revenue, but ,in the event his passed ,the City should be allowed to withhold an administrative fee from our collection of the state’s and other share of hotel tax.

4. Affordable Housing Exemption from Transfer Tax – while likely minimal based on the Governor’s estaimate of savings, the City share of the Transfer Tax is 47.8%. We would lose any revenue from transfer of affordable housing.

6. The Governor is proposing to create a commission to study commercial property and tangible taxes at the municipal level. We would want to make sure we are fully represented on any such commission. There would be significant financial impact on the City from an y recommended changes. In conjunction with this is an item on page 49 called the proposed a tangible personal property tax competitive initiative, which would establish a new 5 -year limited state would reimburse municipalities for lost revenue for up to 5 years. I presume the municipality would have to eliminate the revenue source after the time.

7. Permanent Funding Stream – The Governor proposes a new restricted account called the Housing Production Fund, which would be capitalized by an increase in the real estate conveyance tax. Funds would be used to build 250 new housing units and $220,000 to a new municipal housing development partnership initiative focused on improved local capacity. It’s possible this would be disproportionately funded from Newport property transfers and spent in other localities.

Tax Classification and revenue took up a significant portion of the meeting. Among the topic were an amendment to local tax classification law incorporating general provision of existing state law which allow in lieu of a homestead exemptions to provide different tax treatment to residents versus non-residents.

Amend PILOt to include legislatively exempt property along with increase in available funds.

The public had a few minutes at the end of the meeting to address the join workshop, topics ranged from affordable housing to health issues.