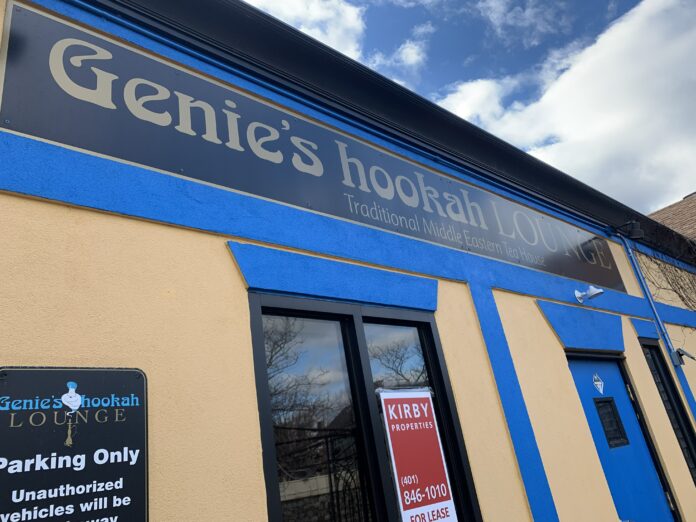 After nearly eight years, Genie’s Hookah Lounge is preparing to close their location at 94 William Street, as their space is now available to lease.

The colorful hookah lounge opened in March 2011 and since has offered flavored tobacco, tea & Middle Eastern/Persian fare. The restaurant has always been BYOB and has often featured a DJ, Belly Dancing, and sports on their television.

The 2,200 SqFt space, which offers access from either from William Street or Memorial Boulevard, is available immediately for lease.

“They are on a ‘month to month’. They were open this past weekend. There is no set closing date, it’s whenever I lease it that they will (permanently) close” Molly Kirby from Kirby Properties told What’s Up Newp on Monday.

What’s Up Newp reached out to Genie’s for comment on Sunday, but has not received a reply at this time.

Correction – There was an error in our original story that stated Genie’s had already closed, Kirby Properties has confirmed Genie’s Hookah Lounge has told them that they will remain open until the property is leased. We apologize for any inconvenience or confusion our error may have caused.

According to the listing from Kirby Properties for 94 Williams Street – Office, Retail or Restaurant Space for Lease;

“2,200 SqFt of, well, you name it- office, retail or restaurant use! Access this space for lease either from William Street, or Memorial Boulevard.Parking for up to four cars on the Memorial side of the building. The kitchen presently in place does not have a hood, however, this one story building with a rubber membrane makes installation a bit more simple. Opportunity to enclose parking/outdoor seating area, similarly to neighbor Sardella’s to add all season seating and extra curb appeal. If the future tenant is interested, the landlord has agreed to install skylights to add some natural light to the space”.

According to Kirby Properties, the property is listed at $4,500 month with 4% Annual rent increases and 3/4 of any future Real Estate Tax increase.