The Jamestown Arts Center has announced the following exhibition opening.

It is common to approach painting as if we, the viewers, are looking into or out of a window in the artist’s mind. For Beyond the Canvas curators Karen Conway and Brooke Erin Goldstein showcase a sampling of contemporary painters who choose to make that window into a doorway. This takes the viewer further into the painter’s world and perspective. Each of the eight artists shown push the boundaries of painting in a variety of ways by playing with genre, subject matter or materials.

Painters Hannah Stahl, Luke Randall and Coral Woodbury use historical and/or cultural references to force the viewer to question their own perspective and relationship to the past and present.  Stahl indicates: “An important aspect of my work involves exposing the deficiency that I feel is inherent in a consumerist culture. As American media and advertisements manipulate our most vulnerable — young people — a painful transition into adult life becomes inevitable. Therefore I’ve been working with the images of children  — or rather children with adult heads — to express a consciousness about this system, paired with a severe inability to revise it.”

Luke Randall’s work often references historical artworks while juxtapositioning them in contemporary setting. Randall states: “My imagery is predominantly representational, but I have recently worked to infuse it with a strong emotional content. Some grows out of a lifelong devotion to music, which has always provided a pathway to realizing my own artistic voice.” Coral Woodbury’s most recent work honors overlooked and under-appreciated women artists throughout art history. Through portraits and large-scale paintings based on recognized masterpieces, Woodbury brings overdue focus to these persevering and pioneering women.

Artists Bob Dilworth and Yann Weiner push materiality in such a way that supports a wider view of the subjects they bring to light.  Bob Dilworth’s Broken Matter provides insight into a complex working process. His current body of paintings is a developing view of his experiences and encounters that define relationships with family, friends and society in an ever-changing postmodern world. The images are staged against a backdrop of the political, cultural, economic, ancestral and racial complexities of our time. Each piece tells a story of perseverance, tradition and generational change as seen through the specter of death, birth, Southern folklore, root work, religious beliefs, fantasy, magic and futurism. Yann Weiner is committed to the idea of material integrity in his artwork, using non-traditional materials to explore themes of memory and decline. Having a strong interest in dynamic and abstracted forms, he often looks towards digital and distressed imagery as a starting point to describe frayed recollections of places and the people who inhabited them.

Arghavan Khosravi, David Barnes and Thomas Crouch highlight politically and socially relevant events and ideas both in and out of context evoking thought and discussion amongst a variety of viewers.  Arghavan Khosravi was raised in Tehran, Iran. Khosravi’s work is deeply connected to her own personal experience of the culture and politics of her homeland of Iran that probe both personal and political experiences by integrating historical motifs with imagery taken from popular culture and contemporary media. David Barnes states: “In recent years I have been trying to create images that reflect the precarious time in which we live, while simultaneously addressing more universal themes of our human life such as transience and beauty. My paintings have become a blend of confrontation and contemplation.” Thomas Crouch’s images depict his interpretation of human migration, with regards to the current paranoia of politically driven subterfuge of information. “This series began in 2016 with the Muslim travel ban. It ends with the current xenophobic indictment of all Central American and Hispanic people immigrating to the United States.”

Visitors of the Jamestown Arts Center will be invited to move through Beyond the Canvas in multiple ways with the works they encounter. The entryway and small gallery will present smaller works from most of the artists allowing one to have intimate encounters with each painter as you arrive. This leads into the main gallery with many large works some of which tower over the viewer and envelope them in each painter’s thoughts. In this way the curators, Conway and Goldstein, lead the viewer through a show within a show creating a meta-ness to the experience intentionally leaving people with more questions than answers.

Works by David Barnes + Hannah Stahl Courtesy of Atelier Newport.
Work by David Barnes Sponsored in part by the Lillian Orlowsky and William Freed Grant and the Provincetown Art Association and Museum.

BEYOND THE CANVAS Exhibition  – At A Glance 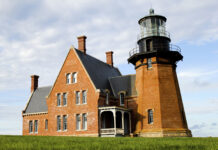 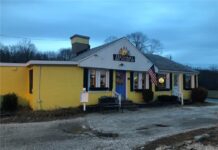