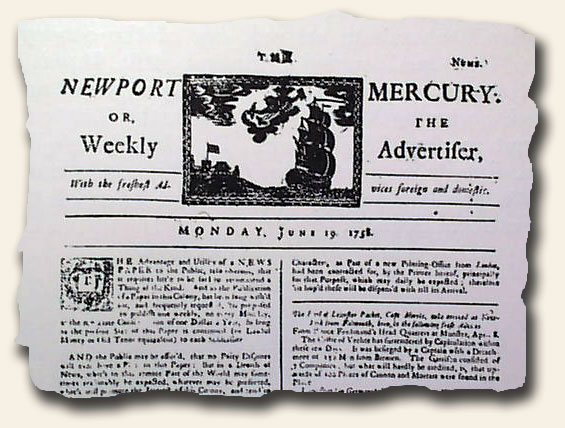 Ann (Smith) Franklin became the sole editor and publisher of the Newport Mercury on August 22nd, 1762, making her the first female editor in the United States.

The Newport Mercury dates back to 1758 and until recently was considered one of the oldest newspapers still operating in the country.

Newport Mercury announced in April 2018  that after publishing as an alternative weekly newspaper since 2005 and as a publication since 1758, that they would cease publication as a weekly paper and would be instead moving forward as a monthly insert in the Newport Daily News. Since then, and without any announcement or reason why, Gatehouse Media has stopped the publication of The Newport Mercury entirely.

The Newport Mercury, The Newport Daily News, Newport Life Magazine and other Edward A. Sherman Publishing publications were purchased by New York-based Gatehouse Media in  October 2017.

Ann, the sister-in-law of Benjamin Franklin, was the country’s first female newspaper editor, the first woman to write an almanac, and the first woman inducted into the University of Rhode Island’s Journalism Hall of Fame.

Her life as described in the Encyclopedia of American Literature, vol. 1, Revised Edition;

“One of the first women printers in the American colonies, Ann Smith Franklin was born in Boston, the daughter of Samuel and Anna Smith. In 1723 she married James Franklin (1697–1735), a printer who had trained in England. The couple had five children.

James Franklin had established his own printing business and newspaper, the New-England Courant, in Boston prior to his marriage. He also had a reputation as a voice for the anti-Puritan opposition. Patterned after Joseph Addison’s (1672–1719) and Richard Steele’s (1672–1729)Spectator, the Courant relentlessly attacked the Puritan hierarchy through one of its principal leaders, Cotton Mather, an influential clergyman. In 1722 Franklin was arrested, censured and jailed for libel. In 1723 the assembly prohibited publication of the Courant without a prior review of its contents. James continued to publish the paper, avoiding censorship by placing it under the temporary control of his half brother and apprentice, Benjamin Franklin.

In 1723 the two brothers had a falling-out. Benjamin left the business and the city for Philadelphia, and from this point forward Ann Franklin filled the role of assistant printer and shopkeeper. The Courant ceased publication in 1726, when the Franklins relocated to Newport, a busy port city in the relatively liberal colony of Rhode Island. They established the first printing press in Rhode Island, publishing the RhodeIsland Almanack, which was also known as Poor Robin’s Almanack (see almanacs). In 1732 the Franklins started a second periodical, the Rhode-Island Gazette, with James as the editor and Ann as assistant printer. It failed within eight months, but the business was sustained by the almanac, government printing contracts, and a bookstore.

James died in 1735 following a lengthy illness. Ann Franklin thereupon assumed full responsibility for the business, which flourished under her management. She quickly issued her first solo publication, A Brief Essay on the Number Seven (1735). In 1736 she became the official printer for the Rhode Island assembly, retaining this lucrative position until her death. From 1736 to 1741 she continued to publish the almanac under the original pseudonym of “Poor Robin.” Beginning in 1738 she wrote most of the material for the almanac herself.

Successful as a printer and businesswoman, Franklin also assumed the responsibilities of a master craftsman, training her two surviving daughters as typesetters and shopkeepers. Her surviving son, James Jr., was dispatched to Philadelphia to apprentice with his uncle, Benjamin Franklin, returning to Newport in 1748 as a partner in his mother’s business. In 1758 Franklin and her son launched the Newport Mercury, the first successful newspaper in Rhode Island. James Jr. served as editor and publisher, and Ann, who was ill and semiretired, wrote some of the copy.

When Franklin’s surviving children died, she was once again forced to assume full responsibility for the business. In partnership with Samuel Hall, Franklin continued to publish the newspaper, making her the fourth female publisher in colonial America. The business was legally dissolved after her death in 1763″.

This story was originally published on August 22, 2015. It has been updated.