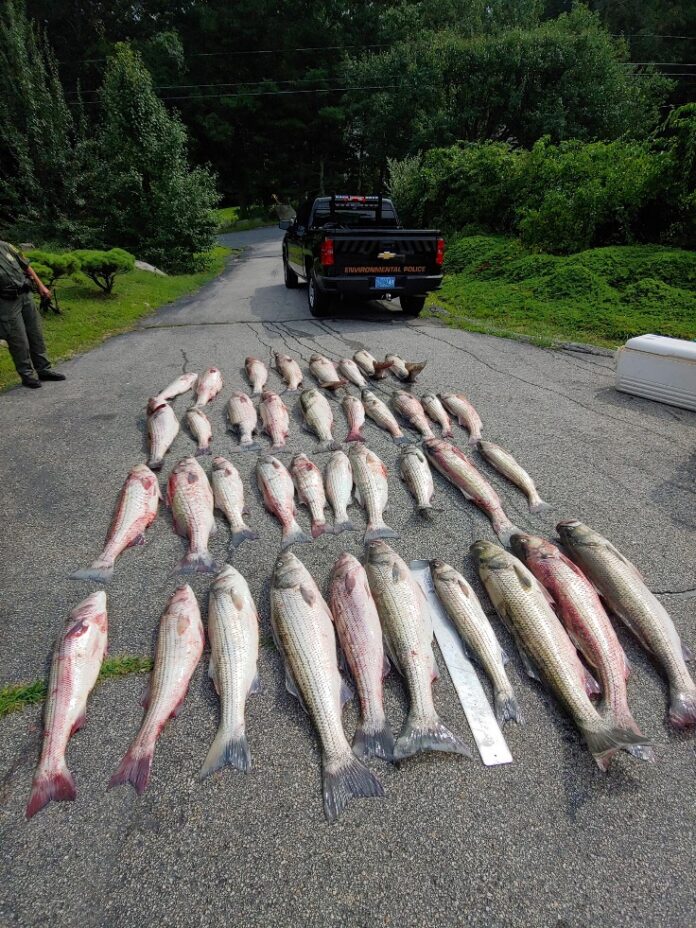 The two men were arrested yesterday by DEM environmental police officers for being in possession of 38 striped bass. Both are Massachusetts commercial fishermen and were charged with 37 counts of exceeding the daily possession limit of one fish per day, and with 38 counts of failure to fin clip striped bass found in their possession as required by law. Majors and Parente are scheduled to be arraigned in 3rd Division District Court in September.  The fish were seized as evidence.

“Preserving Rhode Island’s striped bass fishery and all our marine resources is a responsibility we take very seriously,” said DEM Director Janet Coit.  “I am extremely proud of our DEM Division of Law Enforcement and the commitment and professionalism our officers demonstrate every day in responding to illegal activity and bringing the people responsible to justice.  Their outstanding action to thwart illegal fishing practices level the playing field for all anglers who abide by current striped bass regulations.”

Yesterday’s arrest stemmed from information obtained by DEM officers during Operation Level Playing Field, a recent prolonged high-visibility law enforcement patrol conducted in the Exclusive Economic Zone (EEZ) off the coast of New Shoreham to protect the striped bass stocks. The EEZ is a portion of federal waters reserved for conserving and managing fishery stocks. From July 29 through August 2, officers from DLE, National Oceanic and Atmospheric Administration (NOAA) Office for Law Enforcement, U.S. Coast Guard, Connecticut State Environmental Conservation Police, and NYS Department of Environmental Conservation patrolled and boarded vessels to check for compliance and enforce fishing laws and regulations on the Southwest Ledge off the coast of Block Island, an area frequently exploited by charter boat captains, dive operations, and both commercial and recreational anglers targeting striped bass near the tri-state boundary within the EEZ.

Based on this information, DEM law enforcement officers approached the two fishermen at a residence in West Greenwich and found them to be in possession of 38 striped bass with a total weight of 1,054 pounds.  All of these fish were larger than the 34” minimum size, and none had the right pectoral fin removed as required by regulation.  Both fishermen were in violation of the possession limit of one fish per person, as well as failing to clip the right pectoral fin of a striped bass 34 inches or larger in total length.

Director Coit said that Rhode Island environmental police will continue their efforts to combat illegal fishing activity in both state and federal waters.

For more information about DEM programs and initiatives, visit www.dem.ri.gov