Whether it’s the boom of the double bass, the pulse of the cello or the soulful strains of the guitar, the Newport Jazz Festival presented by Natixis Investment Managers has showcased the best and brightest artists on those instruments, from its inception to this year’s edition.

This year, the legendary bassist/composer/bandleader and NEA Jazz Master Ron Carter comes to Newport on Saturday, August 3, with his drum-less trio, consisting of guitarist Russell Malone, a towering talent in his own right, and the ebullient Nicaraguan pianist, Donald Vega, who took over the keyboard chair from late Mulgrew Miller. Simply put, with over 2,000 recordings as a sideman and leader, Carter is the most recorded jazz bassist in history. If you heard any recording in any idiom, from jazz and pop to Brazilian and hip-hop from the late 50s to today, chances are you’ve heard the supportive, subtle and sinewy bass lines that singer-poet Gil Scott-Heron declared, “glow in the dark.” And for six decades, Mr. Carter has provided aural illumination from the lower frequencies for everybody, from Eric Dolphy, Joe Henderson, McCoy Tyner, Chet Baker, Antonio Carlos Jobim and Herbie Hancock (this year’s Newport Artist-In-Residence), who was Carter’s bandmate in Miles Davis’ Second Great Quintet, to Roy Ayers, Pat Metheny, and A Tribe Called Quest’s hip-hop masterpiece, The Low End Theory.

Carter’s classic recordings as a leader from the 60s, 70s, and 80s, which include his iconic albums, Uptown Conversation, Blues Farm, Pick ‘Em, Etudes and Ron Carter Plays Bach, are as foundational to jazz bass as Chopin’s works are to the piano. From the change of the century to now, Carter’s recording output is the most stylistically diverse it has ever been, as evidenced by the trio dates The Golden Striker, The Golden Striker Trio at San Sebastián, a big band recording, My Personal Songbook and his brand new CD, The Brown Beatnik Tomes – Live at BRIC House, a jazz/spoken word project with visual artist and Tony-winning Def Jam Poetry co-founder Danny Simmons, brother of hip-hop mogul Russell Simmons. As his Newport date will show and prove, the 82 year-old, Ron Carter will also highlight why his sterling bass tones have influenced generations of bassists, including Newport Jazz Festival Artistic Director, Christian McBride, who will play duets with Herbie Hancock, who once remarked to jazz journalist Ted Panken that, ”There’s a reason Ron Carter is still active as he is. He’s playing great all the time.”

The cello is the nearest instrumental relative to the bass, and New York cellist, composer Marika Hughes is one of its leading virtuosos. The granddaughter of master cellist Emanuel Feuermann, and the daughter of parents who owned a jazz club in Manhattan, Hughes played on the TV show Sesame Street, and in The New York Youth Symphony. She’s also worked with an impressive array of artists including David Byrne, Anthony Braxton, D’Angelo and Henry Threadgill, and has appeared on Saturday Night Live, and The Tonight Show Starring Jimmy Fallon.Hughes’ three records as a leader include Afterlife Radio, The Simplest Thing and New York Nostalgia with her group, Bottom Heavy. Hughes comes to Newport on Sunday, August 4, with her newly-formed group, The New String Quartet (NSQ) featuring violinist Charlie Burnham, guitarist Kyle Sanna, and bassist Rashaan Carter. The quartet will be performing  a pleasing potpourri of jazz and classical selections that will stretch musical boundaries.

Throughout the decades, some amazing violinists have graced the Newport stage, from Stephane Grappelli to Regina Carter. California-born Jenny Scheinman is also on that illustrious list. Born in 1973 to folk musicians, Scheinman was a child prodigy who could effortlessly go from bebop to bluegrass with one stroke of her bow. She has built an impressive resume of sidewoman work with Bill Frisell, Norah Jones, Lou Reed, Ani DeFranco, Aretha Franklin, Lucinda Williams and Bono, and has released nine recordings as a leader. Her 2005 release, 12 Songs, was named by the New York Times as one of the Top Ten Recordings of that year.

Scheinman  met the Washington, DC-born drummer Allison Millerin Brooklyn years ago. A master of the trap set, who can swing in a number of grooves from straight-ahead,go-go Latin and all world points in-between, Miller has an equally impressive side woman cred, working with Ani DiFranco, Natalie Merchant, Brandi Carlile and jazz organist Dr. Lonnie Smith, plus eight CDs as a leader, including Boom Tic Boom and Science Fair.

The violinist and drummer have joined forces on their forthcoming CD, Jenny Scheinman & Allison Miller’s Parlour Game, with pianist Carmen Staaf and bassist Tony Scherr.  The name of the band makes reference to the intrigues and ambience and social movements that emerged of turn-of-the century parlor games.  Jenny Scheinman & Allison Miller’s Parlour Gamecomes to the Newport stage on Saturday, August 3, and will play selections from their CD, including everything from straight-ahead rhythms and countrified ballads,to funky back beats driven by Miller’s rock-steady drumming, layered by Scheinman’s Americana-anthemed violin strains that ring from Nashville to Newport.

For tickets and more information on the Newport Jazz Festival presented by Natixis Investment Managers, log on to www.newportjazz.org.​ 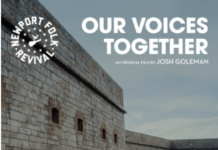 Newport Folk Festival to premiere feature film, ‘Our Voices Together’, as part of Folk On Revival Weekend 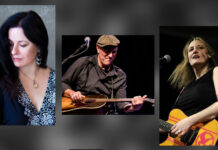 What’s Up This Week in Newport County: July 27 – August 3