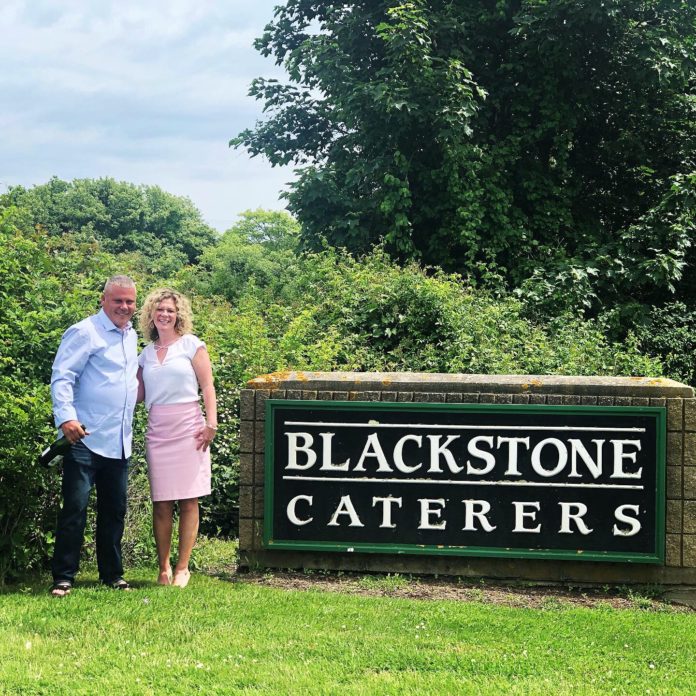 If you’ve been following along closely at all over the last month or so, you’ve noticed that every Wednesday we catch up with our friends at Blackstone Caterers and discuss a wedding topic, tip, or how-to.

Well, today we though we’d pump the breaks for a moment and now that the dust has settled introduce/re-introduce the new ownership team at Blackstone Caterers, which is located in Middletown.

In June, Blackstone Caterers announced they were under new ownership, but the faces are not at all new for their clients or employees.

Blackstone Caterers takes over from here with an intro to Karen & Dave;

Blackstone Caterers has been an established company since 1945 and will continue to be a well-known company with their newest determined owners, Karen & Dave Tungett. With a combined 34 years at Blackstone Caterers, they have shown such a dedication to this industry.

Karen grew up in upstate New York and has always had a passion for the industry. When she was just 15 she was running a café in her hometown. She is a graduate of Johnson & Wales with many years of hospitality experience ranging from Senior Catering Sales Manager at the Rhode Island Convention Center and, prior to that, Catering and Retail Manager at Harvard University. Karen also worked as Assistant Restaurant Manager at the Marriott World Trade Center Hotel in New York. Karen joined the Blackstone team in 2007 as a Sales Manager and received the 2008 “Stars of the Industry Award” for Caterer Employee of the Year from the RI Hospitality Association. She was then promoted to Director of Sales & Marketing along with being the General Manager, before she recently became Co-Owner.

Dave is a native to Aquidneck Island and grew up in Middletown, Dave’s Dad was in the Navy so this was a perfect place for them to settle. Dave’s very first job was at Blackstone Caterers and started his career as a dishwasher and steward. He then became a bartender and worked his way up to Operations Manager and now he is the Co-Owner.  He is a graduate of Johnson and Wales University with a degree in a Bachelors Degree in Hospitality Management. In 2007, Dave met Karen at Blackstone Caterers and it quickly blossomed into a relationship that lead them to the team they are today.

The Tungetts got married in 2011 at the Glen Manor House in Portsmouth, Rhode Island and of course used Blackstone Caterers on their very own wedding day. Since their wedding, they had two beautiful children, Chace & Olivia. On their day off you can see them spending all their free time with their children whether it be in their pool or they are on the ski slopes in the winter. Dave and Karen also love entertaining their family and friends at their home in Portsmouth.

Karen and Dave are very passionate about this company and have been here to watch it prosper into what it is known for today. If you ask them why they bought this company they would say, “because it is part of our family”, which is how they like to not only treat their employees but their clients as well. It is  a dream come true for the Tungetts and they would also say they never could have done this without their amazing friends, family and most of all their Blackstone Team!

For more information or to contact Blackstone Caterers, visit http://www.blackstonecaterers.com/