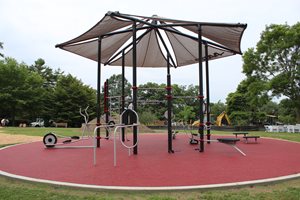 via City of Newport

AARP State Director Kathleen Connell lauded the collaborative efforts of the City and its community partners in bringing the fourth AARP sponsored fitness park to Newport.

“AARP has a long history of working with City of Newport, numerous community partners and hundreds and hundreds of volunteers over the years,” said AARP Rhode Island State Director Kathleen Connell , a Newport native who resides in Middletown. “A reliable synergy has evolved that allows us to get things done and this is just the latest example. AARP, the City and Edward King House teamed up to make the fitness park possible on a very tight timeline of siting, approvals and installation. Our gift to the city was met with nothing but support and gratitude every step of the way.”

“I couldn’t be more pleased to call Newport home to country’s newest FitPark,” added Mayor Jamie Bova. “This was truly a community effort and we owe special thanks to all those involved in bringing this innovative piece of equipment to the city, including our friends at the Edward King House Senior Center, the AARP of Rhode Island and our Public Services staff. Councilor Jeanne Marie Napolitano also deserves a great deal of credit for spearheading the effort on behalf of the council as we work to make Newport an Age Friendly community.”

Over the next several years, AARP plans to sponsor a fitness park in every state, the District of Columbia, Puerto Rico, and the U.S. Virgin Islands.

Newport’s FitLot is the first in the state and was secured entirely through grant funding.

According to Jeanne-Marie Napolitano, bringing sucjh a facility to the residents of Newport has long been a goal for the City.

“We’ve been working to get a piece of physical equipment for adults for years, and I’m amazed with just how quickly this all came together,” Napolitano said.

“This is going to be a great contribution to the city and not only for adults but for all members of the community. I’m looking forward to seeing people out enjoying this incredible piece of equipment. I think it’s the perfect spot and I expect a lot to be happening here.”

“This is not only exciting for our older population but also for everyone in Newport,” added Councilor Lynn Ceglie. “I think this is going to really benefit the entire community.”Attending the opening ceremony were representatives from the City’s Deprartment of Public Services,  Adam Mejerson from FitLot; and Carmella Greer, Executive Director of the Edward King House, along with scores of AARP volunteers and community members.

The next fitness park sponsored by AARP is scheduled to open July 11 in Bangor, Maine, and more than a dozen parks are planned for 2019 in locations across the country.