It couldn’t have been any more exciting on the fifth and final day of the 2019 12 Metre World Championship hosted by Ida Lewis Yacht Club and organized by the International Twelve Metre Association’s (ITMA) Americas Fleet. With Nyala (US-12) having clinched her series early in the Vintage Division after a sweep of yesterday’s two races, it came down to today’s single race to determine World Champions in Grand Prix, Modern and Traditional Divisions. A 12 Metre Spirit Division also sailed, but with no World Championship at stake.Competing in total were 21 historic 12 Metres from six countries – the largest fleet ever gathered in North America.

In the fiercely contested eight-boat Modern Division, the stakes were high today for Challenge XII (KA-10), owned and skippered by Jack LeFort of Jamestown, R.I. Last night the team was disqualified after a protest hearing withCourageous (US-26),sailed by a Newport contingent led by Ralph Isham, Steve Glascock, Alexander Auersperg, Ward Marsh and Art Santry (helmsman). Falling from first overall to second, Challenge XII was tied on point score with third-place Courageous and two points behind Enterprise (US-27), helmed by Clay Deutsch of Newport. Going into today’s race LeFort knew that to win his division, he had to beat Courageous and put a boat between his team andEnterprise. He did that and more, closing out Courageous at the start and going on to win the race with a buffer of three boats on Enterprise. (Enterprise and Courageous wound up second and third, respectively.)

“We were obviously pretty low after getting thrown out last night (for tacking too close to Courageous at a mark),” said LeFort after racing. “We had to get everybody focused to keep doing what we’ve been doing.” With today’s victory, Challenge XII counted five first-place finishes in its nine-race series.

In the Grand Prix Division, where four boats from three countries competed, Denmark’s Legacy (KZ-5), helmed byThomas Andersen with Jesper Bank serving as tactician, took the World Championship title with a one-point lead over New Zealand (KZ-3), owned by Gunther & Maggie Buerman of Newport, R.I. and co-helmed by fellow Newporter Brad Read and Lexi Gahagan of Wilmington, Del. As close as it was, however, Legacy had the series pretty much wrapped today. “We had to be very calm, enjoy the race and not be too hard working,” said Andersen, who counts this as his first time ever sailing a 12 Metre. “Even if we finished fourth we’d still win; we just couldn’t get disqualified or break down.”

Andersen said that Legacy, New Zealand and Kookaburra II (KA-12), owned by Patrizio Bertelli and helmed by Brazil’s Torben Grael, all seemed to be the same speed. “They were very fast, and we were lucky to beat them,” he said. “We could have easily been in third place.”

Columbia (US-16), chartered and helmed by Anthony Chiurco of Princeton, N.J. took the World title in the Traditional Division after winning today’s final race.

Even though she didn’t have to sail today, Italian Patrizio Bertelli’s Vintage Division entrant Nyala took to the racecourse to post her eighth victory in nine races. “We sailed a proper race, fought hard and learned something more in today’s bigger winds (13-16 knots) and waves,” said helmsman Mauro Pelaschier. “It was great training for next week at the New York Yacht Club’s 175th Anniversary Regatta (serving as the 12 Metre Jubilee).

The oldest 12 Metre in the regatta was Onawa (US-6), built in 1928 and sailed by a syndicate led by Jim Blanusha, Steven Gewirz, Louis Girard, Earl McMillen and Mark Watson of Newport, R.I.  She finished second in the Vintage Division.

An awards ceremony, held at the International Yacht Restoration School in downtown Newport, gave sailors one last chance to enjoy each other’s company. Trophies and gifts from sponsors were awarded to top finishers in each class, and the coveted ROAD TO THE WORLDS Waypoints Series trophy was saved for last. The series, which culminated at the Worlds, started three years ago and included 28 regattas sailed in five countries. Based on participation and performance, Courageous accumulated 102 points to finish first, while Challenge XII took second with 99 points andVictory ’83 (K-22) followed in third with 98 points.

This morning before racing, the International Parade of 12 Metres looped through Newport Harbor, giving shore-side fans a close view of the historic fleet and their teams. With battle flags flying and crew members in uniform, the parade finished at Ida Lewis Yacht Club where the cheering crowds were especially appreciative. Each 12 was given a cannon salute as it turned and headed out to the racecourse on Rhode Island Sound. 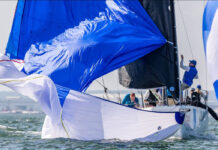 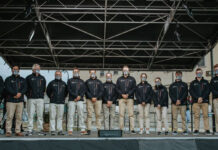 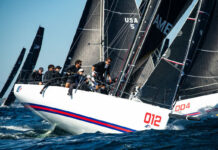 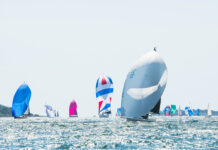 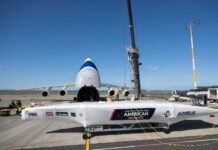