Rating rules have evolved significantly since nine yachts started—from anchor, with all sails except jibs set—a “Trial of Speed” on July 15, 1845, off Elysian Fields in Hoboken, N.J. But one tenet remains the same, the more boats competing under a single rule, the more likely boats are to find themselves enjoying close boat-on-boat competition. With 33 boats competing under IRC and another 34 sailing in the PHRF Spinnaker division, the 165th edition of the New York Yacht Club Annual Regatta will provide just that for a wide variety of boats.

“I think this is great fleet of IRC boats,” says Andrew Weiss (Mamaroneck, N.Y.), who will skipper his Ker 40+ Christopher Dragon in IRC 2 this coming weekend. “It shows that when New York Yacht Club is involved with its quality race committee, owners and crews will show up to race. We think the Annual Regatta is one of the best regattas of the year.”

The 165th Annual Regatta including the Swan American Regatta will run June 14 to 16 out of the New York Yacht Club Harbour Court in Newport, R.I. All classes will enjoy the traditional race around Conanicut Island on Friday, June 14, followed by two days of buoy and navigator racing over the weekend for PHRF, IRC, one-designs and Swans, which will compete under the ORC handicap rule. The social program is always a highlight of this event and includes Friday’s Around the Island Awards Party presented by the 2020 ORC/IRC World Championship, the Annual Regatta Dinner on Saturday (below, left) and another awards party on Sunday for the weekend series. For New England sailors eager to shake off a long winter—and in this case, an inclement spring—the Annual Regatta is always a great way to kick off the Newport sailing season.

The process of gearing up for the season is already well underway for Weiss, who owns the boat with his wife Linda. He and his crew usually shake off the rust in Western Long Island Sound in April and May before turning their attention toward Newport.

“For on our team on Christopher Dragon, this is usually our third or fourth regatta of the year,” he says. “So we hope we are in our groove by this point. For some boats, it’s the first and race of the year. It’s hard to get up to speed with the quality of racing at the Annual Regatta.”

But just like with the stock market, past performance is no guarantee of future success. Weiss and his team are enjoying a strong start to the 2019 campaign, with a second in Larchmont Yacht Club’s Edlu Race and a third at American Yacht Club’s Spring Series, but they will be sure to do their homework this weekend.

“We also have had a lot of consistency with our team over the last 10 years, the same people on tactics and navigation really helps in Newport,” he says. “We get out early and practice on the course. Paying attention to temperature, sun and clouds. Seabreeze is big here and figuring out which side of the course to be on makes huge difference.”

It wasn’t too long ago that catamarans and other multihulls were persona non grata at the Annual Regatta. But that changed a few years ago and the M32 class has added a welcome burst of speed and panache to each edition since. The 32-foot multihulls are deceptively simply, with just two sails, a main and a gennaker deployed from a roller furler for the off-the-wind legs. But teamwork and endurance are crucial to success in this class, which can do five or more short races in a single day.

Six M32 catamarans will take to the water this weekend. Friday’s lap around Conanicut Island is usually a chance for them to display their straight-line speed as they traditionally start last and work through the fleet. On Saturday and Sunday, the M32s will enjoy their own brand of buoy racing, including reaching starts and plentiful passing lanes.

“I’m looking forward to the Annual regatta in the M32,” says Pieter Taselaar (Greenwich, Conn.), who will skipper Bliksem (far right, blue hulls) this weekend. “The North American fleet is gearing up for the Worlds in Lake Garda, Italy, in late August and many of the top competitors will be in Newport to see how they go compared with the fleet and where improvements can be made. The M32 class is stacked with top pro sailors and experienced owner/drivers who have proven their skills in other classes. The racing is expected to be close and exciting, as always in this class. The winner usually isn’t decided until the last race of the last day of racing.”

Among the top professional sailors competing this weekend is America’s Cup veteran and Olympic medalist Chris Draper (Poole, Dorset, U.K.), who will be racing the 165th Annual Regatta in preparation for the SailGP series event in New York City next weekend.

“For us the opportunity to do so many races with a really competitive fleet gives us a great chance to focus on our communication and starting,” says Draper.

While the impressive pedigree of Draper and his crew mates makes them a favorite for the podium in any high-performance class, Draper’s team will be at a slight disadvantage given their collective lack of experience in the M32 class.

“The boats look quite tricky to sail really well,” he adds. “I would imagine it is about making it easy for the tactical decision makers by keeping the boat quick and the handling smooth.” 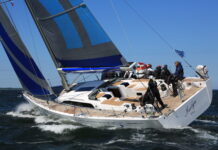