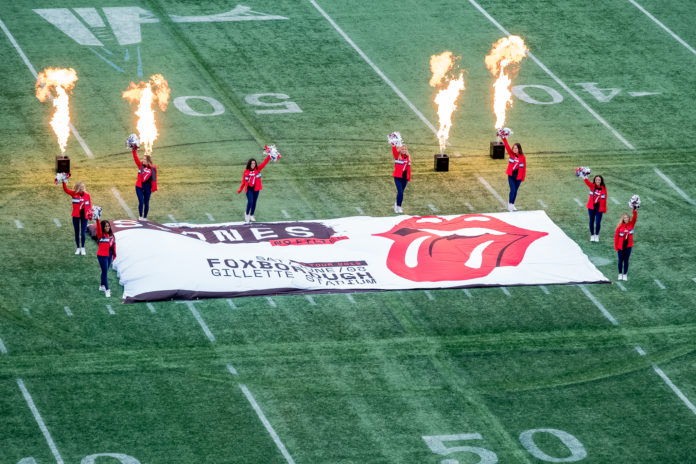 The announcement comes as The Stones bring their hugely successful NO FILTER tour to stadiums in 13 cities across America in 2019 with a stop in Foxborough, Mass. on Saturday, June 8, 2019, at Gillette Stadium.

The tour follows NO FILTER dates this past year that have taken Mick Jagger, Keith Richards, Charlie Watts, and Ronnie Wood back out on the road amassing rave reviews as they played to sold-out stadiums throughout the UK and Europe.

The Rolling Stones NO FILTER setlist has the legendary band treating generations of fans to classic Stones hits such as “Sympathy For The Devil,” “Paint It Black,” “Brown Sugar,”  “Miss You,” as well as special gems from their celebrated catalog.

Kraft and Murphy showed their excitement being selected as only one of 13 stadiums nationwide to host the spectacle. Kraft cited with admiration, his family’s long history with The Stones. NO FILTER will be The Rolling Stones’ third tour at Gillette Stadium. Sixteen years ago, the band became the first concert held at Gillette Stadium, just four months after the venue opened in 2002, and returned in 2006 as part of A BIGGER BANG Tour.

Tickets go on sale Friday, November 30 at 10 AM. For ticketing information visit www.rollingstones.com .

What’sUpRI was there to capture the momentous occasion.