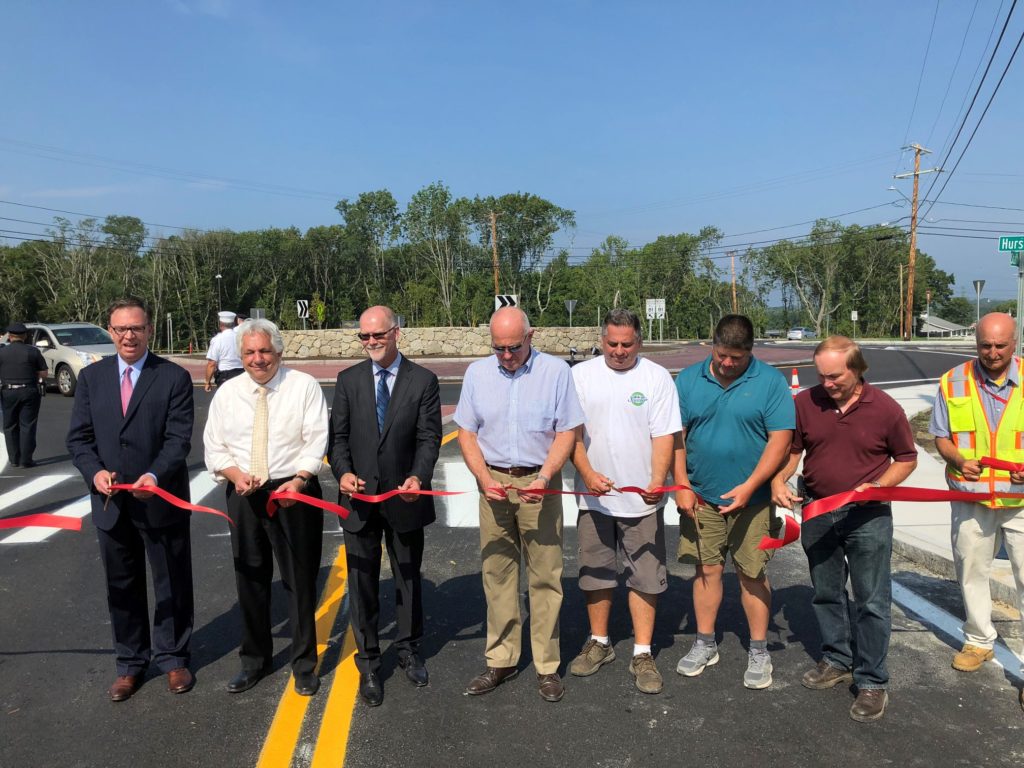 Long-awaited traffic improvements at the intersection of William S. Canning Boulevard and Stafford Road in Tiverton were unveiled today as Rhode Island Department of Transportation (RIDOT) Director Peter Alviti Jr. joined with state and local officials to mark the dedication of a new roundabout there.

The roundabout also serves as the entrance to the new Tiverton Casino Hotel, opening on September 1, 2018. Through a public-private partnership with Twin River, RIDOT provided $1.8 million toward construction of the roundabout.

“This is another example of the new RIDOT working to provide Rhode Islanders with a first-class transportation system by partnering with the private sector to provide significant funding for important safety improvements,” RIDOT Director Alviti said in a press release on Tuesday.

Improvements have long been considered at this intersection, and plans to develop a roundabout were updated to include an entry for the new casino. In 2007 RIDOT approved Twin River’s plans to construct a roundabout in front of its Lincoln casino.

“We learned early on in our conversations with the town that it was important to have a roundabout in place, certainly before the casino opened,” Said John E. Taylor, Jr., executive chairman, Twin River Worldwide Holdings, Inc in a news release on Tuesday. “We made a commitment that we would not open the casino until the roundabout was complete. We are extremely grateful to the RIDOT for working so expeditiously to bring this project to a successful conclusion.”

A roundabout is a one-way, circular intersection built with no traffic signal equipment. Traffic flows around a center island, with those entering the circle yielding to traffic already in the roundabout. Roundabouts are much smaller than old-fashioned rotaries. The smaller size geometrically restricts the speeds of vehicles in the roundabout which improves safety and efficiency.

RIDOT has installed roundabouts at intersections across Rhode Island and has plans to add several more in the coming years. Nationwide, roundabouts have proven to reduce fatalities by 90 percent, and greatly reduce injuries and the severity of crashes. With their lower speeds, these intersections are safer for pedestrians, cyclists, older drivers and novice drivers.