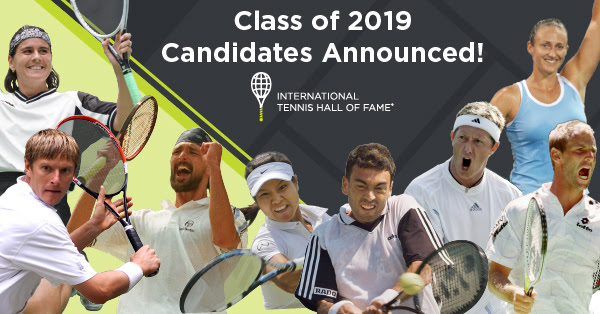 There are three former WTA stars and five former ATP World Tour greats on the ballot for 2019, all nominated in the Player Category. This is not an induction year for the Contributor Category, which honors great contributions to the sports off-court and is featured every four years, next coming up in 2021.

Now that the ballot has been set for the Class of 2019, it will go before an official Voting Group to determine who is elected. New for 2019, the election process will also feature a Fan Vote, in which tennis fans across the globe are encouraged to voice their opinions. Fan Voting will open on Monday, August 27 online at vote.tennisfame.com. Additional details about the voting process are included below.

“This is an exciting year for the International Tennis Hall of Fame election process, with a broad-ranging group of candidates and our first ever Fan Vote. The eight candidates on the ballot come from seven nations and have achieved tremendous results on tennis’ biggest stages – winning Grand Slam titles and Olympic medals, and topping the world rankings,” stated ITHF President Stan Smith, who also serves as Chairman of the Enshrinee Nominating Committee, in a press release on Wednesday. “They’ve also each had massive impact on the sport in their home nations as trailblazers, Olympic and Fed and Davis Cup Champions, first-time Slam winners from their countries, and great ambassadors for tennis. Each has done much for the sport and I hope we’ll see their many fans turn out to vote online to support their Hall of Fame candidacy.”

The candidates are:
- Advertisement -

Li Na, who is credited with creating a surge of interest in the sport in her country, stated “I’m very honored to be nominated for the International Tennis Hall of Fame. Tennis’ history in China is still young, and it’s been a privilege for me to be part of the sport becoming so popular there. I’ve loved to see so many young people get involved and to see more of a presence from China on the tours. To be considered to be in the Hall of Fame alongside some of the best players in tennis history is a great honor for me and my country. I’m very proud and I am grateful for the nomination.”

Located in Newport, Rhode Island, the International Tennis Hall of Fame is a non-profit organization committed to preserving and promoting the history of tennis and celebrating its greatest champions. Since its inception in 1954, the honor of Hall of Fame Induction has been granted to 254 great champions and contributors to the sport from 23 different nations.

For information on the International Tennis Hall of Fame and its programs, visit tennisfame.com.