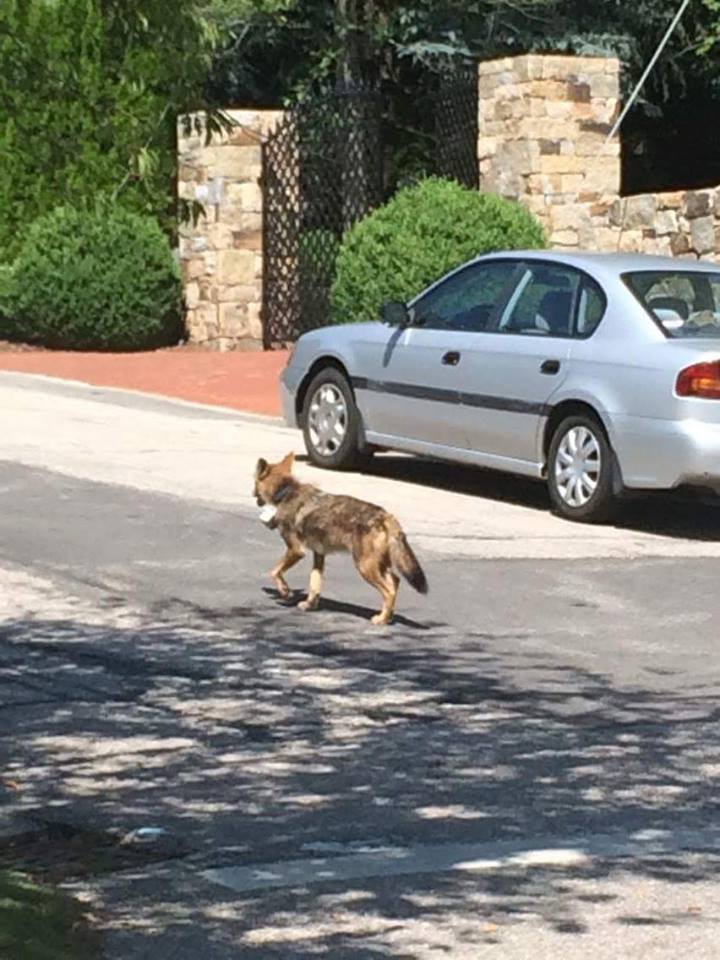 It’s pretty crazy that in this big scary world with all that’s going on in politics and national news that a coyote can drum up so much attention and controversy here on Aquidneck Island.  For those of you not prone to keeping up on local news, a juvenile coyote nicknamed “Cliff” has made himself comfortable here in the Newport/Middletown area and has shown that he is neither fearful or weary of human interaction.

Cliff is a good looking coyote and is monitored with a GPS tracking collar that he sports around his neck.  The Providence Journal’s cover photo for their story about this on-going situation even portrays Cliff as a backyard dog, casually posing in the grass as he lodges down for an afternoon nap.

Deeming the free-roaming coyote as a threat to public well-being, Middletown Police Chief Anthony Pesare and the Town have contracted a hunter to euthanize the animal.  A decision such as this will garner support from concerned residents and anxious parents but will unequivocally receive an overwhelming amount of backlash as well.  A petition, started by Nicole Ingham, has generated close to 24,000 digital signatures with a goal of 25,000 signees.  As an animal lover, Ingham suggests that she started the petition to find an alternative remedy to euthanizing Cliff.

The enormous amount of support caught the attention of Newport City Councilman John Florez, who after speaking with Dr. Numi Mitchell (the director of the Narragansett Bay Coyote Study) has an agreement in place to delay the killing of Cliff.  Councilman Florez has asked for 3-5 days to raise funds to tranquilize and transport the animal to a Massachusetts zoo.  A GoFundMe account has been created to aid in the campaign with the goal of $8,000 as its apex.  Many local residents are applauding Florez for his spring to action and thanking him for trying to secure an alternative remedy.

Now comes the debate.  After spending my morning reading articles on the topic as well as watching grown adults destroy one another in the comment sections of other local publications on Facebook, I figured I’d throw my two cents in the mix.  First, I want to discuss how disgusting people become when they have an opinion that differs from their peers.  I just spent close to a half-hour reading the comments section of another local blog and I couldn’t believe the harsh, vicious and ignorant nature of some of those responses.  This is a no-one-wins situation.  No matter what comes of Cliff, there is always going to be someone who disagrees with the outcome.  We are all entitled to our own opinion and we all have our own fundamental beliefs.  When it comes to the treatment of animals or protection of our families, it seems that passions run most high.  Let’s remember that at the end of the day, we all need to live with our words and treat one another with respect.  It’s fine to voice your opinion but to assault someone behind the comfort of a keyboard is elementary at best.

Hypothetically speaking, if this coyote kills a family pet or hurts a human being during this grace period, how many people will abandon their original stance and suggest that something should have been done sooner?  Take the Harambe case for example.  Last year, a small child fell into a gorilla enclosure at a Cincinnati Zoo.  Harambe, a 17-year-old western lowland gorilla made contact with the child and dragged him a short distance before being fatally shot by a zookeeper.  The incident was captured on camera and received widespread media coverage, so much so that the late gorilla became an international internet sensation.  If Harambe wasn’t killed and hurt the child, people would be calling for the zoo officials’ heads.  Since the gorilla was euthanized, people went into a frenzy over the decision.

I have two regulars who own a home in Newport and visit from New York during the summer who lost a beloved dog to a coyote attack last summer.  The couple was devastated and still have a difficult time when speaking about the incident.  I myself am a proud dog owner and although my Bella can stand her own against other large dogs, she is no match for a wild coyote.  Now I am all for the relocation of this animal, hopefully to a sanctuary rather than a zoo but we need to ask ourselves, is this something that we are going to fundraise each and every time we need to have a dangerous animal removed from Aquidneck Island?  Is it going to take a tragedy for people to change their opinions?  What can we do to prevent incidents like this from happening in the future? How can we educate ourselves on nature, conversation and local wildlife to help better serve their needs and ours?

Cliff was seemingly domesticated.  He felt all too comfortable around humans and consistently made his way down to the dumpsters on Bowen’s Wharf instead of hunting for small game like his peers.  He was humanized to a certain extent by the endearing pictures that were shared via Facebook and other social platforms, making him seem harmless and wholesome.  Had those pictures of Cliff that circulated online depicted him as a insatiable beast who foams at the mouth and snarls at humans taking pictures, I’m sure public opinion would slightly shift.

I commend those who have made an effort to save the life of this animal.  It’s an unfortunate situation to say the least and one that hopefully has a sound ending.  However, no matter where Cliff ends up, someone will find fault or reason to complain.  If he’s killed, people will be calling for animal rights.  If he is relocated to a zoo, people will complain that he’s meant to be in the wild.  If he’s in a sanctuary, people will suggest that he’s lost his natural ability to hunt and will not survive in such circumstances.  A lose lose situation is the only way to describe the plight of Cliff and in this case, no one wins.