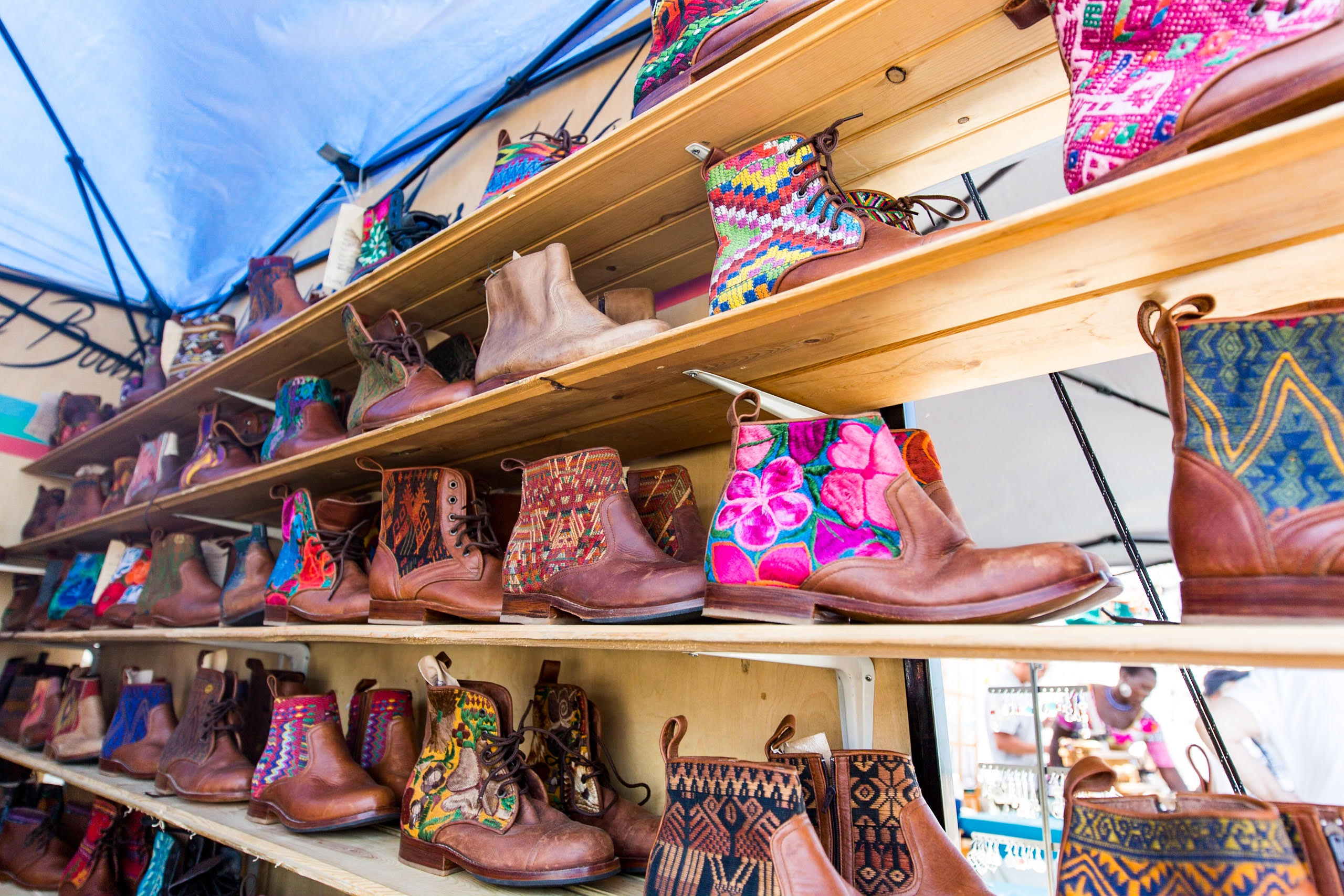 There are always so many intriguing vendors at Newport Folk Festival. You can find anything from hand drawn and embossed stationary to jewelry made of sterling cutlery. What caught my eye most this year was a booth selling crafted boots made from handwoven textiles. The company is called Teysha (Tay-sha), based in Austin, Texas, selling footwear and accessories that are handmade by artisans in Guatemala. These boots are considered wearable art, and Teysha works tirelessly to share the message of the communities who make them.

Representing Teysha at the Newport Folk Festival this year was Kristin Eberts and Danny Vetter. Both Kirstin and Danny travel to festivals all over the United States in order to share their mission and I was able to ask them a few questions. 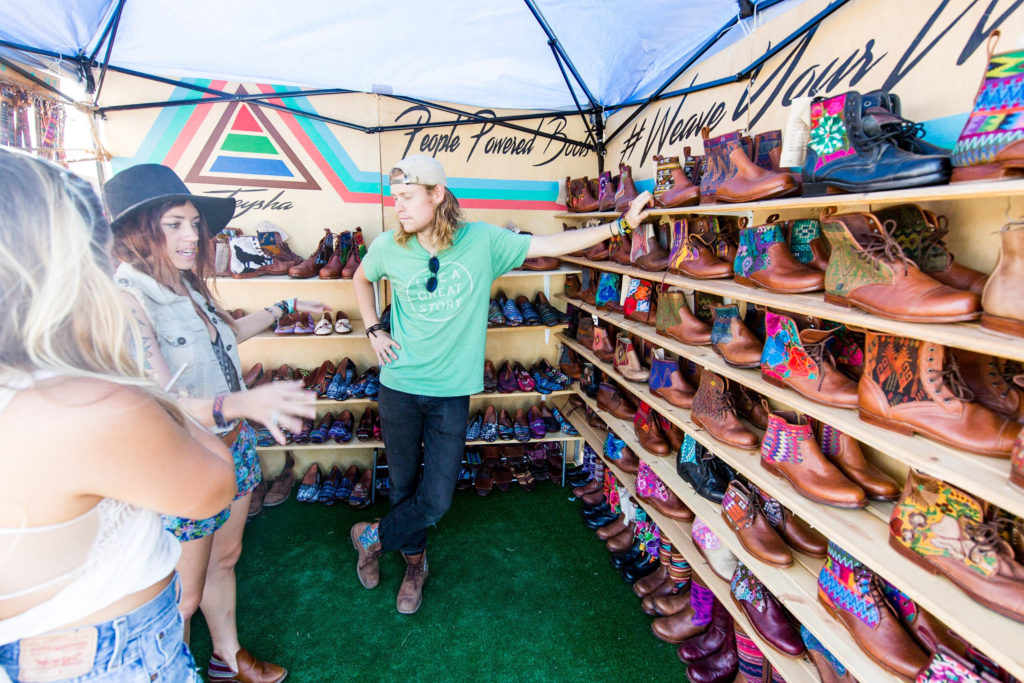 How did you get involved with Teysha?
Danny tells me, “We met serendipitously, studying Spanish, and [I] later lived in Panama as a voluneter. We met the founders of Teysha, who are from Austin, in Panama, they work with different artisan groups and indigenous tribes. These people are traditional weavers, shoe makers, and we focus on Guatemalan artwork and employ Guatemalan shoemakers. We travel around to different festivals sharing their art.”

Have you ever been to Guatemla?
“Yeah, a couple times. It’s an incredible, vibrant place with Mayan magic, ancient. Yet [they produce] super modern pieces.”

All of the textiles featured on Teysha’s boots, slippers, fanny packs, and other goods are hand woven on a loom (back pedal or foot pedal). Their footwear can be customized and comes in all sizes for men and women.

Danny asked Kristin to tell me about the customization process,

“So, they’re all one of a kind. What’s great about these boots is you can change the style, leather color, and then the textiles that you want. You can chose the outside panel, inside panel, we can help you build the boot of your dreams. We are working on an interface that uses virtual reality technology so when you go through this customization process you’ll actually be able to see it all put together for you.”

(As an Westernized American I am imagining a much cooler version of a Nike ID process). 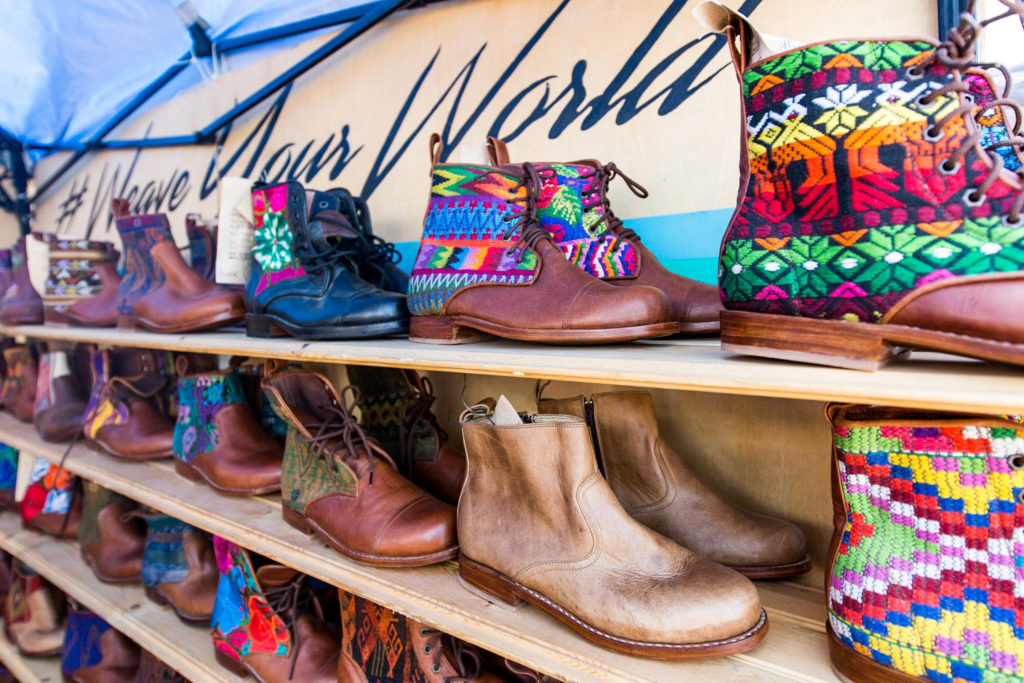 How many employees does the company have?
Kristin tells me, “We are really small right now, it’s a small start up. I think right now there are five of us and we work with web designers and people who help us with social media. We have one employee, Hannah, who is our production manager who is down at the workshop [in Guatemala] full time with her beautiful family. We employ, I think, fifteen shoe makers right now. We also work with over twenty different Mayan communities, there are weavers and embroiderers from each community.”

Is there something you would want people to know about the product that isn’t necessarily obvious?
“I guess that Danny and I are kind of like a bridge right now, we need to communicate this story. Each piece is a work of art. These designs and textiles are ancient from indigenous folk and I just want everyone to know that they are each a story and stories are being told through this artwork and are continuing to be told.”

On average, how long does it take to create a pair of boots? Considering some are made in a variety of different ways and some have more intricate patterns, is there an average time table for completion?
“With a more simple pattern (which isn’t actually simple at all) they would work nine hours a day for nine days that would be six yards of a textile. Seeing the loom process is so extraordinary, I don’t know how to simplify it.”

If you’d like to see footage of the process, it is available on their website. A quick FYI, if and when you do order boots online from Teysha the creation and shipping process takes from six to eight weeks. The process a very well fixed assembly line. Each boot has a tag which will tell you the names of the folks who have cut and stitched the leather as well as who created the textile. Teysha is doing an amazing job at connecting their customers to their product, and Kristin and Danny are warehouses of knowledge.

My last question was,

Totally unrelated to shoes, how does Newport Folk Festival compare to the other festivals you have worked at?
“It was crazy with the wind, we had to build this booth which was pretty wild, but look at the view. The lineup, and the heritage and the history of this place, it feels amazing to participate in something like this. We are blessed to be here.”

Kristin and Danny, wherever you are now, I miss you! Thank you for bringing Teysha (and your vibrant energy) to Newport.