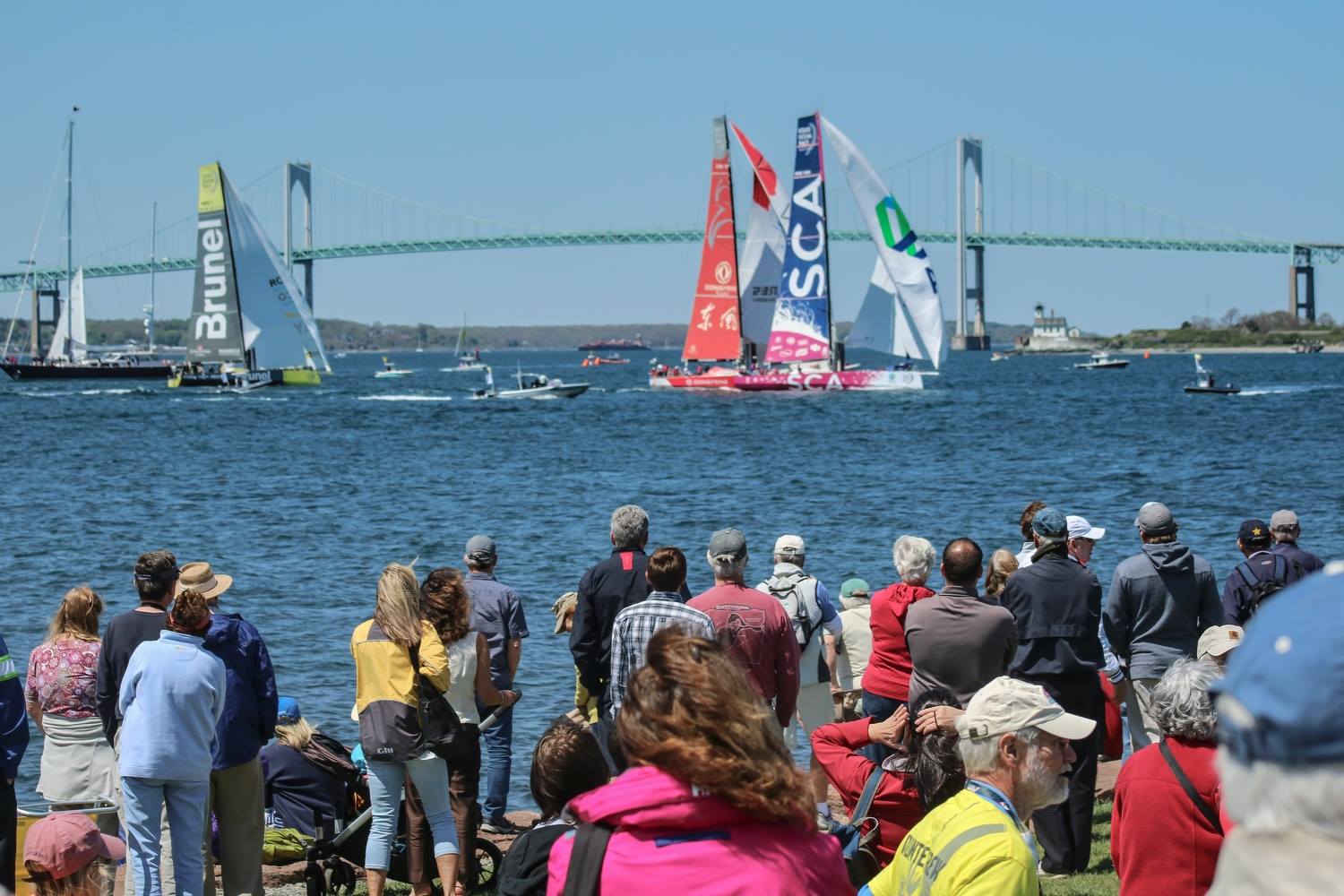 Although it was the next-to-last day of October, there were good vibes reminiscent of last spring swirling around the Rhode Island State House on Friday. And then Governor Gina Raimondo told everyone why.

A photo posted by Volvo Ocean Race Newport (@volvooceanracenewport) on Oct 30, 2015 at 7:24am PDT

Also in attendance were three Rhode Island sailors that took part in the last race: Charlie Enright, who was the youngest skipper in the race, Amory Ross, Enright’s onboard reporter, and Corinna Halloran, an onboard reporter for Team SCA.

Excited @amojr29, @corinnahalloran and @cte02809 from the 2014/2015 edition of the @volvooceanrace could join us today for the #vornewport2018 announcement. A photo posted by Volvo Ocean Race Newport (@volvooceanracenewport) on Oct 30, 2015 at 8:10am PDT

“Rhode Island and Newport is a world class sailing destination,” said Raimondo while looking towards Touber. “We have a robust shipbuilding industry, beautiful bays and waterways and we agree with you that this is the best place in North America for you to be. We couldn’t be more thrilled.”

The Volvo Ocean Race called in Newport last May for the first time in the race’s 42-year history in a public celebration that lasted for 12 glorious days. After a bitterly cold and snowy winter in New England, the race arrived in early May and brought with it splendid weather that coaxed many race fans out from their winter recess and down to the Race Village at Fort Adams State Park.

According to an economic impact report, the stopover attracted more than 131,000 fans to the Ocean State and the City by the Sea. When those watching from boats or other viewing locations are included, the total increases to more than 147,000. The busiest day at the Race Village was during the In-Port Races on May 16, when 21,920 people visited. More than 40 percent of the attendees were from states other than Rhode Island and more than 10 percent were from foreign countries.

The same report concluded that spectators and organizations combined to infuse the Rhode Island economy with $32.2 million by attending and supporting the Volvo Ocean Race. When this initial infusion of money for local businesses was spent and re-spent within the state, the effect led to a total economic impact of $47.7 million.

“It took us 42 years to get to Newport, but we are quick learners and delighted to be coming back,” said Touber.

Touber said that Newport is the seventh stopover for the next race, scheduled 2017-’18. Prior to the past edition race officials signed two-edition deals with starting port Alicante, Spain; Cape Town, South Africa; Auckland, New Zealand; Lisbon, Portugal; Cardiff, Wales; and Gothenburg, Sweden (finish port). Touber said that he expects to announce at least four additional stopovers in the first quarter of 2016.

Newport had received an exclusive negotiating period to secure the stopover a second time, and today Touber explained why. “We had a stunning location at Fort Adams with a brand new pier,” Touber said. “The second thing that stood out was the natural amphitheater. The moment our guests arrived and the sailors stepped ashore they felt the passion, the passion of the people and businesses in Rhode Island giving them such a warm welcome. After such a solid week, many of the sailors didn’t want to go. It was one of the slowest departure ceremonies.”

The Governor’s Chambers filled with loud applause a second time when Read, the executive director of Sail Newport, was introduced.

A photo posted by Volvo Ocean Race Newport (@volvooceanracenewport) on Oct 30, 2015 at 7:40am PDT

“It’s back,” he said simply, before relating a story about how the governor told him to “make sure it comes back.” Read said the stopover created a new legacy that builds upon Rhode Island’s rich history in marine trades and maritime events. “We promoted our exceptional marine industry, exhibited our award-winning sustainable event management practices, and proved that environmental education and stewardship can be hallmarks of major marine events,” said Read. “All of these accomplishments were shown in the brightest light on the biggest stage that our sport has to offer.”

To build on the success of the past stopover DEM Director Coit hopes that the next one will have more evening entertainment. She also hopes that it can incorporate Providence, South County and other areas of Rhode Island. “It would be nice to see more of Rhode Island partake and enjoy in the race’s visit,” said Coit.

“It’s back, it’s back!” Brad Read, Executive Director of @sailnewportsailingcenter #vornewport2018 A photo posted by Volvo Ocean Race Newport (@volvooceanracenewport) on Oct 30, 2015 at 7:40am PDT