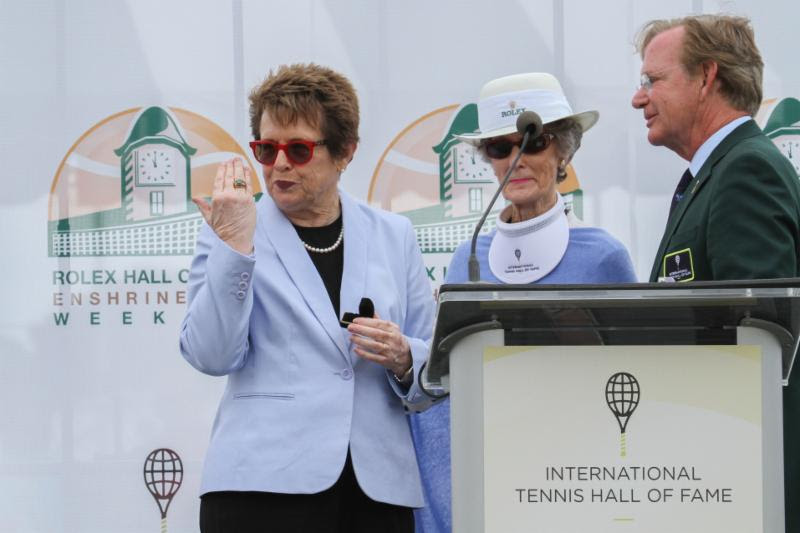 Billie Jean King, ITHF Secretary Peggy Woolard, ITHF Chairman Christopher Clouser.
All photos by Kate Whitney Lucey.
Tennis legend Billie Jean King was among the honored guests at today’s International Tennis Hall of Fame Induction Ceremony, during which she was presented with her official Hall of Fame ring. King, a 39-time Grand Slam champion and former world No. 1, was inducted into the Hall of Fame in 1987.
The Hall of Fame rings are one-of-a-kind pieces that are being presented to Hall of Famers at tennis events around the world that are of particular significance to the individual, to commemorate their recognition as being among the sport’s greatest champions. The rings bear a green stone set in gold and each one is etched with the Hall of Famer’s name.
The ring was presented by International Tennis Hall of Fame Chairman Christopher Clouser and Peggy Woolard, who serves as Secretary of the Hall of Fame’s Board and has been a longtime supporter of the sport in many ways. King’s former doubles and mixed doubles partners, Hall of Famers Rosie Casals and Owen Davidson, participated in the ceremony. Each recounted personal reflections of King’s impact on the game and persona as a friend and playing partner.

Casals paid tribute to her friend, saying, “We shared times together on and off the court fighting for equal prize money and recognition for women’s tennis, establishing the Virginia Slims tour and the Women’s Tennis Association in 1973. We were in our prime and they were exciting times to share with you, but most importantly I’m happy we were able to share a special friendship that has remained constant and has endured the passing of time. Those who have come to know you value that friendship as I do. You have made a difference in the lives you’ve touched and the things you’ve done. I am one of those recipients. That’s the person I would like people to know and to share with everybody, to celebrate, in addition to all of your accomplishments, your tennis career, and as an advocate for women and social change.

Davidson drew laughter from the crowd, recounting how, in 1973, he was paired up with King in mixed doubles at a particularly rainy Wimbledon. King won the singles and doubles titles on Saturday, but as a result of the weather, they were still due to play their quarterfinal mixed doubles match. Davidson shared with the crowd how he was sitting in the locker room awaiting the call that she had to withdraw due to fatigue, only to get a call beckoning him to the court quickly so they could start the match. Together, they defeated Jan Kodes and Martina Navratilova that day, going on to play semis and finals the next day, and ultimately winning the title.

He said, “It’s a typical Billie Jean story, one that I like to tell. There was no way she was going to withdraw, they would have to stop her from playing. Billie Jean has been a fantastic friend, a great supporter. As I say, nobody deserves to wear a Hall of Fame ring more than Billie Jean King. I really appreciate Billie Jean King and we should all appreciate her.”

King accepted the ring stating that it was wonderful to be back at the Hall of Fame, and offering her congratulations to the new inductees. She spent some time talking through the highlights of her career in a question and answer session that the crowd enjoyed. Also during her visit to Newport, King had the opportunity to tour the newly renovated museum at the International Tennis Hall of Fame.

“It is fantastic,” she told the audience. “There’s a lot of interactive things which is much better for the young people. All the new things, the way it’s planned, walking through it, it’s just so exciting. Like Roger Federer’s hologram, if you haven’t been through it, take your children. I also got to see Suzanne Lenglen, who was the first superstar in our sport, and who was my first super shero.”
King concluded the ring ceremony by offering congratulations to the Hall of Fame Class of 2015. The induction ceremony honored former world No. 1 Amelie Mauresmo, six-time Paralympic champion David Hall, and longtime tennis industry leader Nancy Jeffett.
-Advertisement - 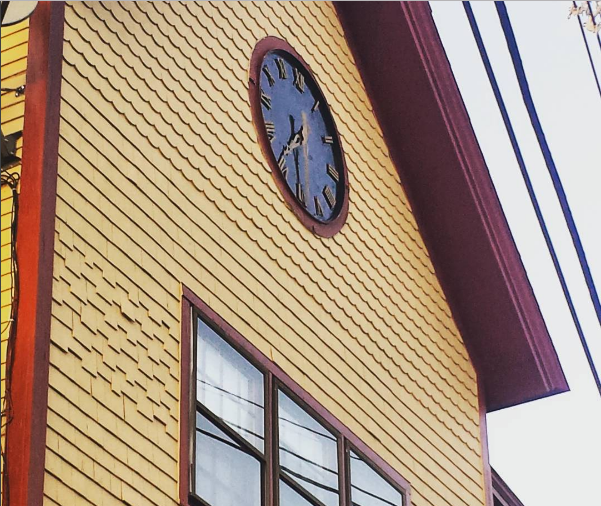