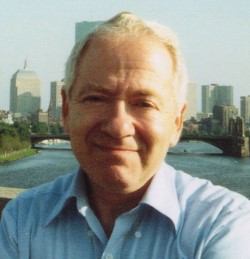 Bob was born in Brooklyn, NY, to the late Alexander and Adele Richardson.

Bob was a graduate of City College of New York and worked as an electrical engineer and technical librarian for Raytheon Company from 1964 until his retirement in 1991, after which he worked for more than fifteen years as a freelance indexer of books. A longtime resident of Barrington and later of Bayview Estates in Portsmouth, he was an avid reader and student of history. He was a member of Channing Memorial Church in Newport. He enjoyed music, particularly jazz, country and western. Bob was a superb carpenter and craftsman, and he remained actively working with his hands, on small projects through the later years of his life. He proudly celebrated his 90th birthday in August of last year.

A memorial service will be held at a later date to be announced.