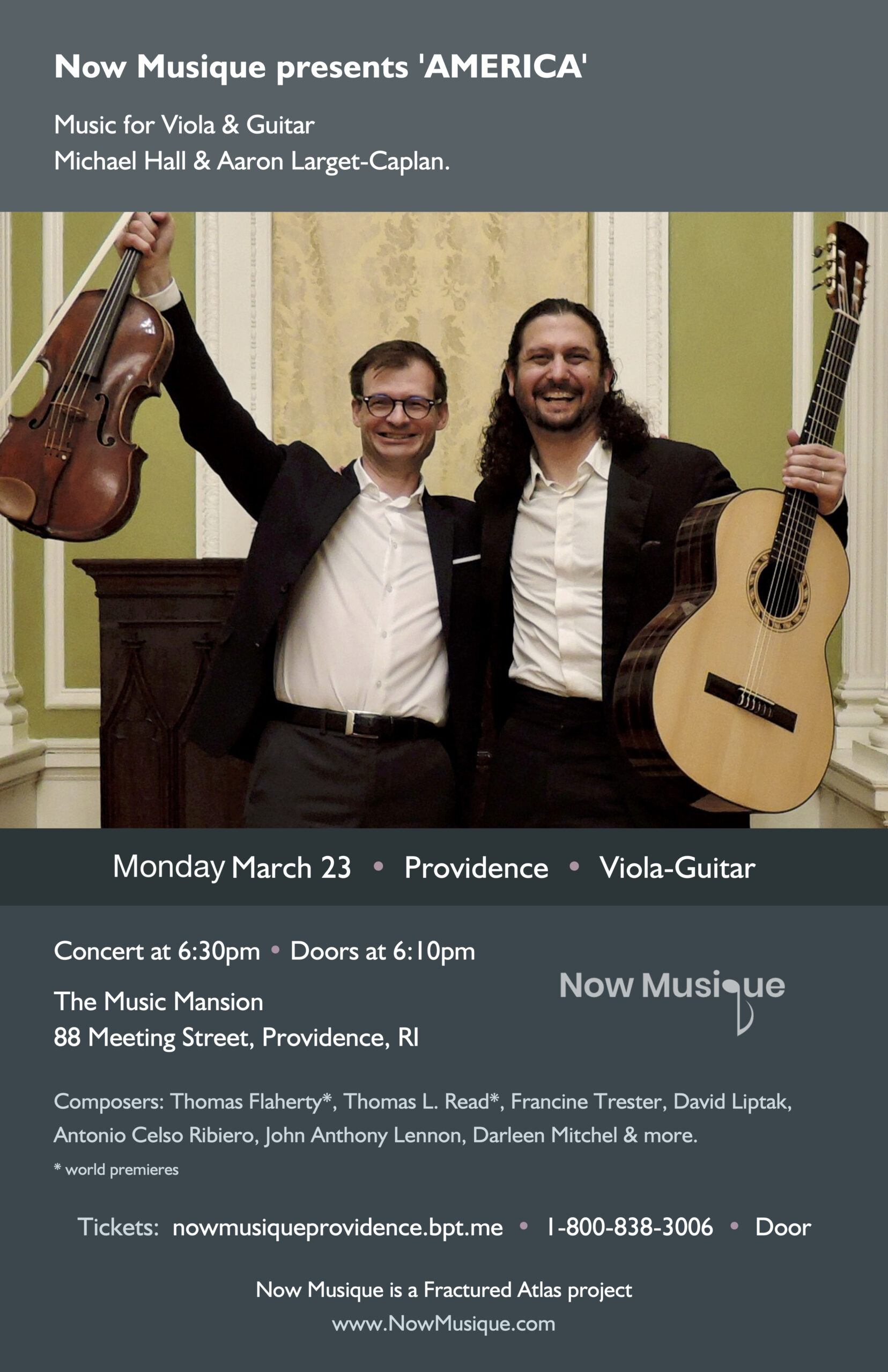 A PROVIDENCE DEBUT WITH AMERICAN MUSIC

“I started ‘Now Musique’ as a means to explore new and neglected music, and I feel it is important for our Art to represent the period in which we live,” said Larget-Caplan. “This concert is very special to me as we live in a time of hyper-nationalism, I thought it would be powerful to show a healthy cultural nationalism by showcasing 21st century music by living composers from the Americas. And though it contemporary classical, the music is quite diverse with something for everyone. We look forward to bringing it to Providence!”

Reserved seating can be purchased through Brown Paper Tickets. A suggested donation of $20 is also available. Doors open at 5:45.

The program is being repeated in New York City at the National Opera Center on Saturday March 21 through the American Composers Alliance, and in Boston at Arlingotn Street Church on Sunday March 22.

ABOUT THE ARTISTS
MICHAEL HALL, viola, lives in Chicago and is an internationally recognized soloist, teacher, and thought leader. Described by the New Music Connoisseur as utterly masterful, and Chamber Music Today as having superb technique, he has collaborated with Pulitzer Prize winning composers and has over 50 compositions written and dedicated to him. His teachers include Scott Rawls, Michelle LaCourse, Peter Kamnitzer, and the Tokyo and LaSalle string quartets.

AARON LARGET-CAPLAN is a “riveting artist”, writes the Washington Post, and the Boston Musical Intelligencer says he has “astounding technical proficiency and artistic delicacy”. Aaron is an international recording and touring guitarist, who connects with audiences with Bernstein-esque ease. He has premiered over 80 compositions, and Edition Peters and Stone Records publish his groundbreaking arrangements and recording of the music of John Cage. He is on faculty at University of Massachusetts Boston and formerly Boston Conservatory. In 2019 Aaron received the Médaille DEtain from the Société Académique Arts-Sciences-Lettres of Paris, France for his trailblazing work in music. www.ALCGuitar.com