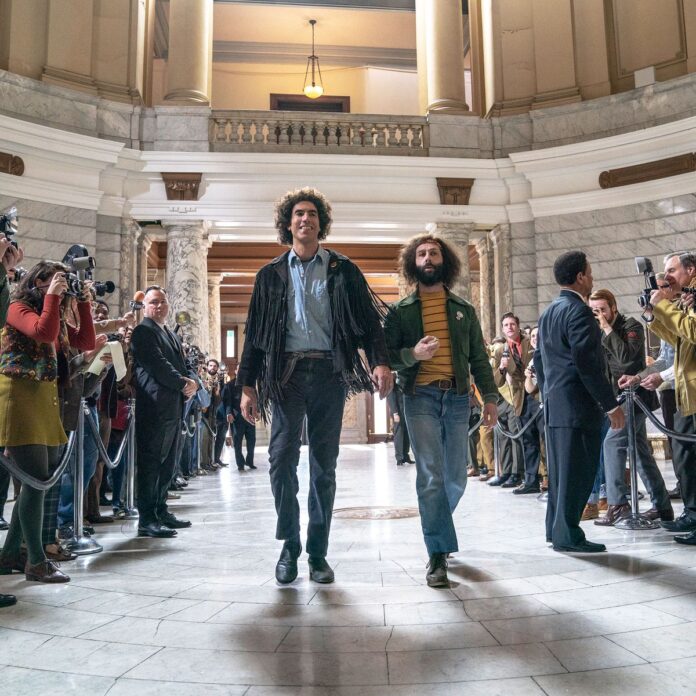 The Trial of the Chicago 7, which dropped on Netflix yesterday after a limited theatrical run, is a film with palpably lofty ambitions. It intends to be the next great courtroom drama, and coming from Aaron Sorkin, the legendary screenwriter whose film career started with A Few Good Men, that’s not an unreasonable expectation. It aims for awards season glory, stacking the cast with recognizable talent and using Sorkin’s trademark verbal sparring to give them plenty of opportunities to shine. It also clearly hopes to be the film of the moment, to tap into the zeitgeist and inspire action at a crucial time in America’s political history. There’s no shame in having ambitions like those, but there is risk: miss your target even by a little, and audience can feel themselves being pushed instead of moved. This movie consistently hits on just one of those three— and probably the one Sorkin cared about the least.

The Trial of the Chicago 7 dramatizes the real trial of a group of high-profile anti-Vietnam activists charged with conspiring to incite the riots that broke out at the 1968 Democratic National Convention in Chicago. Sorkin divides the seven defendants into four groups: Tom Hayden (Eddie Redmayne) and Rennie Davis (Alex Sharp) from Students for a Democratic Society (SDS); Abbie Hoffman (Sacha Baron-Cohen) and Jerry Rubin (Jeremy Strong) from the Youth International Party (Yippies); David Dellinger (John Carroll Lynch) from the Mobilization to End the War in Vietnam (The Mobe); and John Froines (Danny Flaherty) and Lee Weiner (Noah Ribbons), who are themselves confused about why they’ve been included amongst the heavy-hitters. He then makes clear that the eighth man on trial, Black Panther Party co-founder Bobby Seale (Yahya Abdul-Mateen II), shouldn’t have been there at all, and why he was is made painfully obvious.

You might notice from the small headache that paragraph gave you that this movie has a lot of characters vying for the spotlight— I didn’t even get to mention Mark Rylance’s defense attorney, Joseph Gordon-Levitt’s prosecutor, or Frank Langella’s judge, all of whom have significant screen time. For as many moving pieces as he juggles, Sorkin the screenwriter does admirably well, and the performances that followed elevate the entire film. Though the script bets somewhat on Redmayne, Baron-Cohen is the obvious standout as the character most tasked with walking the line between irreverence and sincerity. Strong and Lynch do excellent work on their respective sides of that divide, while most audiences will probably be hating Langella’s character too much to appreciate how well he plays the film’s most substantial villain.

For Sorkin the director, though, managing this many moving pieces is more of a struggle. Flashbacks to the riots fare better, but the trial scenes, the film’s meat and potatoes, are visually uninteresting. A strength of his directorial debut, 2017’s Molly’s Game, was the camera’s ability to reflect the protagonist’s forceful intellect in the same way his dialogue does, and he might be better suited to material that is similarly allied to a single perspective. And in terms of its politics, The Trial of the Chicago 7 struggles to choose between a revolutionary sensibility that indicts the culture at large and a desire to blame individuals (that judge, that Attorney General, that President) for doing wrong with the right institutions. If you’re looking for the film of this political moment, Spike Lee’s Da 5 Bloods confidently has the edge, but viewers of Sorkin’s film will still get an acting showcase with some bite.