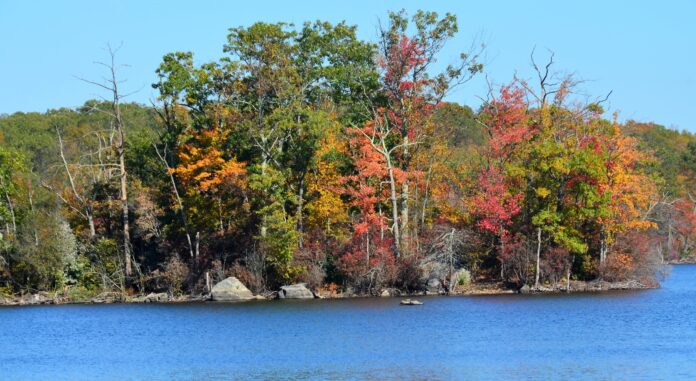 With fall foliage season beginning, and with travel restrictions making it difficult for us to visit the mountains of Northern New England, Rhode Islanders can discover the charming villages, tree lined reservoirs and ocean views that millions of visitors yearly come to experience in the Ocean State.

Typically, at this time of year, Scituate is preparing to host an annual arts festival. It not only attracts beautiful arts and crafts, but shows off this quaint community’s beauty, its trees turning bright orange, red and yellow in the village center and around the nearby Scituate Reservoir. In the harbor in Newport, huge cruise ships, exploring the region’s autumn miracle, stop for a day’s visit to this historic and tourist friendly town.

While its tempting to find treasures in the White and Green Mountains, the Adirondacks and the Berkshires, there are treasures right here in Rhode Island. There are numerous beautiful drives, spectacular views, quaint villages. Here are just a few you might consider for that Sunday drive.

Wilcox Park – In downtown Westerly, this 14-acre gem is adjacent to and operated by the Westerly Library. A gift to the community in 1898 by Harriett Wilcox, the park’s gardens, ponds, memorials featuring the famed Westerly granite masonry, are a backdrop to many community events. The park is also adjacent to one of Rhode Island’s true downtowns.

Various state parks – Among them: Goddard Memorial, nearly 500-acres in Warwick’s Potowomut section, and was once the estate of Civil War officer and Rhode Island politician Robert Goddard, whose children gave the and land to the state in 1927 as a memorial to their father; Bristol’s Colt State Park, more than 460 acres, once owned by industrialist Samuel P. Colt, nephew of firearms manufacturer Samuel Colt; Lincoln Woods State Park, 627 acre park around Olney Pond in Lincoln, and named for Abraham Lincoln;  The Arcadia Management Area, 14,000 acres in Richmond, Exeter, Hopkinton, and West Greenwich.

Route 110 – Head south on Route 110 into South Kingstown, by the Great Swamp Wildlife Reservation and Worden Pond. Turn onto side roads, pass by small ponds and spectacular views.

Jamestown – Beautiful scenery throughout the islands 22 miles of roads, from the village center to water views (including Beavertail State Park) and old forts and historic farms (Watson Farm).

Scituate Reservoir and Northwestern Rhode Island – A drive around the reservoir yields some of Rhode Island’s most beautiful views. Drive by Smithfield’s Apple Orchards, into Chepachet (Glocester) and Western Glocester, to Burrillville, with its woodlands and lakes. The area has many small villages and spectacular views.