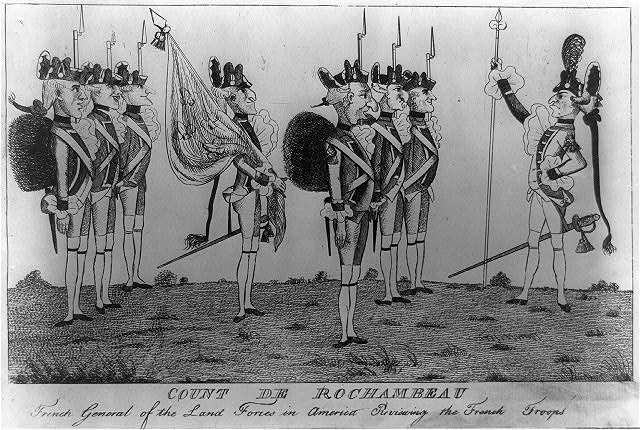 The code name given by the French government for the plan was “Expédition Particulière” and its mission was to support the American rebel forces against Britain in the American Revolutionary War. In English it was known as the Special Expedition.

“[Rochambeau] landed on the 11th of July to an unwelcoming Newport. No one received him; shutters and doors were firmly closed. The French believed they had come to help, but the Americans, apparently did not want them. There were several reasons. Already the comic stage representation of the Frenchman as a sort of dancing master with dandified manners, with a thin little curled black moustache, reeking of perfume, with effeminate manners, was well established.

Perhaps confirming this picture about two years before Rochambeau’s arrival, D’Estaing with a French fleet had been in Newport waters. A joint plan had been developed for a combined Rhode Island militia and French attack on Newport, then held by the English.

As so often happens in joint army-navy undertakings, something went wrong. D’Estaing arrived and even landed some troops but no Americans appeared. A storm was thought to be brewing; a large English fleet was thought to be arriving. D’Estaing re-embarked his troops and sailed away. Then General Sullivan and the Rhode Island militia landed on the north end of the island and approached Newport.

The Battle of Rhode Island followed; and however it is described, it was an English victory and an American defeat. But since no one likes to admit that failure is his fault the Americans readily blamed the French. The English helped. They loudly proclaimed that the French would not fight and could not if they would, that they had no intention of helping the Americans but only wanted to get land for themselves.

These views were readily accepted in Newport by the loyalists, of whom there were many, and also by the patriots, annoyed by defeat in the Battle of Rhode Island. Furthermore, the Newporters had just suffered severely from an army (English) occupation and did not want another, even by a supposedly friendly force.
In spite of the lack of any welcome Rochambeau spent the night of the 11th on shore and next day went to work. His first task was to find an adequate camp site for his soldiers.

They had been on shipboard for about three months; about a third was ill. He was anxious to get them ashore where they could get exercise and a change in diet. He found a satisfactory place and made it clear that the French would pay rent for all land they occupied and would pay, not in depreciating paper money, but in solid silver and gold coins. Then he investigated the possibility of getting supplies, always making it clear that the French would take nothing and would pay for everything they received.

Shutters began to come down; doors opened. Early in the day an official welcoming officer arrived from General Washington; people began to suspect that the French had come, not to seize things for themselves, but by request. Then there was the influence of Rochambeau himself. He did not fulfill the stock picture of a Frenchman. On the contrary, he was robust, masculine, friendly, simple. If he spoke no English and was never to speak it well, he was none the less cordial and outgoing.
By the evening of the 12th opinion had completely reversed itself. The town was brilliantly illuminated, a picturesque and cheering sight to those still on the ships. The next day the French troops began to disembark. They camped amid apple orchards astride what is now Bellevue Avenue about where it is crossed by Narragansett.”

The Rochambeau Statue at King Park, where General Rochambeau landed when he arrived in America in 1780, was erected in 1934 to commemorate the achievements of General Comte de Rochambeau.