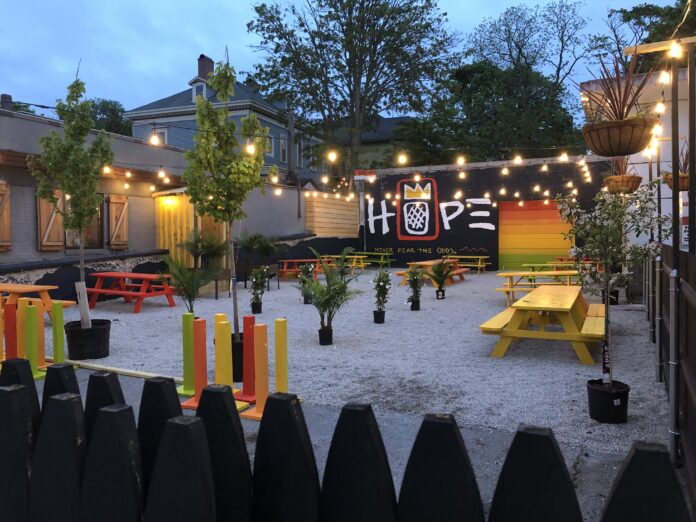 Tonight at 5pm, the team at Fifth Element will launch ‘Outer Element,’ their much-anticipated outside dining space.  Located in the old Foley’s parking lot and adjacent to their restaurant on Broadway, this fenced in patio space has come together quickly over the last few weeks.

Outer Element will be open for both lunch and dinner, seven days a week from 11am until close.  Reservations are encouraged, however walk-ins will also be accommodated on an availability basis.

When Governor Raimondo indicated that she would encourage municipalities to ease restrictions on outdoor dining regulations in order to allow businesses to start generating some revenue, owners Frank Doyle and Brad Cheveraty knew they had a great opportunity to transform their vacant parking lot into something special for their guests.

Doyle, who has been working around the clock to get the patio completed told WhatsUpNewp, “We wanted a space that gave our guests a welcoming, positive vibe.  Even before all this happened, people go out to eat to get their mind off of things and enjoy themselves.  We wanted to construct a patio that was cheerful, upbeat and would help ease your troubles.”

The space is highlighted by a collection of planters and potted trees, a canopy of Edison bulb lights and accented with colorful picnic tables that were built by hand by the owners.

“Those were fun.  My knees hurt, my backs hurts, everything hurts!”  said Doyle, as he shared a photo of his family helping assemble one of the many picnic tables.

“It’s something we are really proud of and excited to introduce to the community” said Cherevaty.

But perhaps the most notable addition to Broadway other than the Outer Element space is the large HOPE mural painted on the cement block foundation on the easterly border of the patio.

The story how this large commission came to be is something that makes you appreciate living in a small city and an even tighter community.  And today, I am more than happy to share that story!

One night, Easton used colored oil sticks and a can of yellow spray paint to create the original on a white metal panel that was hanging from the former Foley’s gas station.

The property, which was purchased by the owners of Fifth Element in 2016, has a history of displaying and supporting local art and has featured from the likes of Providence native, Chris Wyllie, including their signature Buddha piece that lines the back of their dining room.

However, the art they are known for showcasing has always been purchased or commissioned, never vandalized.  “I didn’t ever ask if it was ok to do it, I saw a blank canvas and I saw an opportunity to express an idea on Broadway.”

Easton has a deep-rooted background in creativity.  A self-taught designer and visual artist, Philip spent most of his childhood admiring the visuals on skateboards and surfboards.  He was born into a family with ties in the New England action sports scene and was heavily influenced by those around him, including his older brother Adam.  Along with his portfolio of graphic design and visual art, Easton also owns local streetwear clothing brand Legends Limited.

This isn’t the first time his street art has popped up in Newport.  If you’ve ever been to Fifth Ward liquors, you’ll know exactly what I mean.  His signature piece however is now his most recognizable. “I wanted to this concept to embody something uplifting and something positive.”

“It fits the culture of Broadway.  It has that urban, city-like feel,” says Easton.

The meaning of the design itself is self-interpretive but it’s inspiration stemmed from a foundation based on achieving a higher purpose.  “A pineapple wears a crown, meaning it’s reached the pinnacle of its purpose.  It’s about being the best possible you, that you can be, regardless of what you’re doing.”

“The ‘HOPE’ piece represents the hurdles that I have been faced with in my personal life and thankfully overcome.  Honest, it could have gone either way, good or bad.  I know people face that each and every day.  I hope this gives them whatever it is that they may need.  There’s a sense of satisfaction when someone overcomes obstacles in their life.  No matter how far down you’ve fallen, you can never give up HOPE.”

About a week after he painted his original HOPE design, I was having dinner at Fifth Element and asked Frank Doyle (who was bartending that night) what he thought of the renegade art piece that someone painted on his building.  His response? “I actually think it’s really cool. We are going to leave it up”

Just over a year later, Fifth Element owners Frank Doyle and Brad Cherevaty reached out to Easton for a commissioned piece to highlight their new patio space.

“Phil was the right guy at the right time for this.  We loved the his tag so we left it.  It’s honestly a shame it was stolen, I really liked that piece so I was bummed.  When the time came to conceptualize Outer Element, we knew we wanted him to be a part of this.”

For Philip, it came as a shock.  “It’s pretty crazy the story about how we met.  I was with my friend’s mom, Linda Lee Butler, who is also a local artist and she wanted to see the original piece, so I took her down to Broadway.  As we were standing there checking out the piece, Frank pulled up and got out of his car.  He looked as us and said, ‘it’s a really cool piece, huh? Very different and unique’  I didn’t know who he was at the time and Linda straight up threw me under the bus and said ‘well he’s the artist who did it!’  I couldn’t believe it.  He introduced himself that day and told me he was an owner of Fifth Element, a year later he’s calling me saying ‘Hey Phil! I just painted this wall; would you be interested in doing mural for us?’
“It’s pretty wild.  Like something out of a movie.”

The original piece was unfortunately stolen a few months later.

All of Easton’s original artwork (minus the stolen street art) as well as fine print work is  available for sale on his website, www.eastonxart.com, including pieces that have been featured in local galleries and showcased at local festivals.  Although some pieces have recently sold, there are plenty of opportunities to own an original.

Along with the commissioned mural, Easton will also be offering a series of original pieces that will be created on the same medium as the original ‘HOPE’ piece, a metal panel from the Foley’s Gas Station.  The pieces, all one-of-one designs that are hand painted will be available for purchase at Outer Element.

Doyle says he has opened many restaurants in his life but ‘Outer Element’ is the one that he is most proud to call his own.  “This all came together so fast but I couldn’t be more proud of what he have accomplished here.  Out of all the projects I have been involved in, this is my proudest.”

There were a lot of moving parts that contributed to this project; Frank and Brad wanted to give credit to those who were so influential in helping get this done.

“We want to extend a big thank you to the City of Newport for allowing us a fighting chance for our concept of ‘Outer Element’ to be born.  Jeff Lipshires of J2 Construct, East Coast Construction, Byron at All Island Landscape and of course all our wonderful friends, family and customers for their continued support through this difficult time.  And of course, to Philip Easton, the incredible artist who created his “HOPE’ mural that anchors our joyful, fun space and that this serves to inspire our community to push through the hard times and keep your sense of humanity.  Stay safe everyone!”

The mural opportunity and pop-up neighborhood gallery is unlike anything that Easton has ever done before and the new ‘HOPE’ piece is his largest work to date.  Along with excitement, Easton says he is filled with appreciation. “I really can’t thank Brad and Frank enough for this opportunity.  It’s crazy to think this went from a fun, street art project to them featuring my art at their establishment.  It’s so incredibly humbling.”

In addition to the guys at Fifth Element, he admits that none of this would be possible without the support and patience of his wife Abby.  “She’s always been there to give an honest opinion and a push when my confidence was low.  But most importantly, for holding down the fort at home and putting up with my madness, I honestly couldn’t do any of this without her.”

I live just up the road from the Fifth Element and this piece is a daily reminder for me to be the best I can each day and hope for the best.  It has been a daily reminder for me since the original popped up last March.  As someone directly involved in the Newport hospitality scene, the HOPE design took on a different meaning for me personally and it became an immediate reminder of so many different things.

The pineapple has been a symbol of hospitality in Newport since the 1650’s.  Boat captains used to place them outside their door after returning from the Caribbean to show safe passage and welcome their neighbors over.  I have two pineapples tattooed on me and the restaurant industry has introduced me to so many people and helped open so many doors in my life.

The word included in the design, ‘Hope,’ for me is a reminder of two different things; the first being Rhode Island, the beautiful place I am so proud to call home.  The official state motto of the Ocean State, ‘Hope’ is also the shortest in the United States.  It is the perfect phrase for the foundation that Rhode Island was built upon.

The second reminder is the actual meaning behind the term.  Hope is essentially an optimistic state of mind, based on an expectation of positive outcomes with respect to events and circumstances in one’s life or the world at large.

In a time where our country is surrounded by a looming cloud of uncertainty due to the Covid-19 pandemic and increasing civil unrest because of continued social injustice, there has never been a more appropriate time for such a message. As a community, we need to join together during this time and HOPE for health, HOPE for peace, HOPE for equality and HOPE for the future.

Thank you, Philip and Fifth Element, for providing us with that much needed message.