According to the City, shortly after 11 a.m., Newport Fire Crews were dispatched through choppy seas for a report of a fishing vessel that had caught on fire.

Crews from the U.S. Coast Guard Station Point Judith assisted Newport Firefighters by transporting 3 crewmembers from the 40-foot burning fishing boat in Narraganset Bay safely to shore, according to the City. By just after 1 p.m., the boat reportedly began to take on water and subsequently sank to a depth of approx. 105-feet. 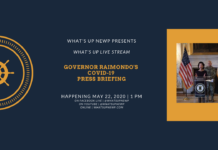