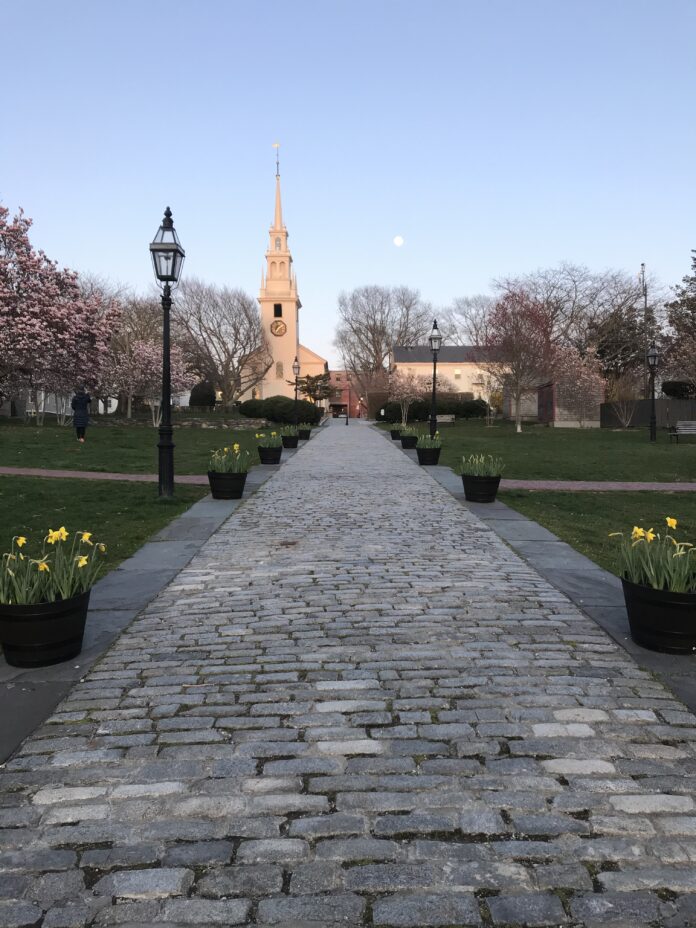 Today marks one month that I’ve been practicing social distancing, though it feels like much longer. I returned home from a weekend ski trip on Monday, March 9th and that day, my husband and I decided that we’d begin taking social distancing seriously given that he falls into a high-risk category. Since then, we’ve only left our apartment to go for walks or to the grocery store, and have done our best to stay at least 6 ft away from every other person we see when we’re out.

As both a means of documenting this unprecedented time and coping with it, we’ve been keeping a joint journal to keep track of our thoughts, emotions and observations during the crisis. Below are some of the most important insights and themes that have emerged for me in the past month.

A new appreciation for technology. It’s been in vogue to harp on the downsides of tech for years now. Smartphones are addicting and giving us all bad posture. Social media is also addicting and linked to higher rates of depression. The internet facilitates the spread of misinformation. All of these things may hold truth, but imagine having no internet, phone or streaming entertainment during this pandemic. I was catching up with a childhood friend in the past week and I remarked that I wish this had happened back when we were in high school instead of now, so that we could have missed school. “Do you know how bored we would have been?” she texted, reminding me that when we were in high school in the early 2000s, we would have had to download music on Napster, Limewire or iTunes. She had a very good point. Flip phones at the time were not “smart” – you could call or text and that was it. If we wanted to connect with all of our friends at once, there would have been no Google Hangouts or Zoom meetings. We would have had to use the old dial-up modem (which rendered the home landline “busy” and unable to receive calls), signed onto AOL Instant Messenger and created a “chatroom”. As invasive as tech has become, this moment allowed it to prove its true value. Tech has been the lifeline enabling many of us to continue working, stay connected to our loved ones, and delivering our entertainment.  Could we survive this without all our newfangled tech? Yes, but it would be immensely harder.

We’re all better at improvisation than we thought we were. I’ve always deeply admired improv comics – their ability to think creatively and pivot so quickly is impressive on its own, but to do it on stage while everyone’s watching takes true bravery. The pandemic has required us all to practice improv in multiple aspects of our lives, with our families and coworkers as our audience, and oftentimes with unintentionally comical outcomes. Working parents of young children who are currently working from home, providing childcare and facilitating distance learning all at the same time are the champions of improv right now. Many people who might be a little camera shy typically have had to get used to seeing and hearing themselves on video daily in order for work meetings to continue and for relationships with friends and family members to stay maintained. Many of us who’ve been trying to stay active have had to improvise by temporarily transforming our living rooms, dining rooms and basements into fitness areas and turning furniture and household items into workout equipment. I’ve been tuning in for  virtual yoga and workout classes with Mend but since I don’t have lightweight dumbbells in my apartment, I’ve been using canned vegetables instead. Hand sanitizer has been impossible to find in stores and back-ordered for weeks online, so my husband and I made our own hand sanitizer out of grain alcohol and aloe vera gel in the meantime. We’re all more adaptable, fast-thinking and better improvisers than we thought we were.

Maintaining structure is extremely important when it comes to food and media consumption. During the first week and a half of social distancing, my media and food consumption was not under control. I had CNN on in the background every day and found myself checking Reddit and Twitter incessantly. With anxiety over the constant stream of bad news and a stockpile of food now in my apartment, I was reaching for snacks around the clock mindlessly. I felt physically terrible, my face broke out horribly, I was constantly anxious and experienced headaches. In the past few weeks, I’ve reigned it in. My husband and I agreed to take turns making meals for each other at certain times of day, which has stopped the constant snacking and eating alone. We both agreed that viewing the federal government’s press conferences provided little value and was, ultimately, detrimental. So, we stopped tuning into those altogether. Every day, we take a break at 1pm to get our updates from Governor Raimondo’s daily press conference and have lunch. I am feeling much better mentally and physically now with a semblance of structure around food and media consumption than I was during week one.

A crisis facilitates reconnection.  Reconnecting with distant family members you haven’t spoken to in ages or friends you may have lost touch with over the years has been a pleasantly unexpected outcome of the pandemic. A crisis is a good opportunity to take stock of the people you’ve really cared about throughout your life and to make time to catch up with them now that you have plenty of it. But a word of caution when it comes to reconnecting – keep your boundaries. A pandemic is still not a reason to get back in touch with a problematic ex or reconnect with anyone who’s not in your life anymore because they treated you badly.

Determining what’s necessary and what is not has revealed some surprising truths. I think it’s safe to say that none of us will ever take toilet paper for granted again after this. The things we need for basic living and comfort are now requiring more effort to obtain and oftentimes involve some risk. Getting fresh fruit and vegetables from the grocery store, for example, means entering a potentially risky situation for yourself and others. Sure, I could subsist on a stockpile of canned foods, peanut butter and crackers and not go back to the grocery store for months, but instead I chose to go to the grocery store three times during this period to get fresh vegetables and fruit. I realized, each time I chose to go, I was making the decision that things like kale, apples and bell peppers were worth a risk. This was surprising to me to think about, and I’m also acutely aware that it’s a privilege. On the other hand, my online shopping habit for unnecessary things like clothing, shoes, jewelry and make-up has 100% stopped. I’m more comfortable going about my day at home, where I’ll be for the foreseeable future, in yoga pants, sweats and t-shirts. There’s nowhere to wear new shoes and clothes to, so why would I buy them? These are all things for other people to see and since no one’s there to see them, they don’t matter much. It makes you realize that many of the things you may have thought you were buying for yourself, you were really just buying for other people.

Biological systems and manmade systems are not equally important. To take a walk outside and see the crocus, forsythia and daffodils blooming brings on a strange feeling this year. On the one hand, a heightened awareness of all the symbolism we humans assign to these colorful harbingers of spring: Resilience. Renewal. A much-needed reassurance that life does go on. On the other hand, an affirmation that life goes on…without us. Regardless of us. Indifferent to us. Despite us. I caught this tiny thought passing through the background of my brain: “How inappopriate of the flowers to mock us by looking cheery right now.” As if flowers exist for us. As if they’re aware of the emotions and meanings we assign to them. As if they should not bloom and pause life because human life has been paused. We like to think of ourselves as “stewards” of nature – a comically naive concept to ponder now that we’ve been reduced to our basic biological weakness. We’re at the total mercy of nature, no more or less exempt from its forces and ecological processes than any other animal. Any system we’ve made to carry out our modern lifestyles – “economy”, “sovereignty”, “laws”- all abstractions that don’t function well and begin to fall apart under the pressure of a biological crisis. Economies don’t exist alongside or independent of nature, they are in fact wholly owned subsidiaries of nature. When this crisis passes and we revisit the problem of climate change, to still argue that the economy is equally or more important than mitigating a biological crisis would be the biggest missed lesson.

Every crisis is different, but every crisis reveals the best in humanity. By now, I’ve lived through a few different catastrophes of varying severity. I was a teenager in northern NJ during the 9/11 attacks. I was working in financial services in lower Manhattan when the economy collapsed in 2008. I hunkered down with family in New Jersey and got by without power for a few days after Hurricane Sandy hit the area in 2012. And if we’re counting the Great Aquidneck Island Gas Outage of January 2019, this would be my fifth crisis. This one is a lot different in many ways, but what’s not different is the response of people. Many like to look to Mr. Rogers’ famous quote about “finding the helpers” in times of catastrophe. It’s good advice, and in an effort to follow that sentiment, I’ve been highlighting just a few the Unsung Heroes in our community who have come forward in the past weeks to help out in many different ways. Connecting with them and telling their stories has personally helped keep my positivity and hope up, and I hope it’s given some hope to our readers as well.