This story was originally published on February 5, 2018, it has been republished because of its historical significance.

The predictions were far less than the outcome. As the storm was forming 40 years ago today (Feb. 5), it was supposed to be heavy, ending on the evening of Feb. 6. It didn’t.

It went on for 33-35 hours, not ending until sometime Feb. 7. Snow totals reported to be well over 30 inches, nearly five feet in some spots, winds up to 70 miles an hour, resulting in snow drifts of over 20 feet.

Rhode Island was paralyzed. Businesses closed, transportation at a standstill, some people stranded in cars, thousands of cars abandoned on highways throughout the Northeast. 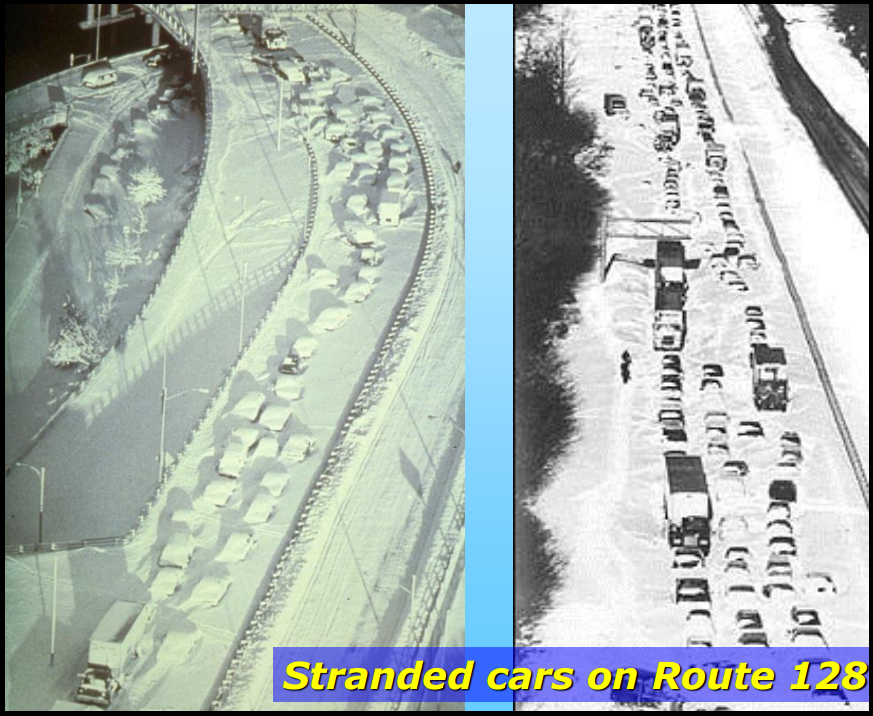 About 100 people died in the Northeast, some in their cars.

I was managing the Providence Journal’s Greenville office at a time that the newspaper had bureaus around Rhode Island, in nearby Massachusetts, and in D.C. We were poised to cover anything, anywhere in our state, even a massive snowfall, even the worst blizzard in Rhode Island’s history.

Greenville is in that area of Rhode Island where snowfalls are usually heavier. No difference here. We measured 56 inches in front our Greenville Avenue office.

Most in our office had headed home or tried to get there. Bob Jagolinzer (now deceased) made it only to North Providence, joining Alan Rosenberg (now the Journal’s executive editor) and myself the next day. He had spent the night in a gas station in North Providence and hitched rides on snowplows to get to the office.

I had arranged for snowplows to pick us up. Alan on one, me on another. It didn’t take long, with snow falling at two and three inches an hour, for my driver to give up, fearful because his route was around a lake we could no longer see.

We slept on our desks and dined on junk food we were able to buy before the nearby convenience store closed. Restaurants didn’t open for a few days.

I located a place for the Journal to rent snowmobiles, used to bring employees to work. I used one to ride around the local area in the aftermath of the storm.

During the storm, we were shut in our office in Greenville, fortunate not to lose power. There were no nearby motels.

The newspaper, true to its tradition, never failed to print, its early editions just distributed in Providence, where thousands were camping out in downtown hotels. 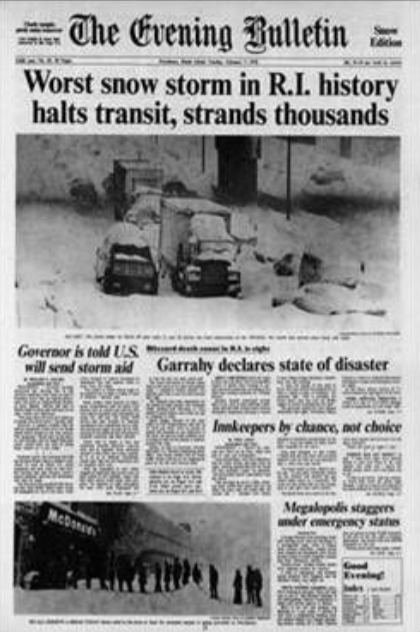 When the snow ended, it seemed the village of Greenville came to life. Snowmobiles, cross-country skiers, kids with sleds being pulled along by parents. Restaurants that were closed re-opened.

We went to a strip mall near the bigger Apple Valley Mall and found a small bar open. We climbed over the roofs of cars buried in the snow, finding two men inside, playing pool, eating peanuts, drinking beer. They couldn’t get home, they said. And where did they live? Just around the corner.

It was a snowstorm, a weather event like none other. It was frightful, it was deadly, and then … when the snow stopped, while Rhode Island began digging out, the community came together.

In villages like Greenville, people went outside, no work to go to, but neighbors to greet, people they hadn’t seen in weeks or months. They helped the elderly, handicapped … neighbors coming together.