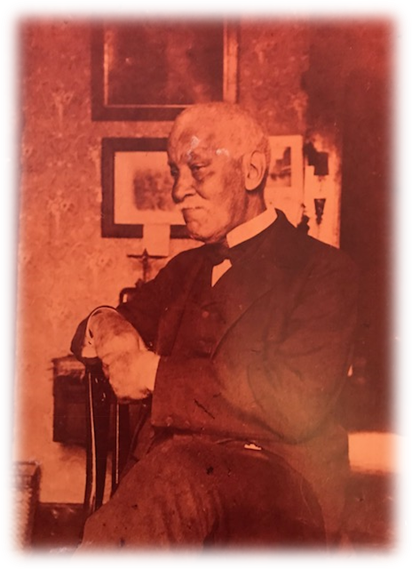 This week, Keith Stokes, Vice President of the 1696 Heritage Group, brings us a look at the businesses that were owned and operated by Newport men and women of color.

Newport’s African heritage history dates back to the 17th century. During the 19th century there are four vibrant African heritage churches within the Bellevue Avenue, Historic Hill and West Broadway neighborhoods. These neighborhoods also hosted numerous businesses owned and operated by Newport men and women of color.  This is a sample of photographs of businesses and the people who operated them.

Arriving in Newport by the mid 1840’s, George Downing would become one of 19th century Newport’s most successful hospitality entrepreneurs.

Downing lobbied tirelessly to officially desegregate Rhode Island public schools, beginning in 1857, by which time he was well-established in Newport as the proprietor of the Sea Girt House luxury hotel along with a confectionary and catering business along Bellevue Avenue on the Downing Block.

He would later lead for the repeal of the state’s ban on interracial marriage, and racial discrimination in the reorganization of the Rhode Island militia. Downing helped purchased Touro Park and founded the American Colored Union Labor League.

Mary Dickerson and her husband Silas arrived in Newport from New Haven, Connecticut around 1865. By 1872 she established a “Fashionable Dressmaking Establishment” at 5 Travers Block servicing the needs of Newport’s summer residents.

Armstead Hurley arrived in Newport from Culpepper County, Virginia around 1886. He would soon establish a successful painting business along with being a founding partner in the Rhode Island Loan & Investment Company, the first black-owned bank in Rhode Island.

Dr. Van Horne was born at 47 John Street in Newport in 1871 and graduated from Rogers High School and Bryant Business College in 1889. He would graduate from Howard University Dental College in 1896, and become the first African heritage dentist in Rhode Island with offices at 22 and 166 Broadway. In 1920 Van Horne is a part of the organizers of the Newport Branch NAACP.

J.  T. Allen and his brother D. B. Allen came to Newport in 1893 and established several restaurant and catering businesses.  J. T. was the managing proprietor of the “HYGEIA SPA,” at Easton’s Beach.

Soon after the brothers would open a restaurant at 29 TOURO STREET, in the historic Perry Mansion, under the Lawrence Club, one of the most aristocratic clubs of the city.