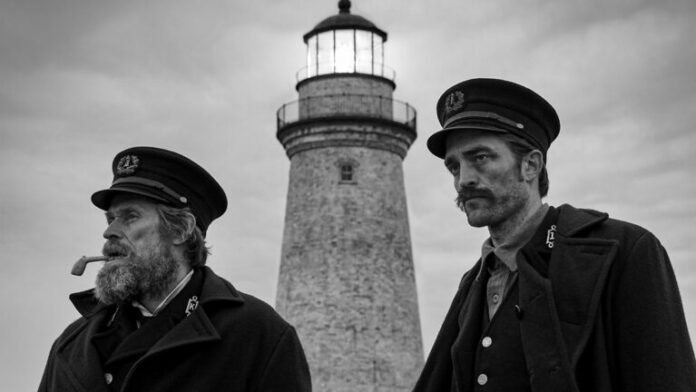 When Robert Eggers made his directorial debut in 2015 with one of the best horror films of the decade, it was clear that he had a unique talent for crafting atmosphere. With its combination of dedicated production design, heavily researched colonial-era dialogue, and gripping performances, The Witch was a fully realized Puritan nightmare, each frame infused with an oppressive dread that seemed to emerge from the forest that encircled the central farm. In a year that has seen acclaimed sophomore efforts from horror directors like Jordan Peele and Ari Aster, expectations were high for Eggers’ second film, The Lighthouse, to continue the trend. Its reported synopsis, following two late-19th century lighthouse keepers as they struggle with isolation and insanity, sparked hope that it would.

The end result absolutely delivers, but in a way no one could have seen coming: The Lighthouse is another masterclass in atmosphere, but because this film explores madness, Eggers does everything he can to make the entire viewing experience utterly insane. The film is difficult to classify in terms of genre, eliciting laughter as much as it inspires terror, and the tone often transitions from horrific to comedic to dramatic quite suddenly — surreal dream sequences, fart jokes, and intense monologues coexist as if they are, and have always been, natural on-screen companions. The passage of time is distorted and scenes of routine labor bleed into supernatural visions without warning, making the plot difficult to predict, even as everything feels strangely fated. Suspicion and superstition reign on this barren rock, and chasing the truth is as treacherous as navigating the surrounding sea.

The effect is intentionally disorienting, but the excellent craftwork at all phases keeps it from becoming alienating. Much like The Witch, the world of The Lighthouse is brought vividly to life by its period dialogue and production design, and the outstanding sound design ensures the viewer feels totally immersed within it, foghorn and all. The black-and-white cinematography and square aspect ratio evoke the silent cinema of the era, but they also combine for another unique effect — because the film does not project onto the entire screen and certain parts of the set are often black, some shots make the edges of the projection almost disappear, as if the confined spaces of the lighthouse could actually stretch off into infinity (this is one reason to see this film while it’s still in theaters).

Of course, The film’s greatest assurances of viewer engagement are the phenomenal performances from Willem Dafoe and Robert Pattinson as the grizzled lighthouse keeper and his new assistant. The story begins with Pattinson’s arrival and is told primarily from his perspective, and it is through his anguish and unraveling that this nightmare world becomes tangible. Scenes between the two are never straightforward and always riveting, and they handle the script’s sudden tonal shifts beautifully. The Lighthouse would never have been so gripping without their total willingness to inhabit the film’s insanity.

That insanity is not without its drawbacks, however — making reality as inaccessible to the viewer as it is to the characters complicates investment in the narrative arc, and not being able to experience the ending as the culmination of a character’s journey lessens its potential impact. Still, The Lighthouse remains the year’s most unique cinematic experience, and if you won’t find yourself deeply moved long after the credits roll, you’ll still have spent two hours in total awe of its incredible filmmaking.