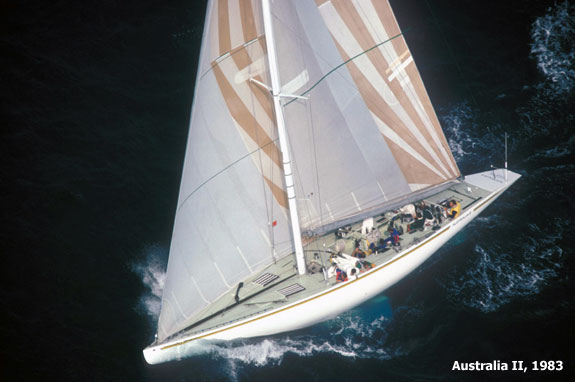 It was on September 26, 1983 that Australia II defeated Liberty in Newport to win the America’s Cup trophy that had been in the hands of the New York Yacht Club since the competition begain in 1851.

The 1983 America’s Cup was the occasion of the first winning challenge to the New York Yacht Club, which had successfully defended the cup over a period of 132 years. An Australian syndicate representing the Royal Perth Yacht Club fielded the Australia II, skippered by John Bertrand, against defender Liberty, skippered by Dennis Conner.

Australia II came from behind to prevail 4 races to 3 to win the America’s Cup, ending the longest winning streak in sporting history and ending U.S. domination of the racing series.

The victory on 26 September 1983 was a landmark event for the nation of Australia, not to mention the Royal Perth Yacht Club. The achievement was underscored when Australia II was awarded the ABC Wide World of Sports Athlete of the Year for 1983.

While the America’s Cup World Series has taken place in Newport since then, the race itself has not returned to Newport.