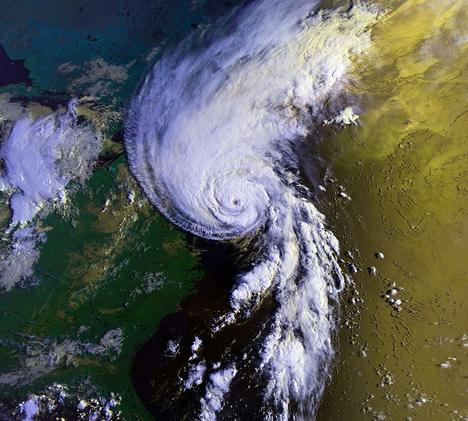 Hurricane Bob developed in the central Bahamas on August 16, then steadily intensified and reached hurricane status on the evening of August 17. Bob continued to strengthen during the next 48 hours, as it began an acceleration north-northeastward, paralleling the East Coast. The eye of Hurricane Bob passed over Block Island, Rhode Island at approximately 1:30 PM, and made landfall over Newport, Rhode Island shortly before 2 PM.

Hurricane Bob brought sustained hurricane force winds to the immediate coastal communities of Rhode Island and most of southeast Massachusetts. Strong tropical storm force winds blew across the remainder of the region, with many areas receiving gusts to hurricane force east of the Connecticut River. Wind damage to trees and utility poles was common and resulted in numerous power outages. Over 60 percent of the residents across southeast Rhode Island and southeast Massachusetts lost power. Damage was also extensive to apple and peach orchards across these areas.

Coastal communities bore the brunt of the storm, with sustained winds between 75 to 100 mph. Peak wind gusts to 125 mph were recorded on Cape Cod in the towns of Brewster and North Truro, as well as in Wethersfield, Connecticut. The highest sustained wind of 100 mph, was recorded in North Truro. Block Island reported sustained winds of 90 mph, with gusts in excess of 105 mph (maximum speed of equipment). Wind gusts to near 100 mph were recorded in Newport and by the Navy Ship Samuel B. Roberts, which was riding out the storm on the east passage between Newport and Jamestown, Rhode Island. Additionally, there were four reports of tornadoes as Bob came ashore. The lowest barometric pressure was recorded by the USS Valdez while in the east passage of Narragansett Bay, with a reading of 28.47 inches.

Hurricane Bob caused a storm surge of 5 to 8 feet along the Rhode Island shore, but drove a surge of 10 to 15 feet into Buzzards Bay. The Buzzards Bay shore east to Cape Cod was hardest hit. The highest surges, of 12 to 15 feet, were observed in Onset, Bourne, Mashpee and Wareham, at the head of Buzzard’s Bay. Cove Road, in Mattapoisett, Massachusetts had 29 of 37 homes destroyed, while Angelica Point, Massachusetts lost 32 of 35 homes along the shore. Boat damage was significant, as many boats were torn from their moorings. Extensive beach erosion occurred along the shore from Westerly, Rhode Island eastward. Some south facing beach locations on Martha’s Vineyard and Nantucket islands lost up to 50 feet of beach to erosion.

Bob was responsible for six deaths in the region, all in Connecticut. Total damage in Southern New England was approximately 680 million dollars.

2. Photo was produced from data from NOAA-10, provided by NOAA.